Goin’ Through the Motions

Dragon Quest upholds tradition with every new iteration. Its mechanics have certainly been streamlined since the days of the original game on the NES, but Dragon Quest IX: Sentinels of the Starry Skies will fool no one familiar with the series into thinking it is a bold break with the past. Many welcome refinements have been included to allow for easier entrance by those with little knowledge of the experience, but the game will not impress anyone who despises everything Dragon Quest. Anyone who has ever had a glimmer of interest in the series will likely find this the easiest installment to pick up, however, and the potential rewards for doing so are plentiful.

Invisible to the mortals below, winged Celestrians perform the task of aiding those in the lower world to obtain Benevolessence. Celestrians have been charged with this duty for eons in the hope of eventually reviving Yggdrasil, thus reuniting them with the Almighty’s dominion high in the sky. The player takes the role of an inexperienced Celestrian who has become the only pupil ever accepted by Aquila, a renowned figure. Conveniently enough, after going down to the mortal world for the first time, the Benevolessence acquired is just enough to revive Yggdrasil, but the reaction is not quite the uniformly positive one Celestrians had been expecting.

The player regains consciousness in the mortal world afterward, now shorn of halo and wings. After being filled in on the course of events by a fairy named Stella, the majority of the game’s course is dictated by a need to recover the Fyggs, fruit produced by Yggdrasil that was lost in the unexpectedly energetic incident. Recovering the Fyggs is an episodic journey that goes through numerous vignettes in the mortal world, most of a melancholy nature. While not among the tales that will be recounted in legend years from now, Dragon Quest IX‘s story is entertaining enough, though the focus upon NPCs instead of the combat party may repulse some due to the lack of main party character development. Instead, the inhabitants of the various locales that are visited throughout the game receive the lion’s share of story time, granting each region and its population a distinctive feel. The high-quality localization also keeps things interesting, unless constant puns perforate player pleasure.

To see it in motion, combat may look much more involved than in other Dragon Quest games. Enemies are visible while moving about and can be avoided, while during an encounter the participants run around constantly to get close to their targets. This appearance of energetic action is nothing but a pretty veneer, for the combat is essentially the same as it has been since NES days, with the fighters acting according to random turn order. A couple of new tricks have been added to the Dragon Quest combat repertoire, such as each class having a Coup de Grâce that triggers randomly, and the ability to increase an attack’s power if it lands immediately after a strike on the same opponent. These new aspects are still subject to the random nature of Dragon Quest combat, making them interesting but unreliable. 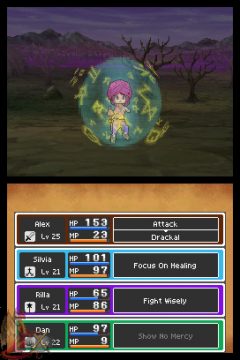 Setting up the party for battle is much more amenable to extended discussion. The initial character creation system allows for a nice variety of looks, and before long the game allows additional characters to be created, since the main character will be hard-pressed to survive alone. Initially each character is fixed as a certain class, but after a plot event anyone can change class to something else once level fifteen in the current discipline has been reached. The level requirement isn’t a bother, because sinking considerable time into each class is the only way to make it useful. Characters level separately in each class, with the only constant component being skill points and levels, which are gained when set levels are reached. This system is potentially very rewarding, if the requisite grinding with multiple classes is accomplished.

Each class levels separately for each character, which makes the skill system important. Most of its tangents are weapon-specific, granting increased prowess with whatever a particular class can equip, and plugging one hundred skill points into an implement makes it usable by any class for that character. Each class also has a line of skills that is unrelated to weapons, and offers useful abilities and permanent statistic increases that are effective for that character forever. The skill system is rewarding to tinker with, and successfully entices players to seek out the copious combat that will be necessary to make good use of it.

Dragon Quest IX‘s inventory system requires careful management, since each character can only hold eight items for use in combat, thankfully excluding equipment. This aspect makes good sense, since it requires that a little planning be done before major battles; the game’s real interface hiccups are left for shop navigation. Only one kind of item or equipment can be sold or purchased per transaction, and only after that money transfer will the shopkeeper let something else be bartered. This is incredibly time-consuming, particularly when the inventory is full of things that the player would rather sell, and makes shopping take awhile. 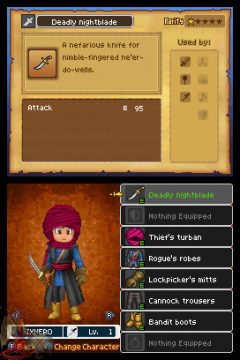 What also takes awhile is accumulating the money to purchase equipment. Enemies in Dragon Quest IX do not deliver significantly more money as the game proceeds, but the cost of new equipment continually rises. Class changes necessitate new attire, and acquiring it can take a very long time. An alchemy system steps in to ameliorate the need to buy everything, but finding the ingredients for good creations requires a long period of scouring the environment. Either way, upgrading the party’s armament will take time.

DS 3D graphics have a negative reputation, but Dragon Quest IX demonstrates how they can be done well. The animation in combat may be superfluous to battle resolutions, but as eye candy it does a fine job. Every piece of equipment a character is using looks distinct, and the plethora of available looks is often enough to elicit extraneous acquisitions simply to see the result. Some pixelization is apparent when the game zooms in too closely, but the 3D capabilities of the DS are demonstrated amply herein.

Koichi Sugiyama’s score is not as sumptuous as the visuals, unfortunately. The music is pleasant to hear and certainly not an embarrassment, but usually fails to be memorable. A few tracks do achieve standout status, and the compositions as a whole are never obnoxious to hear, but more variety through the majority of the game would have been most welcome.

Completing the central plot, which can probably be done in thirty hours by the dedicated, is far from the end of Dragon Quest IX. Numerous new areas are accessible only after seeing the credits, and these areas are populated by denizens that demand to be taken seriously. The game as a whole is not particularly challenging to RPG veterans, but its difficulty starts to increase near the end, and the postgame content is on a different level. Even without delving into this aspect of the game, enormous quantities of optional material can be found throughout, and finishing everything will take a long time.

Dragon Quest IX does a good job of integrating a few new elements into the series while keeping close to tradition. As such, it will not entice anyone who has always hated everything about Dragon Quest into liking the game, since most of the core elements that define these games remain. Grinding is necessary and expected in combat that looks snazzy but hasn’t changed too much since the first game in the series was created back in 1986. Dragon Quest IX does a good job of appealing to a broader audience than its forbears, but simply doing away with random encounters has not suddenly made the series into a radical innovator in the RPG world.