If there’s one area that indie RPGs have covered well, it’s throwbacks to turn-based RPGs of the late 80s-early 90s. Dragon Fantasy Book I is another apparent instance of using these tried and tested basics to both help learn the ropes and give RPGamers another excuse to get all nostalgic for the good ol’ days. Previously released in 8-bit form on iOS, Android, PC, and Mac, this updated release adds PS3 and Vita to the list of platforms, while doubling the bit count and bringing a bit of new content and other graphical upgrades.

Heavily inspired by early Dragon Quest/Warrior games, Dragon Fantasy Book I is a tongue-in-cheek adventure that doesn’t take itself too seriously. Gameplay is relatively simple, with random turn-based battles accompanied by the standard Attack, Magic/Skill, Item, and Run options. The game is split into three chapters, plus the Minecraft-inspired “Intermission M”, which vary greatly in length. Chapters can be tackled in any order, but it certainly makes the most sense to take them on in ascending order to see the gameplay developments and due to the way the story links together and builds from the first chapter.

The first chapter, which tells the story of retired, bald-headed hero Ogden after he is called back into service following an attack by the Dark Knight, is by far the longest and most substantial as a standalone experience. Ogden’s chapter also contains the most straightforward implementation of the battle system in the game. Battles here are simple one on one affairs and the best tactic for every battle appears to be repeated basic attacks interspersed with a healing spell every three or four turns, which can get wearisome and grating in the game’s longer sections. On the positive side though, battles move along at a good pace and players aren’t left waiting to input their next move, which is continued even when the latter chapters add to it. 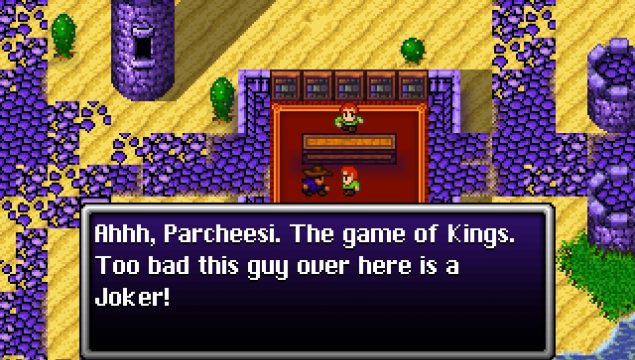 When he hits that bullseye, the rest of the dominoes will fall like a house of cards.

Things improve for Anders’ very short second chapter, which includes multiple party members, and again for Jerald’s third chapter and Intermission M, which bring in multiple enemies, but there is still a case where simple tactics are easily enough to defeat any enemy. Players will find that the game’s most enjoyable areas and dungeons are also its more compact ones; the new enemies and locations always bring freshness, but in the larger areas where progress isn’t clear things begin to get rather samey. At the time of release there were also a few technical issues with the game, including some freezing issues on the PS3 version that prevented progress towards the end, but thankfully most of the issues have been fixed with a patch, with another expected to mop up remainders in the next few days.

Any difficulty spikes can be overcome by grinding for a bit of time to improve levels, and things are helped by deployment of one of the more appreciated aspects of Dragon Quest, the lack of a game over screen. Players are instead transported to the last used church/save point with half their money intact. Players protect money in a bank should they not wish to lose it, but outside of the third chapter where earning money is the main objective, most players won’t earn enough to make this a pressing need. 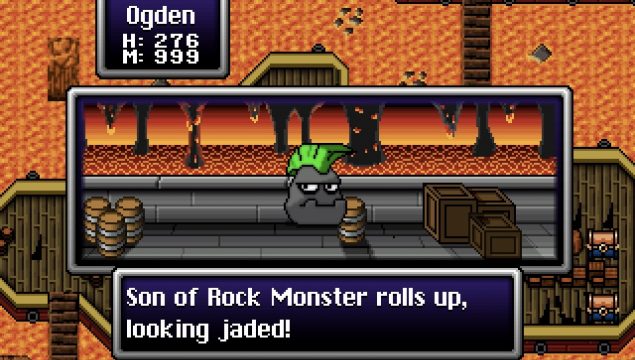 If this is too modern for you, the original 8-bit graphics mode is also included.

The story is generally straight to the point, but this mostly plays to Dragon Fantasy‘s benefit. Despite the brief story sections, there’s still a lot of charm to the world that comes through in multiple ways. The game’s NPCs add a lot of life to each town and there are a lot of other neat touches as well, such as individualised descriptions for the appearance, attacks, and defeat of each combatant and often entertaining text that pops up when certain things are examined. Conversations between characters are also generally entertaining if brief, another area which would be improved simply by being more substantial. In addition, the comparable shortness of the later chapters and the events that occur give a sense that these chapters at least are more intended as a precursor towards Dragon Fantasy Book II rather than being full experiences in their own right, a slightly jarring contrast to the experience of the first chapter.

The 16-bit sprite mode that has been added in time for the PSN release (which will also be added to the previous platforms’ versions) looks pretty good. Sprites are all distinct and easily recognisable, the enemy designs are generally very good, and each location has its own visual theme to keep things interesting. Admittedly, there’s little that actually wows or comes off as particularly impressive, but equally there are very few complaints to be had. Similar thoughts also apply for the music and sound effects. They evoke the retro sense very well, but struggle to be at all memorable.

Book II seems well on its way to continuing the development that is shown as players advance through the chapters, and there’s certainly a lot of potential waiting to be discovered. As it is now, Dragon Fantasy Book I is an enjoyable experience that will sit well with those looking for a decent throwback to earlier RPGs. There is a nagging sense of incompleteness left behind but overall more than enough interest is generated towards seeing where Book II takes things.