Dawn of a New Age

I need to preface this review by disclosing that this is only the second BioWare title I’ve ever played, the first being Mass Effect. I went into this experience without expectations and knowing little except for the unavoidable hype surrounding this game. It is just that I do not have much experience with western-developed RPGs prior to this, so I want our readers to understand where I’m coming from as I sit here with Dragon Age: Origins still in my Xbox 360, after forty hours of playtime, wanting to jump right back in and experience this fantastic game all over again.

One of the most highly touted features of Dragon Age has been player decisions that actually matter. Here is where BioWare truly delivered, as throughout the game all choices that are made have lasting effects. It is an involved process, as these choices not only shape the world setting, but have a major influence over party members. Each traveling companion has an approval rating meter that will fluctuate depending on which dialogue options are chosen, and since the band of adventurers is so diverse, it is not possible to always please everyone. Some options might even cause party members to disapprove so much that they turn on the main character and leave permanently. It is an engaging system that gives gamers an opportunity to actually role-play instead of being pushed down a set morality path. Some of these decisions are tough to make, and most are shades of gray instead of just black and white options. It is not always clear what the right thing to do is, because the consequences are often tough to live with, but it helps create a level of immersion that will have players jumping back into the game again just to see how things would differ if another path was taken.

Further complementing the role-playing aspects of Dragon Age is the player’s selection from one of six origin stories to begin the quest. Each origin starts with a unique introduction to the game’s main storyline, and players can opt to be a human of noble background, an oppressed city elf, a wild Dalish elf, a common or noble dwarf, or a mage. While the overall plot is not changed completely by the selected origin, each offers a completely different perspective while the player interacts with other characters and races throughout. After the chosen introduction is completed, players will find themselves part of the Grey Wardens, an elite group dedicated to defeating the encroaching threat of the darkspawn horde. As for the rest of the story, it is not so much that Dragon Age offers an original take on a fantasy narrative, more that the player has a big hand in how things play out. 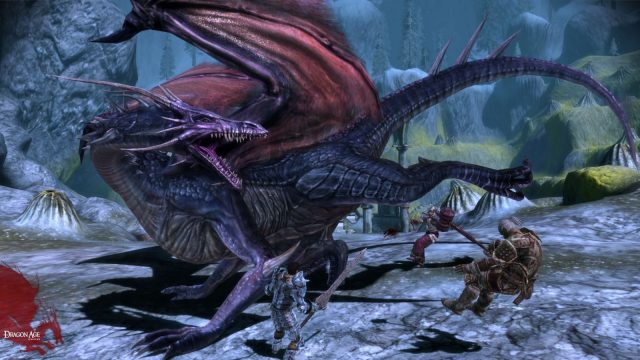 Another highlight of the game is the characters that join up during the quest. They are a unique group of individuals, each of whom has a distinct reason for joining and possesses a unique personality. These adventurers are not just along for the ride, mindlessly following the main character to help save the world. They will offer their opinions whenever a decision needs to be made and let it be known when they disagree. This helps make Dragon Age feel like a true adventure, not just a game with a single, linear path to follow where all options are merely cosmetic. Even without the unique origins, party member interaction is strong enough to warrant multiple playthroughs to observe different reactions.

However engaging the story is, an adventure would not be complete without combat, and Dragon Age has plenty. The game’s battle system takes some learning, and the game’s interface on the Xbox 360 requires adjustment, even for those not converting from the PC control setup. There are three different character classes: mage, warrior, and rogue. Each of these classes offers an option of four specializations, though only two can be selected for each character. Each class operates with its own style, and the specializations, which must be unlocked via quests, allow for a great deal of customization. As characters level, stat points need to be distributed and skills must be selected from a wide variety of options. These skills are very diverse, allowing players to design their character however they see fit and assuring that someone could play the same class twice and have a completely different build. The main character is a blank slate, though party members come set with a defined class. However, the team can be fine-tuned and customized as well.

Once players actually take to the battlefield, things can quickly become chaotic. The Xbox 360 controller is limited in how quickly it can allow actions to be performed. However, for a game designed with a PC mindset, it seems as if the developers did a decent enough job with the console setup. Player can assign skills to two sets of three buttons, but can also pause combat and go into the radial menu to choose from the complete list of commands. It is also possible to swap between characters on the fly, so players can change their point of view at any time during battle. Since it might be a little overwhelming to micromanage every skill for every character, tactical commands are also set for characters not currently under player control. The game offers configurations for different styles of actions, such as the mage having an option to heal or deal damage. These tactics might not be ideal for every situation, so players can also edit them or create new ones from scratch. This all might seem very unmanageable to start with, but as more skills, spells, and tactical options become available, the combat system grows to become much more interactive and no longer a frustration. Dragon Age never ceases to offer a challenge, even on the lowest difficulty setting, so players must make the best of the battle system or perish. 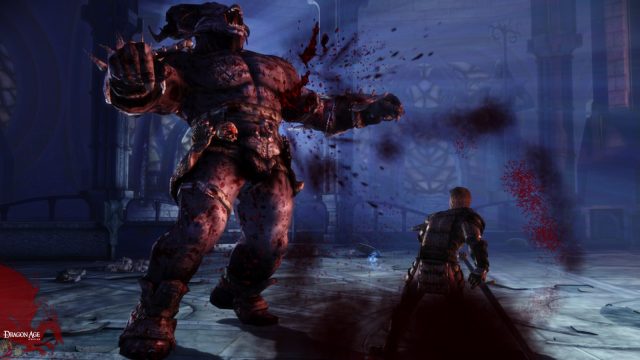 There will be war, and blood, lots of blood.

In terms of visual presentation, Dragon Age: Origins is not the most impressive game on the 360. Thankfully, the graphical limitations are not a glaring flaw, so it is not something that should deter gamers from the overall experience. Character designs are quite detailed, with each having a unique charm. The main character can be customized from the neck up, and the options are enough to give a decent amount of variety. Each area throughout the world of Ferelden offers its own stylized design, complete with differing NPCs and enemies, though the bland darkspawn horde is what players will see the most of during combat. The graphics of Dragon Age are clearly not ground-breaking, but are far from being a problem.

In a much more positive light, Dragon Age‘s audio is outstanding. From the epic background score provided by Inon Zur to the voiced dialogue, the soundtrack offers a wide variety of pieces throughout. All of these play up the epic nature of the game and highlight intense battles. Most impressive however is the voice acting. The dialogue alone is enough to have players laughing, so having these lines delivered flawlessly tops the experience off quite nicely. It is not just cutscene dialogue that is voiced either; character interaction is as well, including speech with lowly NPCs. The exchanges between party members just while wandering around towns or dungeons are so entertaining, that it is easy to stop playing just to listen to the witty banter.

Dragon Age: Origins is a complete package. It offers true role-playing, a diverse and engaging story, plentiful customization options, humorous dialogue, deep gameplay, and lots of variety. The only awkward aspect is in the control interface, but even that is completely manageable with time. This game can be challenging at times, but swapping to causal without shame saved me lots of headaches I’m sure others might experience. I began my experience with Dragon Age: Origins optimistic, but not really knowing what to expect, apprehensive that I would not enjoy it. I am leaving with a deep appreciation for what BioWare can do, and I cannot wait to see more from this world. It is hard to say if it is due to my inexperience with other games like this, but as far as a role-playing experience goes, this is as close as I’ve seen to a true one. Now if you will excuse me, I have more darkspawn to slay. A Grey Warden gets no rest.