Digimon is a popular anime series that has an extensive list of video games of diverse genres. This year, the franchise returns with an entry titled Digimon Survive, which blends visual novel storytelling with strategic combat. While this mix attempts to please fans of both genres, the visual novel section makes up the bulk of the game, so those here primarily for the combat will be a little disappointed. Digimon Survive does its best to entice players with a splendid story and charming art. The gameplay, however, is unimpressive and gets tedious after a while, including the sporadic strategic battles.

The story follows a group of students that get lost during a school trip and stuck in a parallel world. Luckily, these teenagers encounter friendly monsters who join and protect them from threatening creatures that seem to be possessed by some kind of fog. Players take on the role of Takuma, a natural leader who partners with the very charismatic Digimon Agumon. With the aid of their partner Digimon, Takuma and his allies try to survive as they look for a way out of this world. This isn’t, however, a stroll through the park as survival for some means dire consequences for friends, including heartbreaking events. In their adventure, the students meet a knowledgeable professor and two mysterious kids who take the story down dark and winding roads. Both the students and the Digimon have diversified personalities, some very likable while others work well at drawing the player’s ire. The dialogue effectively manages to portray the relationships between each monster and its human companion, which range from healthy and respectful to some toxic interactions where the companions aren’t ashamed of showing hate for the monsters beside them. The plot manages to keep things interesting during the whole adventure with its many mysteries to uncover and emotional moments.

Players’ decisions have an impact on the story, which is divided into multiple parts. There is an obvious point where the story diverges into three routes, though the available options are dependent on the Karma points players have obtained from previous choices. Moral, Harmony, and Wrathful are the three different Karma paths players can follow, which affect the evolutions of Agumon throughout the game. Choosing a route is somewhat easy since the answers for each route are always in the same place; for instance, the Moral route answers are always the ones on the left. There is also a fourth route that leads to the canonical ending, but it is only available after clearing the game once. Story presentation is an engaging affair, and playing alternate routes is tempting just to see how characters’ stories differ. Many elements such as items and recruited Digimon can be carried over to a new playthrough via New Game Plus, so the game makes it easy to restart the adventure. 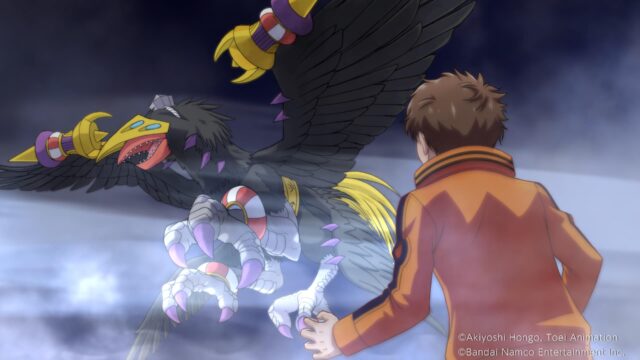 Good relationships lead to epic moments like this one.

Players interact with the game most of the time in a point-and-click approach. They see through Takuma’s eyes and move a cursor through the screen to choose who or which object to interact with. Interactable objects are exteremly easy to reach because there’s a button that takes players to the next one automatically. Sometimes there are things that cannot be seen by the naked eye, so Takuma needs to look at them through his camera, finding items or sometimes shadows that are trying to attack him. The way in which players explore the world is good, but it’s unfortunately slow and gets tedious after a while.

Besides solving the mysteries of this parallel world, Takuma has some moments of freedom to explore whatever he sees fit and chat with his allies. During these moments, players move between various locations as they search for information, with the story advancing if they interact with a specific place or person indicated with a marker. There is another feature of exploration called free action, where players ironically have a limited number of actions to spend interacting with characters before moving to the next story beat. These interactions are where players mainly strengthen their bonds or raise their Karma. Takuma can get closer to his friends by selecting the right words during these bonding events, which can lead to benefits in combat or have narrative consequences. Since players are able save their progress almost any time, it’s easy to pick an answer, and reload if it doesn’t produce the desired effect. Bonding is made more interesting by different characters needing different types of answers to raise their affinity. 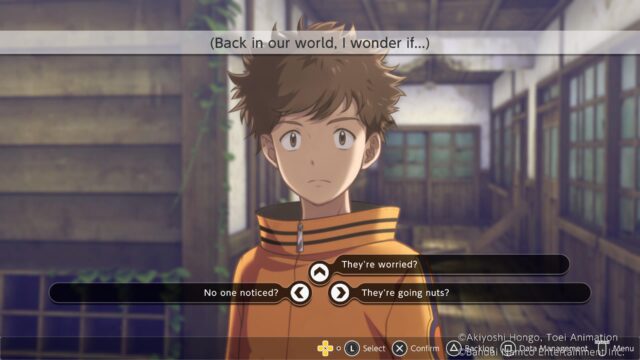 Affinity with characters increases by choosing the right answer.

Players eventually get into combat, where friendly Digimon face off against other monsters. Digimon move in a grid and have normal attacks and other more powerful abilities that cost SP. Each monster has different skills, but they don’t learn more as they level up; skills are simply replaced by more powerful ones when a Digimon evolves, which leads to battles becoming repetitive. There are some elemental weaknesses and ailments that play a role in battle, but they are never fully exploited and can be largely ignored since a strong monster can easily kill another even if it’s not targeting a weakness. Digimon linked to the humans can evolve and devolve during the battle, and they unlock evolutions during crucial moments of the story, which is fantastic in a narrative sense. Evolving drastically raises their attributes but also consumes SP at the end of the turn, and if SP runs out, they return to their original form. Recruited Digimon can be evolved outside battle using certain items but can not be devolved. The combat is fun, but it never offers a real challenge, not even with bosses. With combat being limited in each part of the story, and the student’s digimon featuring the most focus, there’s little room for other recruited monster to participate, so most of them will get inevitably relegated.

Digimon Survive offers the opportunity to have other battles outside the story ones in select spots. These combats are useful to recruit new creatures, level up, or get items. To recruite new Digimon, those linked to students need to talk with them during combat and react to what they say or do, which either fills a bar or lowers it. If players raise the bar to halfway or more, the Digimon are open to requests to join the party or hand over an item. However, the success rate of negotiation is usually very low, making the process sometimes hard and frustrating, and since most of the new creatures are going to be scarcely used in future combat, it makes the whole process feel unneccessary. Additionally, free battles get tedious since they are set in the same map for each spot and frequently have the same enemies. 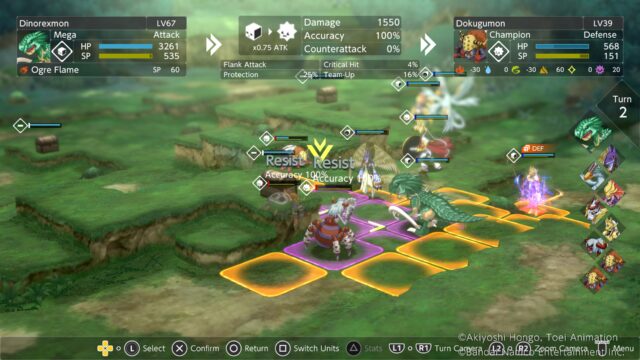 Some powerful skills allow players to attack several enemies at the same time.

The soundtrack is captivating and includes many very pleasing orchestral tracks as well as others that help set the mood in certain bits of the story. Certain tracks repeat, most notably during exploration, but they manage to remain enjoyable to listen to throughout. Sound effects and the Japanese voice acting are superb, and the game offers a wide variety of text languages. The monsters look great, and the backgrounds are excellent. The animations of the children are also very expressive. The only complaint is that the game looks a little less appealing during combat and that there are no really detailed action sequences. Despite this, the art of the game is one of its strongest features.

Digimon Survive is billed as a visual novel with strategic battles and delivers exactly what it promises. While the story is excellent and the art is pretty good, the gameplay doesn’t do justice to the game. Nevertheless, Digimon Survive is still recommended to fans of the franchise and those who enjoy a good story, with the warning that there’s scarce engagment with exploration and a repetitive battle system that tempers enjoyment.