Is This the Right Castle?

In the past several years, games like Rogue Legacy and Dead Cells have gained popularity with players and critics alike, thanks to the replayability that comes with their permadeath and level randomization mechanics. Woblyware’s Devious Dungeon 2 provides a similar experience by keeping the randomly-generated levels while nixing the permadeath element. While the game is mildly enjoyable in short bursts, it never really rises above that.

Devious Dungeon 2 starts with the player being given the option to pick between three character classes: barbarian, mage, and rogue. These classes have different perks such as the barbarian taking less damage, the mage’s ability to float mid-air for a few seconds, or the rogue being able to pull off a double jump. The player’s chosen character determines their starting stats at the beginning of the game, though the decision really just comes down to the player’s preference since the game doesn’t play that differently between the three classes. 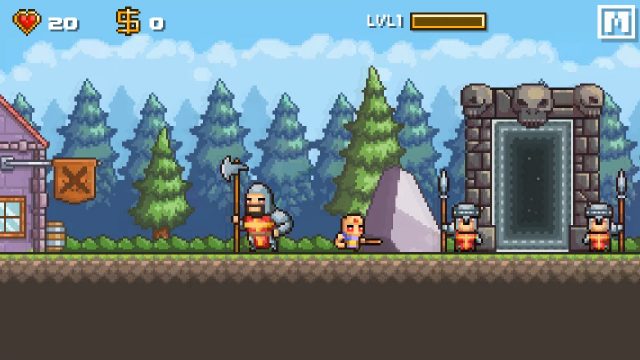 After the player has chosen a character class to play, they are shown a short infodump explaining why they are exploring a castle for treasure. However, the castle is the domain of a summoner and is filled with monsters and traps to impede the player at every turn. The story is pretty much non-existent, which isn’t a problem in and of itself, but it’s hard not to wonder if the summoner is some evil bad guy or if he just wants to be left alone. Of course, the game doesn’t explain any of that since it’s pretty much only focused on the gameplay.

To get to the summoner, the player will need to climb up the castle and go through randomly-generated levels, defeating monsters, and finding treasures. In order to progress, a portal key needs to be found that grants access to the next level. This means that levels will need to be searched thoroughly in order to find it. Due to the level randomization, the key will sometimes be found in plain sight and other times, the entirety of the level will need to be explored. There is a limited number of level layouts for the game to choose from, and this becomes obvious with some especially egregious repetition later on.

This core loop persists for the entire game and the only breaks from this repetition are for boss fights at the end of each set of levels. These bosses can seem challenging at first glance, but the strategy ultimately boils down to learning attack patterns and dealing damage during openings. The attack patterns end up being too similar between boss fights, ultimately making them feel rote and repetitive. 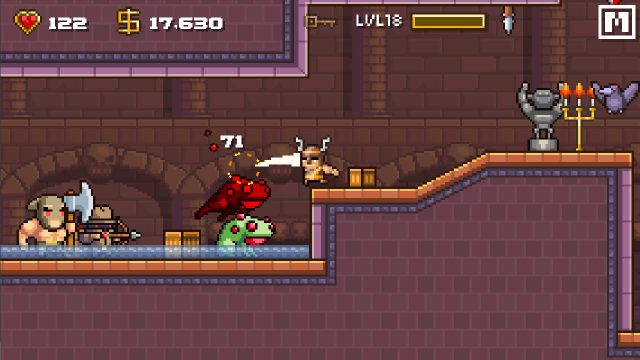 Players will need to deal with both monsters and traps if they want to survive their ascent to the top of the castle. Fighting these monsters requires paying attention to their attack patterns to avoid damage. Combat isn’t particularly complicated, with the player either pressing or holding down the action button to have their character attack while attempting to maneuver around enemies to avoid a grisly death. It gets the job done. No more, no less. The traps are also something to watch out for. Whether it’s floor spikes, falling spikes, or spiked pillars that come down, players should be prepared to deal with a lot of spikes. There are also rotating blades to watch out for later on that can cause damage even if the player isn’t necessarily touching the blade itself due to some wonky hit detection. Thankfully, dying only sends the player back to the village hub with the character level intact, rather than eliminating all progress.

Players level up by gaining experience from defeating enemies as well as from hidden tomes. Every time the player character gains a level, they’re given the option to upgrade one of three stats: damage, health, and critical. Stat boosts are also obtained by getting new weapons and armor from the shopkeeper found between levels and in the village hub. Weapons can have different effects such as giving enemies continuous poison damage or freezing them. This is helpful with the more problematic monsters. In addition, the armor upgrades give stat boosts and change the appearance of the player’s character. Potions that provide permanent upgrades can also be bought. 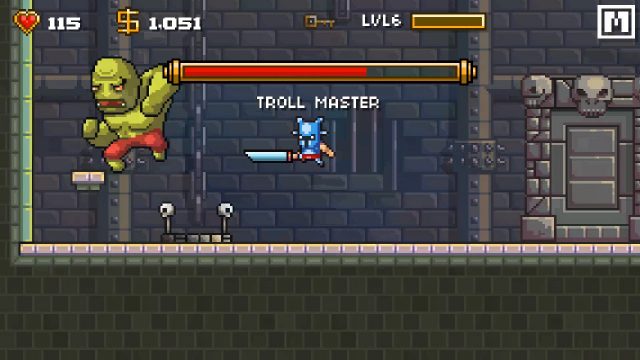 The game’s bosses are defeated by paying attention to their attack patterns.

While relatively easy on the eyes, the pixel art visuals in Devious Dungeon 2 aren’t anything to write home about. Backgrounds are a bit on the bland side and aren’t particularly memorable. On the bright side, animations from both the player’s character and the monsters are pretty fluid. The game does suffer from slowdown when the screen gets busy though it never really affects playability. The music only contains a few forgettable pieces that will be heard over and over again, though thankfully, it’s never noticeable enough to become grating. Sound effects fare better as they help add punch to the monster slaying.

Devious Dungeon 2 is a game that is enjoyable in short bursts and its lack of permadeath makes it less intimidating compared to its peers. However, the repetition makes the gameplay run out of juice after a few hours, giving little incentive to go back. At the end of the day, the game never quite reaches beyond being a mediocre time-waster.