Over the years I’ve seen my fair share of oddball crossover RPGs, though I rarely have the chance to play them. Dengeki Gakuen RPG: Cross of Venus first appeared on the radar in 2008, at the height of the DS period when anything and everything could get adapted into a game. A set of multimedia franchises from the Dengeki publishing imprint must have seemed like a good idea to someone, sometime, somewhere.

The main plot has already been blogged extensively on the forum, but here’s the basic premise. One night, the book-loving Kizuna and her best friend the protagonist (who, for the sake of discussion, shall be referred to as Sho) are investigating reports of a ghost raiding the school store. Instead of a ghost, however, they meet Shana, of the novel-manga-anime series Shakugan no Shana. She’s left the pages of her novel in order to find the one person who’s meant to traverse the boundaries of the literary worlds and restore order to those novels in danger of disruptive edits and scene subversions. This person turns out to be Sho, and the various novels are taken directly from the Dengeki imprint. Besides Shakugan no Shana, there’s Iriya no Sora UFO no Natsu, Kino’s Journey, The Secret of Haruka Nogizaka, Bokusatsu Tenshi Dokuro-chan, A Certain Magical Index, Asura Cryin’, and ToraDora, with each title providing its own heroine to add to the party. Three other novels — Spice & Wolf, Baccano!, and Inukami! — have already been devastated by the revisionist forces, but their protagonists can be recruited to provide different services at the home base.

Despite its premise, the game is strangely anti-fanfiction at heart. The many characters who come to populate Sho and Kizuna’s empty school are explicitly described as being not the real thing, but rather copies pulled from the literary ether as Sho traverses the boundaries between worlds. Everything within the book worlds is in constant need of protection against those who would seek to “improve” the narrative, including quite a few characters who are unhappy with how their personal story arcs turned out. Within the school, there is a fair amount of interaction between characters of different novels but it’s all fluff, and in any case they’ll lose their memory of the place as soon as they return home for good, so it will be like none of this extra-canonical stuff ever happened. To the probable disappointment of many fans, nobody decides to take advantage of this in any interesting way. 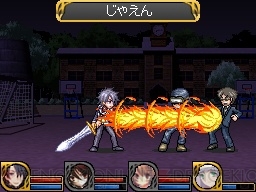 Men in Black take some flak.

Cross of Venus has some fun making light of the fact that it’s a game, such as how Sho reacts to the message window that pops up when he’s first given a sword. Such breakage of the fourth wall is unfortunately rare, but that sword sees very frequent use. This game features a battle system that is much similar to that of a sideview Tales Linear Motion Battle System, where the player-controlled character can run back and forth, dodge around enemy attacks, and attack at will. The biggest difference would be that in Cross of Venus there is only one player character on the field at a time, with no AI-controlled backups at all. The D-pad provides some responsive controls, including the up button to jump, and each party member has a different set of possible combo attacks and finishing moves. It’s also possible to chain character attacks together by pressing the X button during a finisher, swapping to the next person’s big attack and possibly the third’s as well.

There are six playable frontline characters, seven if one picks up Mikoto the Living Railgun in the post-game, and only three spots on the line-up, so some switching up will be required from time to time. The last three ladies — Index, Haruka, and Misao — fill a support role in combat through the use of Dengeki cards. These cards are how the game introduces the majority of its cameo material, i.e. plugging the entire Dengeki imprint. Base cards come in two types: those named after specific book titles, and those named after characters in those books. Combining these base cards results in ability cards that can be equipped to the support party members. Ability cards can be also be boosted by merging large numbers of surplus cards into them, raising their level and power. Some of these cards give constant, passive bonuses, while others demand energy costs and charge times in exchange for powerful spells. While each supporting lady can only equip four cards, the player can swap between them freely in combat, and in later boss battles this will be necessary to keep up with the demands for healing and cover fire. 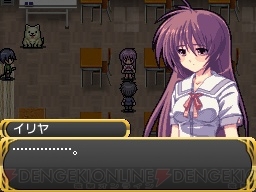 The bosses do tend to be something else, in fact, but the entire set of enemies deserves a mention. While there are some issues with variety, especially towards the beginning, and palette-swapping is more pronounced in the final stages, the combat sprites in this game are very well done. Given the broad range of genres for the selected titles — two realistic fiction, one low-impact sci-fi, five crazy combinations of sci-fi and fantasy — the enemy types must reflect this, and there is a large number of human or humanoid enemies that are as well articulated and variable as any of the party characters, if not more so. Bosses are more often than not either copies or the original version of major characters from the novels, either friends or antagonists, and they hold very true to their presentation in the original media.

While the graphics in battle are top-notch, with well-made sprites and a wide variety of backgrounds, the graphics outside of battle are a little lackluster. The actual game locales aren’t that bad, but overall there’s a flat quality to it that makes this game feel older than it really is. This is somewhat assuaged in the updated 2011 version, Cross of Venus Special, where the flat top-down view has been replaced by an isometric three-quarters view, but that’s not the version on review here.

The music department manages to provide a good performance, at least, with several engaging battle themes and plenty of tunes for specific people and places. Some of these were certainly pulled from the anime versions of the source material, as were the voice-actors who provide a lot of sound bites for major and minor scenes throughout the game. Not only do the main heroines get into the act, but almost every minor character who shows up in the school has at least a few lines voiced in some minor conversation. About the only one who doesn’t have voice-acting is the player avatar, except for bits screamed in the heat of battle. Fans of the series involved in this game would definitely be pleased, though. 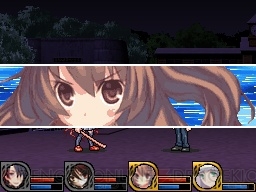 This also leads to what is probably the biggest hitch that comes with this game: the player really won’t get the most out of it if he or she isn’t familiar with at least a couple of the books-manga-anime series it draws from. There are specific puzzles and twists throughout that are much easier to figure out with a bit of background knowledge, though the game does do its best to help the player through, regardless of experience with the light novels. The player’s probable confusion is mirrored in Sho’s own reactions, because even though he’s the protagonist, he still doesn’t understand what’s going on in half the scenes he’s protecting. His possibly-girlfriend Kizuna isn’t much help either, because her usual response is “You’ll see when you get there” or “You should read it for yourself sometime.” If ever there were a sign that this game was intended to advertise the Dengeki brand, that would be it.

Really, that’s the only excuse this game has for existence: to promote the Dengeki imprint. For those who love the series featured herein, this game can be a treat, but even so some fans are sure to be turned off because their personal favorite character couldn’t be included the way they wanted him or her to be. Cross of Venus is a neat experiment, but it pulled from so many sources and then did its best to avoid major spoilers on all of them. The end result is a long list of compromises that somehow come together to make a moderately entertaining game. Perhaps the player’s biggest obstacle with this one will be their own expectations, because there’s little chance that this game will be everything they hope it will be.