Thanks to Sega of America inventing a name connection where none existed in Japan between Defenders of Oasis for the Game Gear and Beyond Oasis on the Genesis, for years many players have been convinced that the two are related. Defenders is actually nothing like Beyond Oasis and Legend of Oasis in the way it plays and in terms of its narrative. What the games do share is a look derived partly from the Arabia of centuries past, something that helps them stand out even today. Otherwise Defenders is an interesting RPG that could use a remake one day, because the constraints of its design haven’t aged very well.

After oversleeping on the day he is to meet his betrothed, the Princess Mariam, the Prince of Shanadar encounters the more pressing issue that foreign soldiers are invading. He escapes and gets tasked with the job of snatching a royal relic from the occupied palace, which turns out to be a magic lamp containing a genie. Even with the genie, stopping the incursion of invaders is beyond the Prince’s abilities at this point. It seems they may be working on behalf of an ancient evil named Ahriman, who seeks to return from banishment.

RPG narratives in 1992 were generally not complex, and Defenders of Oasis upholds that standard of the era. Giving each party member a few lines of dialogue to establish a character trait is as in-depth as the portrayals get. The localization is pretty good for the time in which it was written, and certain NPCs get just as much development as the central cast. An expansive story on a Game Gear title was unlikely to happen though, and not much time is spent on plot.

Combat takes the form of random turn-based battles that at first glance are very similar to umpteen other titles through the years. For its age and platform, Defenders of Oasis has a couple of interesting ideas to apply, principally via giving each character a unique command in battle. This results in some frustration whenever one would like to run away though, because only the Prince can do this, and he may not get to take an action until quite a bit has happened. The sheer randomness of the encounter rate can also puzzle players, because there will be times when so long has passed since a battle that it is unclear whether an area is dangerous. 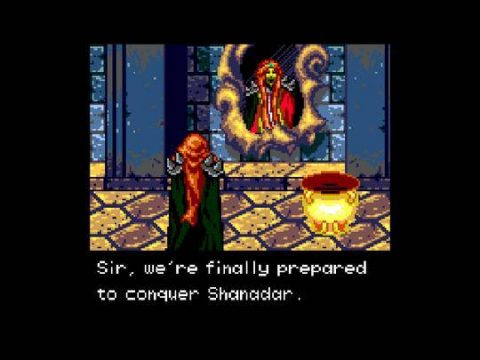 He may appear to be talking to the mirror, but there is indeed a great evil behind this emperor.

What becomes apparent after spending a little time with the combat is that turn order is rather random. Instead of having all participants take an action in one overall turn, the game individually calculates which combatant will act next. This results in the same character getting to take two or even three actions without anything else moving at all, while the inert participants get to sit there and take it. If a boss or other powerful enemy gets the advantage in this way, the result could lead to a Game Over screen before the player can respond. Once a full party has been assembled surviving mischance is much more likely, but a few opponents in the early going have instant death abilities to raise tensions. An interesting means of circumventing this comes from the game saving automatically prior to every battle — in fact, the player cannot manually record progress.

The three human characters progress in a standard fashion through gaining levels and new equipment, though they never learn any new abilities. The genie is different as experience points mean absolutely nothing to him, and because only he can use magic. Instead of increasing through levels, his statistics grow after finding or purchasing items that directly augment him, and his magical selection increases by locating signs inside of dungeons that teach different spells. Along with a plethora of random battles, dungeons also feature some interesting segments that reward attention, such as a series of minibosses that will only activate if approached from a certain direction.

It is incumbent upon the player to remember what the descriptions of spells reveal, because the game provides no reminders as to their purpose later on, particularly unfortunate when their names are not descriptive enough to provide a clue. The same is true for all items located along the way. Such an approach was hardly unique to Defenders of Oasis in the early 90s, but remains bothersome when playing it today. Having a fairly spacious inventory is quite helpful at least, particularly when numerous plot-critical items can never be removed from it.

What the heck are those flanking soldiers standing on?

There are no animations to view in battle and the player’s side is invisible, but such things were common at the time. Defenders of Oasis gets credit for using the Game Gear hardware effectively to depict its locales and rogue’s gallery. Enemies actually come in a number of interesting designs that help to bring home the distinct setting, and even considering the multitude of palette swaps these images do a good job of sticking with the player.

The single most impressive aspect of Defenders of Oasis‘s sound design stems from a few spoken words that pop up while playing. Deciphering exactly what is being said will prove rather difficult, especially when the words seem to be in Japanese, but the effort is impressive for the hardware. Musical compositions are a mix of amiably forgettable and fairly catchy, though without much that sticks in the mind after turning off the game.

Sega may have changed the title because its original Japanese name used the word Crusader, but the result has been a higher-than-necessary level of confusion amongst the niche crowd of RPGamers who actually remember it. Defenders of Oasis is a good fit for the 3DS Virtual Console, if for no other reason than to save on the Game Gear’s notorious battery appetite. I didn’t love it and numerous aspects haven’t aged well, but the experience has stayed with me instead of immediately receding into poorly-recalled impressions. Many newer games can’t manage to achieve that much.