Turn Off the Dark

On its initial reveal, Darkest Dungeon left an immediate impact, from its unique premise and its promise of true eldritch spelunking. Throughout its tenure in Early Access, it stayed in the spotlight, an infamy predicated on controversial changes made to the game’s core. Upon its final release, the game had a much more complete package to offer, but one that looked a fair bit different than what was once offered to the public. Understandably, that package lead to quite the difference of opinions regarding the game, but how does the final product actually stack up? Is this darkly-themed dungeon-crawl a demented delight? Or will its umbral corridors only descend players into madness?

As the inheritor of a decrepit mansion that has been subsumed by an old horror, the player is tasked with clearing both the mansion of its eldritch nightmare and restore honor to the family name of the one responsible for its emergence. The Ancestor, the original owner of the mansion, in a search for the ultimate pleasures, finds himself turning to the occult when earthly ones fail him. Despite resistance from the locality, the Ancestor digs deeper and deeper beneath the mansion, creating vast, winding tunnels that undercut the area around it. It isn’t until he digs too deep and unearths one too many doors that he releases the ultimate evil upon the land. Becoming the sole survivor of the incident, he writes to his next of kin that the evil must be put to rest and the family name restored. This is where the player comes into the story.

Darkest Dungeon is split into two distinct phases. Excluding a short introductory dungeon designed to teach basic game mechanics, play begins at the estate of the player, which serves as the game’s hub. Here, players will recruit traveling mercenaries, upgrade those mercenaries’ abilities and equipment, relieve them of their stress, and attempt to cure them of their psychoses. Each week, or one delve into a dungeon, the estate refreshes. While the bulk of the game is not spent here, familiarity with the estate is inevitable. It is one of the few static locations in the game and can be upgraded, though in subsequent playthroughs upgrades may not be permanent. The visual setup of the estate is memorable, a collection of ramshackle buildings ominously built below the watchful silhouette of the manor. For its job as a brief respite and as an appetizer to the game’s aesthetic, it is near perfect.

However, the meat of the game takes place in the numerous and ever-changing dungeons of the landscape. Split between six different locations, including the Darkest Dungeon itself, the majority of the player’s time will be spent wandering these murky interiors. Whether ironically or intentionally, or both, the way the player must handle the restoration of their family’s name is not too different from the way the Ancestor ruined it. Acting in a managerial role, the player puts together a party of four mercenaries to explore at a time. Before every expedition, the option is also given to purchase numerous items, which is where a lot of the upkeep for game comes from. Food is needed to keep the adventurers from starving and suffering penalties to health and sanity. Shovels are necessary to dig out obstacles that would otherwise cause the explorers to lose sanity and light. Bandages are for bleeding, potions are for blight, and other concoctions can offer stat boosts. It should be noted that as explorers increase in level, they will begin to provide some items of their own for missions they participate in. 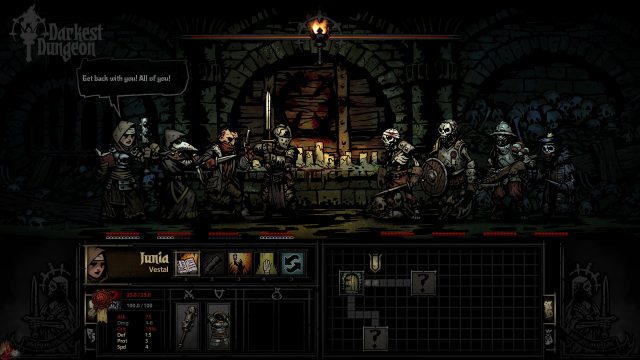 Dungeon crawling itself is a simple affair, but it may seem overwhelming at first. Once in a dungeon, a mini-map in the corner gives an indication as to which directions are available to walk to neighboring rooms. After selecting a new destination, the party will begin its march to the room, always from the left to the right. While en route, they can encounter any number of randomized occurrences, from the corpses of dead explorers to blood-soaked altars that may hide a secret. Interacting with these things is not necessary — barring a character with the compulsion to do so — and comes with a risk, but these are the main means of gaining extra from explorations, so there is little reason to not investigate unless the party is currently in ill health. Traps also litter the ground at random intervals, which can be disarmed if spotted early enough. Add in some secret rooms sprinkled in for good measure and you have an interesting enough progression through dungeons that it keeps you going to the main course of the game: the combat.

Like the dungeon-delving, the game’s combat is done in 2D, with the party on the left and the enemies on the right. This is when the fifteen available character classes come into effect. Advancing through combat is done in a standard turn-based order, where each actor in combat gets one turn, with the order based on a slightly modified speed stat. However, the combatants are lined up in single file, with their positions marking which attacks and targets they can and cannot use. For example, the Templar’s basic attack can only be used in the two most forward slots and can only reach the mirrored slots on the enemy side. By comparison, the Grave Robber can use her basic attack from all but the last slot and strike those same positions, but her attack is considerably weaker and she herself has weaker defenses. This makes not only party composition important, but the very rank and file order of characters as well. It also gives the combat an exceptionally brilliant tactical feel as enemies attack both the party’s sanity and health all while players try to mitigate the effects in order to make future dungeon delves less problematic. Where the combat really shines against the game’s bosses, of which each area has two that appear three times with increasing difficulty. The bosses challenge and push the limitations of the battle system and the interesting ways it can be used to great effect, forcing certain teams to be built to deal with each. If there is one downside to the combat, it is that as the game progresses party composition becomes far too important and using desired classes versus needed classes becomes all but impossible, but this is a small price to pay.

And that’s just a surface-level reading of the combat, as additional status ailments, trinkets, buffs, debuffs, corpses, and placement manipulation all play pivotal roles in the mid-to-late game. But this game is also extremely difficult and adventurers are going to die, though even this is handled in a unique way. When a character’s health reaches zero, they enter a state called Death’s Door. While in Death’s Door, any subsequent hit could be their last. Healing the character for any amount takes them out of this state, but otherwise every time the character takes damage their resistance to death decreases. The beefier characters tend to be quite resilient in this stage, while backrow fighters tend to be more susceptible. Given the game’s horror tones, characters can also be driven insane. A character’s sanity meter maxes at two hundred. When the sanity meter is filled halfway, the character gains a mental trait, usually negative, that can further complicate matters and help to drive the other party members mad faster. At two hundred, the character will suffer a heart attack and is put immediately at Death’s Door. Watching party members fall can be painful, but it is inevitable. Most of all, it is permanent, giving the combat an added sense of urgency. 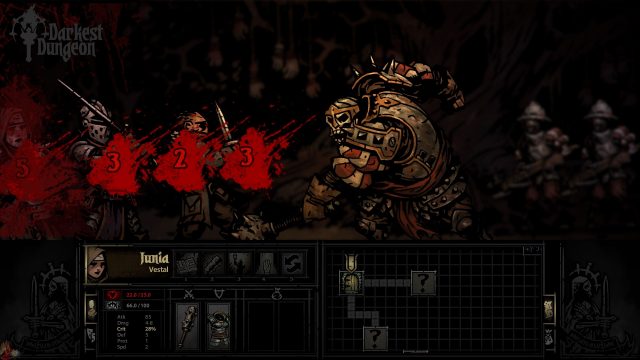 My, what a lovely sword you have.

This quick rundown of the bigger picture of the game is necessary toward understanding just how well all of it works. Though the first time settng foot in a dungeon can be confusing, by the time players first send an adventurer to seek penance at the church things will begin to click. Week after week, adventurers are sent into the dungeons. When they succeed, the spoils are used to increase their weapons, armors, and attacks. As they complete more dungeons, their capacity for dealing with the horror increases and they can go deeper in, leading to tougher enemies and greater rewards. As adventurers die, they get replaced by the fresh meat always arriving by stagecoach. Combat is simple to grasp but devilishly fun to master, with the new recruits giving room to explore different combinations of members with different loadouts for attacks. The flow of the game is immaculate, beaten only by its perfect presentation. The game oozes style without apology. The animation is reserved, but impactful. The sound design is among the best ever produced for this type of game. The omnipresent narrator adds a dark sense of humor to the game and serves only to highlight just how beautiful, oppressive, and nerve-wracking Darkest Dungeon is at its very core. Every action in this game is filled with meaningful purpose, from taking a single step to searching some scattered papers to landing the killing blow on the Old Hag before she sends another to the boiling pot once again.

Where Darkest Dungeon ultimately stumbles — and it is a mere stumble — is that it fails to stick its landing in a misguided attempt to lengthen the game. Once the Darkest Dungeon unlocks and the endgame begins, harder limitations become imposed on the player from completing said dungeon. While this works contextually, mechanically it drags the game out far longer than would be desired. It’s an unwelcome self-sabotage, turning the many meaningful actions given throughout the game into a rote grind, continually rebuilding parties to the maximum level as to adequately prepare for the trials ahead. The finale itself incredibly well done, but the journey to that summit turns the intriguing Darkest Dungeon into something duller than it deserves to be called. This still leaves a singular and entertaining experience, but one marred by a distracting element that simply lasts too long to be ignored.

Still, Darkest Dungeon is a game that absolutely deserves to be played. It is an emotional ride for the player, a fun tactical battler, and an RPG that amazingly manages to live up to its horror theme. The art direction is sublime, the sound remarkable, and the direction astounding. Worth more than its bloated weight may let on, Red Hook Studios manages to deliver a product both mentally challenging and rewarding, complete in the truest sense of the word. Just expect it to take a good long while to get there.