Dark Souls is the spiritual successor to From Software’s surprise hit, Demon’s Souls. Keeping the original game’s dark tone, difficulty, and intense combat, Dark Souls manages to create a unique experience quite unlike anything on the market, even its predecessor. Though this action RPG experience is certainly challenging, it provides an astounding number of options by which the player can persevere. Those who manage to adapt will find one of the most engrossing RPGs in recent memory.

Dark Souls places players in the role of the chosen one, an undead, player-created mute, who is tasked with saving the land of Lordran. Awakened in an undead asylum,  the player escapes and soon discovers his/her destiny to save the land. The story never really goes much beyond this, with NPCs encountered along the way providing vague hints about the history of the world. Largely the story is told through the areas the players explore, the enemies they fight,  and through the many different weapons and items they collect. For those used to heavy character interaction, it can be a bit off-putting, but it expertly creates an interesting world without getting in the way of gameplay. Still, a more in-depth history of Lordran would have been nice.

Gameplay in Dark Souls revolves around its intense battle system. Similar to its predecessor Demon’s Souls,  it features a stamina system where each action, such as blocking and attacking, uses up stamina. One can’t simply hack away at enemies with no thought to defense. This lends the combat an intense feel, requiring one to block and parry and wait for an opening. There are also ranged attacks with both spell-casting and archery providing a plethora of different options. Despite this, the game not-so-subtly suggests a balanced approach, as enemies will close distances quickly and  there often won’t be room for ranged combat. Enemies hit hard, and there is a strong focus on defense in contrast to the typical action RPG. Foes vary in size and have access to the same variety of ranged attacks, so players will have to keep on their toes. The boss fights provide a greater challenge than regular combat, but generally are not unfair so long as the play uses a sound strategy. 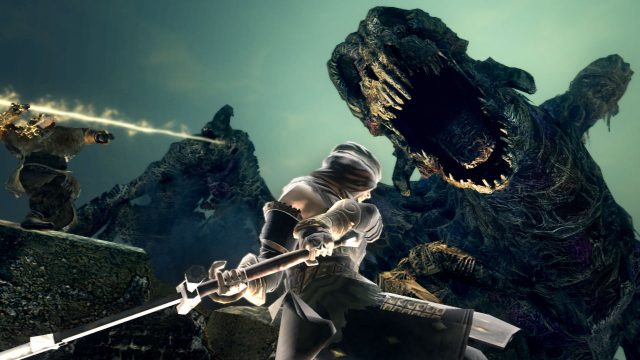 To support the player in combat, Dark Souls provides a variety of character and equipment upgrade options. Most enemies reward the player with souls, which serve as the game’s currency both with vendors and upgrading stats. Unlike many RPGs where stat upgrades will quickly show very noticeable results, in Dark Souls the benefit of these upgrades will generally be slow to show up. Stat increases allow one to wear heavier equipment, use more powerful weapons, equip more spells, etc. rather than providing tangible benefits on their own. Finding and developing more powerful weapons and armor are the primary ways by which a character is upgraded. Many powerful items are hidden throughout the world, and more can be developed by improving normal weapons with the help of the game’s blacksmiths. The sheer variety of weapon types and upgrade paths provide so many different options that it is almost overwhelming. The game even offers a robust New Game + feature where these stats carry over to be built upon to allow for even more customization.

As far as exploring the world, Dark Souls progresses in a far different way than its predecessor. Evoking classic games such as Metroid and Castlevania: Symphony of the Night, Dark Souls features a huge interconnected world with many short-cuts between the sections, and even several completely optional areas for players to discover. Though some areas are locked until about halfway through the adventure, the player is given a ton of freedom to explore the world. The sense of discovery one will find opening a new short-cut or finally reaching an area seen in the far distance is amazing. Still, at times the game can be a bit unclear about where to go next, providing only vague hints to the next destination. This can lead to a lot of needless wandering, even if said wandering could result in finding rare items and weapons.

The graphics and sound are also highlights. Though music is absent most of the time, it will play while in certain areas, and always against bosses. The music always proves to be haunting and atmospheric, and helps to lend the game a very dark feel. The various sound effects are quite effective, from shield blocks and sword strikes, to the twang of bows and roar of dragons. There are some sounds that can overstay their welcome such as the creaking of armor while moving. Overall, the sound effects more than accomplish the job of keeping the player immersed. The visuals do the same, providing a world that is both beautiful and foreboding at the same time. Animations are smooth and character and enemy designs fit in perfectly with the game world’s dark theme. There are some occasional issues with the graphics, however. Occasional frame rate drops pop up in certain areas, and clipping of characters shows up at times. Thankfully these, issues don’t usually hinder gameplay. 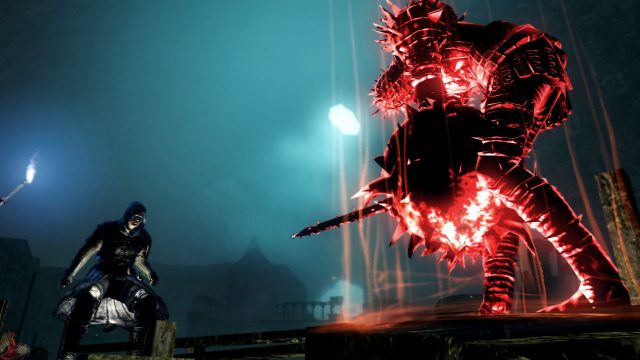 Being invaded is always a terrifying experience.

Though Dark Souls is primarily a single player affair, it does have a number of multiplayer features in the vein of Demon’s Souls. In undead form, players can be summoned into another player’s session as assistance or conversely invade another player’s session as an attacker. Dark Souls features a Humanity system, where players can restore their human form by spending a point of this currency at the game’s checkpoints. In this form, one can summon other players, but can also be invaded as well. There are even NPC helpers to summon, and NPC invaders, which is a nice touch for anyone forced to play offline. Human form is lost if the player dies, but Humanity is somewhat plentiful in Dark Souls‘ world, making multiplayer easy to access. There is no way to communicate with summoned players beyond gestures, or to easily summon friends, making playing with specific players a bit of a chore. In addition to these direct features, one will often find blood stains of dead players to see how they died, phantoms of those who are in the same areas, and messages from others scattered around the world as well. Identical to the same feature in Demon’s Souls, the majority of the messages are extremely helpful, pointing out hidden passages and rare items.

At the end of the day Dark Souls succeeds in producing a game that is both incredibly challenging and fair. Nothing it throws at the player is insurmountable, and death is not the obstacle it was in Demon’s Souls.  A new system refills health potions whenever one rests at a bonfire, and spells are now limited by their number of uses rather than a mana pool, so that death never means wasting precious regenerative items. Though the system of losing the souls one has collected upon death returns, these souls can again be retrieved by returning to the spot of death without dying. With so much to spend this currency on, it is unlikely players will travel far with a large collection of souls. Indeed, this is Dark Souls‘ triumph, challenging players to the limits of their abilities, but never doing so unfairly. With patience and exploration the game’s many challenges can be conquered by anyone, and the feeling of triumph by doing so is simply unmatched by any other RPG.