Bandai Namco has announced a special Collector’s Edition for its European release of the Dark Souls Trilogy. Available from the Bandai Namco Europe store, and viewable only in Europe (North American visitors are rerouted to the US store, which isn’t currently offering the item), the Collector’s Edition combines the remastered version of Dark Souls, as well as the complete editions of Dark Souls II and Dark Souls III, and features the following additional items:

The Collector’s Edition’s run is limited to 2,000 units, and is expected to begin shipping on May 31, 2019, with shipping extending through the month of June to accommodate the production time of the hand-painted statue. The whole set costs a total of £449.99, and is available to preorder now.

A Standard Edition of the Dark Souls Trilogy will also available to European gamers, who previously missed out on the game’s release, beginning on March 1, 2019. This version features all three games and DLC, as well as digital versions of the soundtracks. 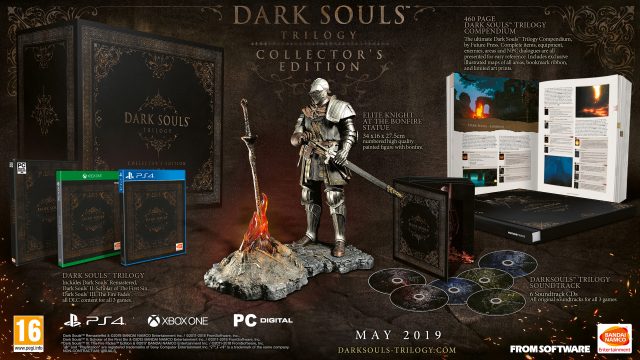