You Gotta Get a Gimmick

There are moments in life where we wonder what could have been. Cris Tales, developed by Syck and Uncorporated Games and published by Modus Games, focuses on what is, what was, and how changing both can affect what will be. The game bills itself as a love letter to JRPGs, and wears that badge with almost too much pride. Featuring turn-based combat, an innovative take on well-worn time travel tropes, and an assortment of charming characters, Cris Tales is filled with respect and reverence for the JRPGs of yesteryear. While it soars in terms of aesthetic presentation, the game’s technical performance on Switch and the inclusion of too many gameplay mechanics keep this indie title firmly rooted in the past.

The game’s opening intentionally features the familiar story beats of an ordinary main character discovering their extraordinary destiny. Cris Tales is set in the world of Crystallis, with players controlling the young orphan Crisbell. During a routine fetch quest for the Mother Superior, Crisbell meets a talking frog who awakens her powers as a budding Time Mage. From there, Crisbell recruits a handful of allies to join her in a quest to defeat the nefarious Time Empress and save the four kingdoms from a horrible future. The opening of the game plays quite literally like the beginning of a 16 or 32-bit RPG — there is even a guard named Biggs in the opening hours, referencing Final Fantasy‘s decades-long reference to Star Wars — that Cris Tales‘ main time-travel gimmick is refreshing for a while.

While other time travel stories will have players exploring the same location across different eras, Cris Tales instead has players explore the same location across the past, present, and future, all at the same time. During much of the game, the screen is split into three sections, with each one representing Crisbell’s current location, just in a different era. As Crisbell moves across the town, players watch as locations and NPCs change with time, appearing younger, older, or disappearing entirely. An empty corner in the present may contain a treasure chest in the past, or a sick young boy in the past may be missing from the present until you bring him an antidote.

The player’s choices will impact the future of any of the separate locations visited. While the game provides the player a chance to impact the result of these stories, they do not provide much impact on the greater plot. Despite the innovative use of a tripartite screen to show the same city during three distinct eras, the actual world of Crystallis feels incredibly small.  There are also very few places to go, as the game has players shuffling back and forth between locations, especially in the endgame. Moreover, the world map is sparsely populated with little by way of hidden items or locations. 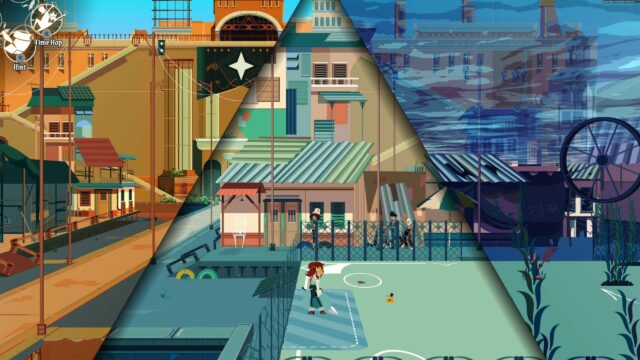 The use of Crisbell’s time-shifting abilities extends to combat as well. Cris Tales features a turn based battle system with a time-bending twist. Crisbell can use her time magic to turn enemies into younger or older versions of themselves; in one instance, a party member can plant a poisonous seed to sprout in a few turns or Crisbell can use her time magic to force the activation of the seed immediately, causing extensive damage at once. These quirks to a typical turn-based battle system are novel at first, but these additional mechanics overstay their welcome as even ordinary random battles are bogged down.

This problem comes up again through the implementation of timed button presses to cause increased or critical damage. While the timing mechanic should make the turn-based battles more engaging, in practice it feels rather hit-or-miss with poor timing detection. As the tide of battle frequently hinges on perfect timing to do critical damage, this aspect of battle quickly wears thin. Boss battles rely on the use of Crisbell’s magic, with similarly mixed results. The first boss battle is practically unwinnable unless a water spell is used on the enemy’s shield — so that when Crisbell snaps to the future, the shield has been rusted through. Like many facets of Cris Tales, the idea sounds great on paper but is not executed in a way that elevates or comments on the classic JRPG format. While the battle system is entirely serviceable, the game gets in its own way far too often. Cris Tales includes a number of interesting gameplay mechanics, but there are simply too many to gel in a cohesive manner.

Although the battle system takes a beating, Cris Tales is a sight to behold. The art direction in this game dazzles with a gorgeous, unique style that pops off the screen. The character designs are sharp and finely detailed, and it is great fun to see how different enemies and characters look in their past, present, and future versions. Each of the four kingdoms is intricately and individually detailed as well, providing a unique sense of custom and culture for each locale. The game uses color to great success, as the same location will have a completely different color palette and design in a past or future era. As players’ actions help determine the outcome of each kingdom’s respective story, the future on display will change, often providing a stark contrast in coloring. While there are only a few outcomes for each kingdom, the sense of the player’s involvement having a determination in each outcome adds a nice touch of engagement. 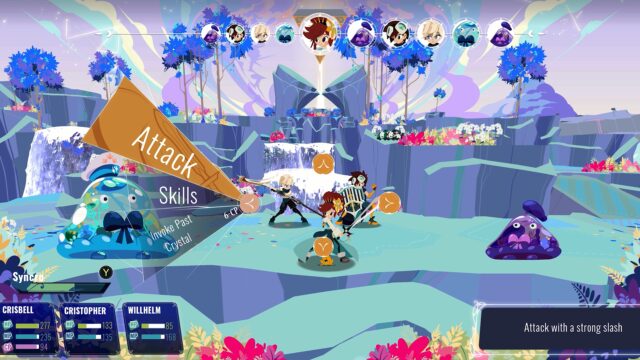 No JRPG is complete without at least one slime enemy.

The music is another highlight, with a stellar original soundtrack. Filled with pulsating battle themes and charming background music, the composition is evocative of classic JRPG tunes with a modern sound. It’s only a shame there isn’t more of it to add variety. The voice acting is pleasant and fits the visual presentation, and even the sound effects are well placed. The presentation of its audio and visuals is certainly where Cris Tales shines brightest.

It is clear the team behind Cris Tales loves RPGs, and so much of that love shines through when playing. There are a number of issues that drag the game down, however. There are marginal presentation issues, such as minor spelling or grammar issues. There are past and future versions of each enemy to encounter, but running into the same handful of enemies in each dungeon grows tiring. The characters are charming and engaging, but the story itself is unremarkable with a handful of small plot twists that are clearly telegraphed. Playing on the Nintendo Switch yields significant loading times before and after each battle or transition between screens. Reinstalling the game on a memory card rather than internal memory reduced the speed somewhat, but the load times are still long enough to be offensive.

Cris Tales is a joyous love letter to JRPGs, but limits itself to imitating the classics instead of attempting to elevate the genre. A plodding battle system ultimately causes the game to suffer. Cris Tales falls short of its lofty aims, but the zeal and indelible spirit of the game make it more than the sum of its parts.