Sam: You know what stinks? Having to do group work. You know what’s lame? When it’s with your fake-brother-from-another-mother whom you already dislike and don’t want to share the candy corn with.

Sam: Siiiiiiiiiiigh. So if you haven’t figured it out yet, Candy Corn and I are attempting to review Costume Quest 2 together, only I seem to be the one doing all the work here. Is there a magic portal where I can turn back the hands of time to get a new partner?

Adriaan: Candy Corn doesn’t… you know what? I think that’s enough of that. Double Fine might have written several dozen of these amusing epithets for their long-anticipated sequel, but we’ve got a review to write. Unfortunately, our editor-in-chief insisted we work on this together after the last — ahem — incident, so here we go again.

Sam: I want a redo of this review, right now. In any case, Costume Quest 2 begins on All Hallow’s Eve, with our heroes Wren, Reynold, Everett and Lucy getting ready for their favourite holiday. That is until a Dentist appears with the ultimate goal of ridding the world of Hallowe’en for good. How does he do this? Time travel, naturally! Creating a dystopia full of anti-costume laws, banning candy, and getting rid of all things fun.

Adriaan: Call it Hallowe’en like a normal person! And it’s not just about dentistry! The whole game is, somehow, an incredible homage to the Back to the Future films, with characters traveling to both the past and the future. It features a host of great, memorable characters who often appear in all three time periods. The story is even better than the first game’s, with lightning-fast pacing that makes a six-to-eight hour playthrough feel much, much shorter. 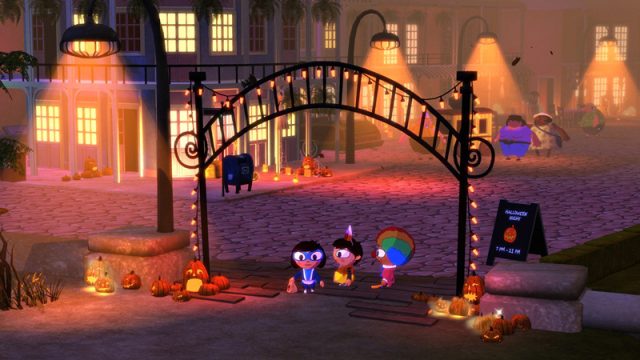 Sam: I beat the game in eight hours, but it felt like I played it for two. Maybe three. I may have to count using my fingers. I do agree with Adriaan that the storytelling in Costume Quest 2 is much stronger than it was in the previous game, with the dystopian elements woven in very tightly with the Back to the Future homage. The dialogue is a lot snappier, the characters are totes adorbs (Lucy and Everett O.T.P!) and it was easy to fall into this time slip and quest through the Dentaltopia. However, while the writing is strong, my one complaint is that aspects of the game felt too samey to its predecessor, and Lord love me the amount of fetch quests in this game made me want to stab myself with a fork. Why did I need to play hide-n-seek three times?

Adriaan: Because hide-n-seek is the greatest childhood game of all time! But you’re right, there is a lot about Costume Quest 2 that mirrors its predecessor, though I don’t think that it’s really present in the writing, but in the mechanics. In a lot of ways, Costume Quest 2 is a very safe sequel. There are a few tweaks and adjustments to certain elements — characters all wear wheelie shoes to skate around rather than having to equip the robot costume, and the battle system has seen a few minor changes — but for the most part, Costume Quest 2 is nearly identical to the original.

Sam: I’d even argue it’s too safe a sequel, because there’s no growth or innovation to make this series into something more. That being said, if you already like the previous game you played, why fix what isn’t broken? Still, I did want a bit more from the turn-based combat, and on the PlayStation 4 version, I found the button presses to be a little finicky, and some of the costumes were harder to time over others. I also admit, I wasn’t fond of the counter move because there was way too much risk in using it, and most of the time it was hard to predict time-wise when it could be used. Still, the new super moves that come with the new costumes are pretty darn fabulous, especially the Hot Dog’s DEATH FROM ABOVE BY CONDIMENTS! SUCK RELISH, GRUBBINS!

Adriaan: The turn-based combat was definitely nothing to write home about, though it has seen a slight improvement from the original. In addition to basic and charged special attacks, characters can also collect and use Creepy Treat Cards, which have various, sometimes incredibly overpowered, effects. And of course, the game features a plethora of brand new costumes to use: there’s the aforementioned hot dog, the mighty superhero, the bouncy, prat-falling clown, and of course candy corn, which does absolutely nothing but looks amazing doing it.

Sam: I hate that clown.

Adriaan: The clown looooooooves you! Every time it slips on that banana peel, it peers right into your very soul!

Sam: Reminds me of a Simpson’s quote: “Can’t sleep, clowns will eat me.”

Adriaan: That’s nonsense. The clown only eats bananas and souls. 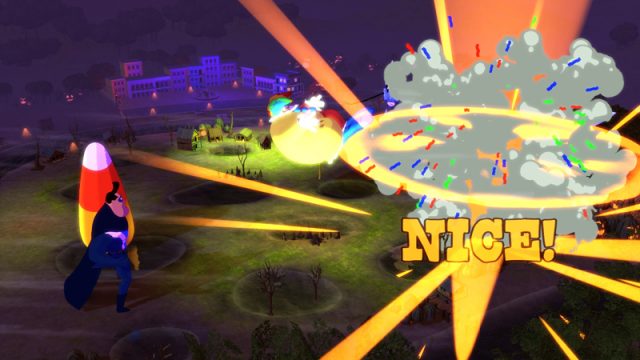 Sam: Don’t make me cue the waterworks! SIGH. In any case, the new costumes are definitely a bonus in this sequel and while the combat may be repetitive and safe, that little bit of variety gives just enough to make players want to explore what each costume is capable of. Still, playing Costume Quest 2, I almost wish there was more to equipment. The game is too simple and there isn’t enough of a challenge to keep the combat or exploration interesting.

Adriaan: Luckily, there’s more to Costume Quest 2 than just combat. Players get to go around the various neighbourhoods trick-or-treating, discovering new costumes, and using those costumes to solve puzzles. The variety of costumes and puzzles are much broader than in the first game, which makes the environments far more engaging and interesting to explore. There are more characters to interact with and more quests to complete, which just adds more charm to the already fantastic world.

Sam: I’ll agree there was a bit more depth to the puzzles this time around, but the majority of quests were fetch-based, much like the first game. While the environments are much more inviting to explore, it doesn’t make up for the fact that the majority of the quests have been recycled from the first game. Still, interacting with a lot of the characters within the environments is a ton of fun, and being able to trick-or-treat, regardless of it being recycled, is still a blast to perform. I was a Super Heroine for most of the game and it was awesomesauce.

Adriaan: Speaking of interaction, let’s not forget about Thomas Jefferson, or at least the Thomas Jefferson costume. His diplomacy ability was a stroke of genius and the source of the best side-quest moments in the game. His insanely patriotic, exploding Declaration of Independence may very well be the greatest military invention of all time.

Sam: I can concur with that! What did you think of the music and the graphics? I still think the soundtrack is pretty fun and I loved the song for the break dancing Liberty Kids! Graphically, I don’t know about you, but the PlayStation 4 version definitely had some clipping here and there.

Adriaan: I suspect the PC version was a bit more stable, but I definitely noticed the occasional shaky framerate, which is surprising given the graphical simplicity of the game. Still the characters were all fantastically designed, and the juxtaposition between the cheap, handmade costumes and their extreme battle modes was just as exquisite as the original. The game’s environments were also a cut above. Between the New Orleans-inspired Bayou of the past to the gentle suburban neighbourhood of the present to the stark, robot-plagued dystopia of the future, there was no shortage of interesting areas to explore. The music was okay, I guess.

Sam: There was music, and stuff. Does that sound about right? Whomp. Whomp. In any case, there’s a lot to like about Costume Quest 2, but it’s definitely one of the safest sequels out there. If you enjoyed the first game, the writing and environments are definitely above its predecessor, but the overall package is still very much the same game you’ve played before. That’s not necessarily a bad thing, but for me, I wish more had been done to make the game feel a lot less samey from the first one.

Adriaan: For me, this was exactly what I wanted out of a sequel. Costume Quest was never about the gameplay to me, but about the world and the charm and the idea of reliving the childhood whimsy of a beloved holiday I was too old for seventeen years ago. Safe or not, Costume Quest 2 does exactly that, and I’ll be damned if I’m going to fault them for it.

Sam: Gawd, Adriaan. I’m sorry I wanted MORE from a SEQUEL. Jeez, you’re such a conformist. “Look at me! I’m Adriaan den Ouden and I like samey games, best sequel evar. 5/5!”

Adriaan: Candy Corn is better than you. Way better.