Conception Plus: Maidens of the Twelve Stars Review

Western RPGamers were first introduced to Spike Chunsoft’s Conception series through its second title on Nintendo 3DS and PlayStation Vita. The first game on PlayStation Portable only saw release in Japan, but an anime adaptation brought along a prime opportunity to remaster the title for PlayStation 4, and this version sees the game finally reaching western shores alongside a PC release. Ultimately, Conception Plus: Maidens of the Twelve Stars shows that not too much has changed between the series’ entries; it starts with a curious premise, only to retreat from it into a predictable storyline and highly repetitive gameplay.

Players control a high school student, named Itsuki by default but always referred to as God’s Gift in the voice acting, who is called onto the school roof by his cousin and childhood friend Mahiru. Mahiru tells Itsuki that she believes she is pregnant, despite not doing anything that would cause said pregnancy. However, before Itsuki is able to respond in any meaningful way, the duo are sucked into the sky and transported to the fantasy world of Granvania. Here, the two meet a creature called Mana and the pregnancy storyline is immediately resolved as Mahiru coughs up dark energy that coalesces into a being called an Impurity. After defeating the Impurity, Itsuki is brought to the king, who reveals that Itsuki is the latest person brought from the real world to become the saviour known as God’s Gift.

God’s Gifts are usually brought to restore one of the twelve seals corresponding to the signs of the zodiac, which are keeping floods of Impurities at bay. They do this by bonding with a Star Maiden and undergoing a ritual, Classmating, to produce spiritual beings called Star Children, who then join God’s Gift in venturing into the labyrinth housing the seal, as they are the only ones able to beat down the Impurities coming from within. However, Itsuki’s arrival coincides with all twelve seals needing to be restored at once, so he must bond with all twelve Star Maidens — one of whom turns out to be Mahiru — and restore all of the seals. 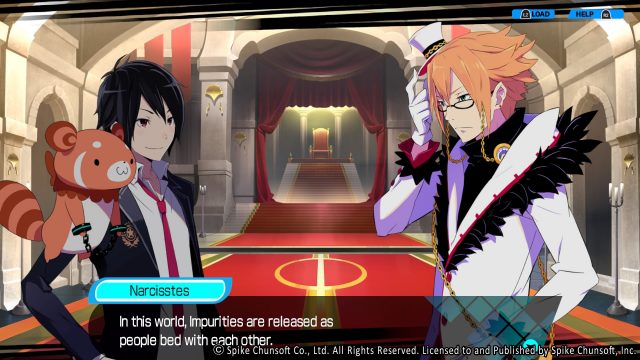 It’s a curious premise, but there ends up being very little to the overall story, and the world of Granvania is extremely underdeveloped. As Itsuki restores the seals in the twelve labyrinths, hints come up regarding a not-remotely-surprising thirteenth and final seal to deal with. Players don’t actually have to complete all twelve labyrinths to tackle the final dungeon; with each required milestone comes a series of cutscenes, though the most substantial of these relate to a side story where Itsuki and Mahiru investigate seven legends about the academy. The most interesting, if still not especially noteworthy, parts of the narrative concern each Star Maiden’s personal story, which sees them overcoming their own issues while getting closer to God’s Gift. In an addition to its original PSP release, Conception Plus also includes a thirteenth Star Maiden, Alfie, who first appeared in the animated series and acts as a trainer of the Star Children. Her story is one of the more interesting ones, but she also feels completely tacked on, and isn’t even acknowledged in any events outside of it. As one might expect for a title with dating sim elements, each heroine gets her own specific ending, with a harem ending also present for those who like to unlock everything, but there’s nothing particularly rewarding about getting them.

Conception Plus features a cycle of venturing into dungeons then returning to the capital city to bond with the Star Maidens and manage the party of Star Children. A calendar is divided into twelve four-week months, and every time players go into a dungeon the game advances a week. The time of year affects some side events and a few gameplay systems, but there isn’t anything like a time limit for progressing the game. Each week, players can choose to bond with up to five Star Maidens. During these bonding events, God’s Gift will get the opportunity to respond in one of three ways to certain prompts, which can improve or worsen the Star Maiden’s mood, though there’s no real gravitas to the decisions, as the game actively encourages save-scumming them. In addition to potentially growing the bond meter, they provide Bonding Points that are used to undergo the ritual to produce Star Children.

Though the game outright states that the Classmating ritual is different from sex, Conception Plus is more than happy to invite comparisons. No details are provided on what exactly the ritual entails, but the game shows a few seconds of a silhouetted heroine with barbie-doll anatomy in rather suggestive poses that change based on how deep the current bond is, before giving way to two hands with fingers intertwining and then rounding it off with the heroines being rather exhausted afterwards. This works fine for the more obviously mature heroines in the game, where it just about straddles the line of tastefulness, but the significant differences in maturity causes significant pause. 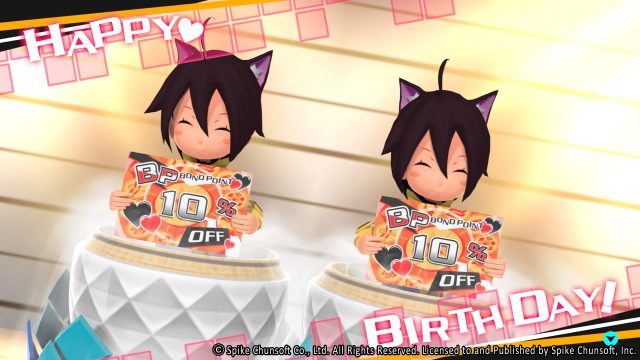 Outside of the questions concerning their production, however, Star Children are easily one of the best things about the game, with adorable designs, animations, and comments during exploration. After the ritual is performed, players are able to choose a class for the newly-produced Star Child. The classes available depend on the initial stats, which in turn depend on the Star Maiden chosen and their level of bond with God’s Gift. Later classes are significantly more powerful than those players start off with, though the second tier of classes are usually strong enough to last the rest of the game. Star Children also have a max level based on a combination of the bond level and Itsuki’s current level. This encourages players to keep producing and swapping Star Children, though there becomes a point at which Star Children will be produced without anything to do with the large majority of them.

God’s Gift is able to take three groups each containing up to four Star Children into labyrinths, which consist of randomised layouts of square rooms connected by corridors. Each of the rooms hosts a selection of enemies and treasure chests, sometimes with traps thrown in. The twelve seals form the bottom layer of four labyrinths based on the seasons. These four labyrinths are each divided into three layers of five floors, with the final layer being split into three sets of floors, one for each seal within the particular labyrinth.

Those who played Conception II will already be intimately familiar with the combat system. The turn-based battle system is partially grid-based, with enemies taking up the centre of a square and the party setting up shop around the edges of each enemy. Movement between grid spaces is a free action for the player, though enemies use up a turn should they need to move. Each of the four teams — God’s Gift and the three quartets of Star Children — act as a single entity, though all the members participate in and contribute to the action. Attacks and skills will hit one or more sides of the enemy, which have weak points so that attacks from those directions are more effective, alongside usual elemental and potential physical and magical defensive considerations. 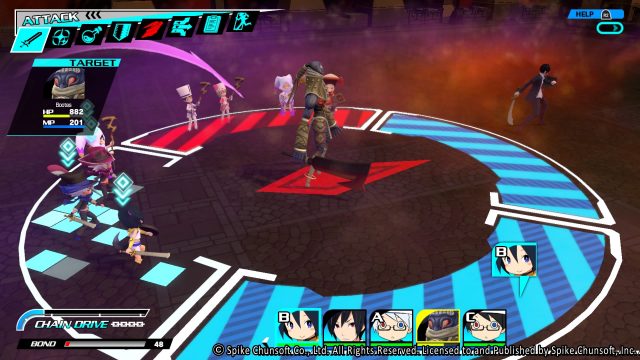 Get ready to fight this guy, and different coloured versions of him, many times.

Players will be undertaking lots of battles against the same enemies again and again, and it simply gets tiresome quickly, especially given that overcoming challenges relies on becoming stronger rather than trying to play tactically. The game’s automatic battle option becomes a lifesaver, allowing players to get through combat and dungeons at a much more pleasant pace rather than having to keep selecting the same commands again and again. There are some more advanced considerations, such as a chain gauge to unleash combos and the ability for a group of Star Children to combine to form a Mecunite, but it always seems more worthwhile to focus on simple damage dealing rather than to actively try and utilise them.

With the exception of the introductory seal and an arbitrary boost for the labyrinth of the current season, the enemy levels are consistent across labyrinths; the first layer is almost trivial, the second more challenging, and the third another major step up. The fact that each labyrinth has the same level of challenge means that there’s a major gap between completing the first and second seals, but it’s then smooth sailing until the final dungeon is unlocked. At this time, more spikes crop up, only really serving to delay the ending. Combat being so repetitive and character stats feeling like the overwhelming driver behind success means that the process simply isn’t very enjoyable. The first time players go through each layer, they will also need to face off against a boss, though they don’t offer much challenge over the regular battles that precede them. They hit a bit harder and have more HP, but these issues can be readily overcome using the liberally doled out healing items. 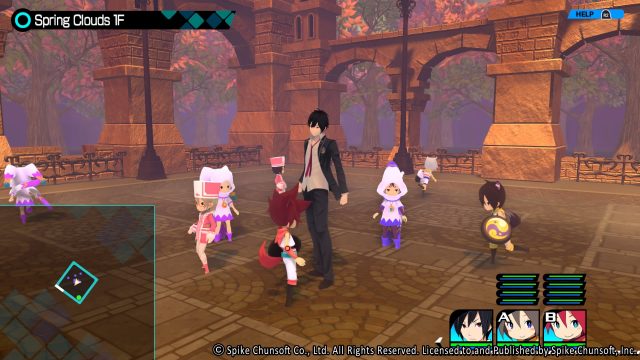 Seeing all of the Star Children running around is one of the better things about the game.

The generic layouts of labyrinth mean that exploring, while at least quick, isn’t particularly engaging. Some good effort has gone into trying to make the interior designs distinct, but it’s impossible to ignore that everything is shaped the same, on top of a small number of enemy designs that come with significant palette-swapping. Star Children look great with adorable designs, while the main character designs are a bit of a mixed bag. The music is at least solid and enjoyable to listen to, keeping things upbeat and adding a decent sense of action to the combat. Voice acting is also solid, but there’s little within the script that allows the actors to shine.

Ultimately, Conception Plus feels like its skating by on the curiousness of its premise rather than using it to build a strong experience. The Star Children are easily the most interesting thing about the game, but it gets bogged down with gameplay that doesn’t provide any reason to stick around longer than necessary. The characters are given nothing useful to do in a predictable and irreverent main plot, and though the dating sim aspects are more interesting, it’s still hard to call them any better than ok. Conception Plus works best as something to do while having something else going on at the same time, but it’s simply not strong enough to warrant full attention for long stretches of time.