A theory I happen to accede to asks, why are good things so often chosen to be remade? If they were done well the first time around, why bother trying to do it again? Remaking something with a good idea that wasn’t executed well seems to make much more sense. This idea is usually applied to the world of film, but it can fit into any other entertainment medium — which brings Car Battler Joe into the picture. Crossing Twisted Metal with Metal Max is roughly how it can be described, except the results are nothing marvelous. It’s now been more than a decade so remaking it is perfectly plausible, and just might create a worthwhile game instead of the substandard one extant.

Car Battler Joe has little to offer those seeking an involving narrative. Its mute protagonist is the son of a renowned Car Battler who is given the keys to his own rig for a sixteenth birthday present by his mother, Wanna. After the introductions are over, the protagonist takes on a variety of missions that occasionally lead to story moments but are usually self-contained and repetitive. A rival is introduced for the protagonist, as is a promptly-forgotten girl who might have been intended for a love interest. The generally sparse and aimless plot suddenly changes pace near the end, dumping far more narrative into the player’s lap than would have been expected from the vast majority of the game in an attempt to invest the proceedings with a gravity they haven’t earned. The narrative’s blithe dismissal of this world as a place where people have battled in cars for many years also defuses any interest in the surrounding geopolitical structure quite effectively.

The mission structure dictates how players will spend most of the time in Car Battler Joe, going up to a specific person found in a few towns who assigns these jobs, and then fulfilling them. Ostensibly there is a great variety, but they boil down to three types: moving between locations on a transport mission, finding something in the wilderness, or dueling an enemy. There is an occasional bit of extra text on these missions, but mostly they elapse in exactly the same way. Failure for whatever reason is met with the game offering the chance to retry as many times as necessary or quit the assignment. The only way to get an actual Game Over is to cruise between towns without an assigned task and get killed by the amazingly prolific number of cars with homicidal maniacs at the wheel, but HP restoring items are dropped often enough to make even this a very minor danger. The climax nevertheless turns it into a possibility by forcing the player to race through multiple areas with no opportunity to back up progress, thanks to a lack of any quick save option in the field.

Actually engaging in combat will likely result in bemoaning the lack of buttons on the GBA. The A button must be held down for the car to move, the B button activates special abilities, and the R button makes weapons fire. Each car available to the player has multiple weapons, but due to the GBA’s limited input capacity all of them are assigned to one input. The game automatically targets opponents and switches to different weapons as the range changes. The AI works pretty well in this regard, but having the ability to fire each one according to the player’s volition instead of as the game dictates would have been welcome. Any weapon that fires to the rear is only rendered usable by the automatic targeting, however, given that the viewpoint is so steadfastly focused to the car’s front that hitting anything manually would be a complete crapshoot. The controls mostly work adequately, but the occasions on which car steering reverses for no apparent reason are hardly helpful. The developers apparently operated on the assumption that hitting reverse with an automobile automatically makes all of its steering functions do the same, a condition that might be acceptable if it operated with any consistency whatsoever. 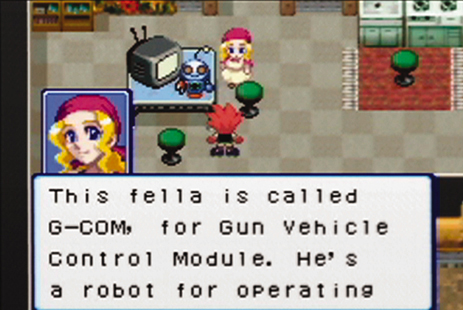 Mom, why do you stand around inside all day while somehow enlarging the garage? Also, why do you look like my sister instead of my mom?

The RPG mechanics are definitely present, though they’re no substitute for a minimum of action reflexes. Completing missions and killing enemies nets experience that translates into higher player levels, and higher levels directly translate into greater survivability against the Road Warrior refugees. Many parts must be purchased from shops and other items are found by in-depth exploration of the driving zones, making the RPG side of the game description quite accurate.

The box of Car Battler Joe advertises “over 3 million different part combinations,” which may well be true. Each car consists of three structural items along with up to four weapons, and a great number of automobiles can be obtained while playing, so simply acquiring such a mammoth inventory may well be feasible. Doing anything with the stockpile is unfortunately no occasion for joy due to a less-than-ideal garage setup. Instead of easily-understood numbers, the structural pieces have their statistics measured via a large number of bars on the right side of the screen with no text at all. Weapons come with a graphic displaying what their attacks look like but no other means of comparing their effectiveness against each other.

The inventory is a bother in general, requiring far more maintenance than would be ideal. Having a limit on regular items of ten is constraining but not necessarily wretched, though a couple of drives through missions can easily fill that if the player gets lucky with enemy drops. Car Battler Joe has an entirely different category of items called cargo, and these are incompatible with the regular variety, so they must be stored separately. The limit on these is four, and it will frequently be reached with no effort simply while fulfilling missions. Storing these materials in the player’s garage is the preferred method of dealing with overflow, as they will subsequently be required by the protagonist’s mother to improve his workshop. The baffling part of this is that mom, despite being one room adjacent to the stored materials, is unable to access them on her own. This mandates multiple trips between the garage and the rest of the house every time materials are being given to her, and this is unavoidable because raising the ability of the workshop is required to trigger plot events in the game. 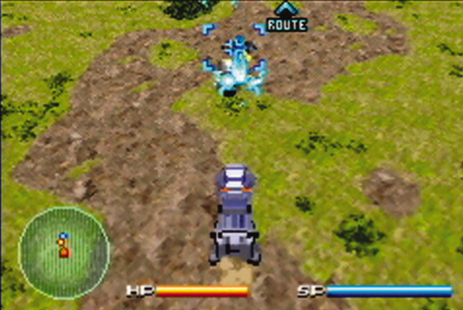 Such a lovely shade of brown ought to mean mud trouble. Fortunately, the game scores low on the realism scale.

At first glance Car Battler Joe looks like an unremarkable SNES-era RPG in its interactions with townspeople, and a grungier version of F-Zero in a desert area while driving a car. Gradually the realization will take hold that all the towns look pretty much the same, and that brown and gray are the dominant colors of the driving areas with lamentably little variance until near the end. The map which can be called into view while driving is so zoomed in that consulting it every few seconds will be required unless the player wishes to utilize a handy onscreen arrow pointing out the goal, extremely helpful when areas look so similarly bland and pixelated. The GBA was still fairly new at the time of Car Battler Joe, but these visuals do nothing to demonstrate what other developers had already showed the platform could accomplish. Audio at least is workmanlike, with some of the compositions being insidiously catchy and the sound effects doing a steady job.

Streaking straight through Car Battler Joe produces a playtime of under ten hours. Attempting to complete every possible task will increase that amount enormously, and the game seems constructed to entice such a response. Concluding the story still leaves multiple missions in the many areas newly uncovered at the climax to sample, and obtaining every possible vehicle combination demands a significant time contribution for those addicted in spite of the many ailments elsewhere.

Copies of this game are now scarce, though not incredibly valuable. It obviously was not a big seller, but the concept of an automobile-centric RPG is still a worthy one. Remakes are rife, and perhaps one day a developer stumped for a good idea will revisit this one and do it right. Until that day arrives, admiring the idea from a distance is a better plan than slogging through its execution.