Were Black Rock Shooter: The Game a summer blockbuster movie, it would’ve been a lot of fun. It’s pretty, things blow up real good, and two hours would be just right for telling its familiar story. Unfortunately for this offering from Imageepoch and NIS America, Black Rock Shooter isn’t a summer blockbuster: it’s a mission-based RPG with a moderately fun combat system. This isn’t a recipe for disaster, but a paradox: Black Rock Shooter is too short to tell the story it wants to tell, but its repetitious mechanics still overstay their welcome. Like prison food, it’s not that great and the portions are too small.

The story begins with the end of the world. Alien invaders have destroyed its cities and practically all of its inhabitants. Only a small band of pop culture-quoting military men remain. Their chances of survival are slim, but improve with the discovery of an artificial girl laden with guns and existential doubt. Black Rock Shooter, as she is called, owes a great debt to generations of sad anime girls who’ve gone before her on the Robot’s Journey. What does it mean to be human? How important is the presence of a loving creator? In a world bereft of meaning, where can an artificial being find meaning? These questions plague Black Rock Shooter while she strives to drive off the aliens and save her adopted family. 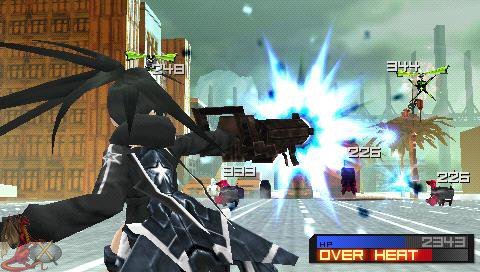 Black Rock Shooter’s internal struggle doesn’t add anything new to the discussion of gynoid killing machines. Her questions, which compose the majority of the game’s emotional core, are too similar to Xenosaga‘s KOS-MOS, Persona 3‘s Aigis, and every anime ever. While there may be new ground to cover in the field of scantily clad teens blowing things up while questioning existence, Black Rock Shooter isn’t the one to provide. Neither are her companions, who are awfully blasé about being the last men on earth. While it could be shell-shock or sheer survival of the fittest, their jokes and references to favorite movies mark strange contrast to the apocalyptic machinery they face. Is this what it means to be human? The human chatter does establish a sense of team spirit among the survivors, but it never leads anywhere satisfying. For satisfaction, one must look to the explosions.

One highbrow gaming theory claims the fun is ultimately derived from figuring out how a game’s systems work. Essentially, all games are puzzle games and solving the puzzle means bending the systems to your will. Black Rock Shooter‘s battle system supports this claim. Running into enemies on the overworld screen launches combat. Battles are real-time and require aiming with the analog stick, but also have turn-based elements. Special moves have recharge timers and standard moves, including shooting and dodging, quickly cause Black Rock Shooter to overheat. Standing still, consuming coolant, and wearing skimpier outfits helps fight the heat. Figuring out the best moves to use against each flight of opponents is an enjoyable puzzle, as is timing them to get the most bang for your bullets and dodges. However, once the puzzle is solved for each group of opponents, it’s no longer fun. The missions, which generally consist of reaching checkpoints and defeating set numbers of enemies, fail to create meaningful variety. Nevertheless, the enemies keep coming to pad the game with additional experience points and item drops.

Navigating a post-apocalyptic landscape shouldn’t be easy, but neither should it be a chore. The overworld camera isn’t fully rotatable, which adds a level of agitation to hunting for gear. Accessing the mini-map requires pulling up a separate screen, which distracts from play. The secrets hidden in each stage encourage frequent map-checks. Although most maps are essentially linear, nooks and side passages keep the terrain fresh. The ruined Earth is full of lovingly crushed buildings and stark, evocative signs of calamity. Even the barren Russian wastes have interesting set pieces to make them memorable. The strong visual aesthetic carries over into the entertainingly over-the-top design of the alien leaders and Black Rock Shooter’s weaponry. The future is a grim pile of rubble, but it looks pretty good for it. The music and Japanese voice-acting fit their situations, but aren’t memorable. 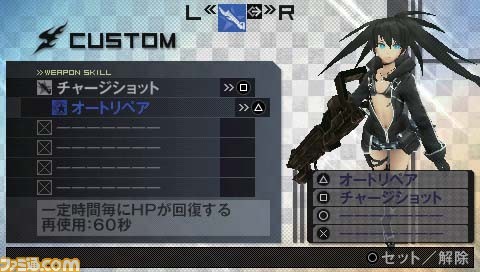 Four weapons. More than enough to kill anything that moves.

Completing the main storyline isn’t especially challenging. Plentiful healing items and Black Rock Shooter’s high HP make sheer survival simple. This dynamic prepares the game for challenge missions, both self-imposed and in the post-game content. It’s easy to be cocky with a tricked-out arsenal of death rays; it’s far more difficult to keep that smile while dodging every attack, bereft of items. The main storyline can be cleared in less than twelve hours, so gamers who appreciate post-game leveling and system-breaking are most likely to appreciate what Black Rock Shooter has to offer. The external rewards for this diligence are mixed: concept art, repeat access to earlier cinematics, and additional story scraps that scramble to cover the gaps left by the main story’s conclusion.

After the credits roll early on, unlocking the “good” ending requires completing several bonus missions. These all take place in familiar locations from the main game, against visually similar enemies. Although the repetition allows further insights into Black Rock Shooter’s development as a character, the execution feels like 100% padding. Going through familiar cut scenes a second time, with an eye out for minor changes, isn’t especially rewarding when the scenes don’t have too much to offer the first time around.

The best indicator of whether a given gamer will appreciate Black Rock Shooter is its visual style. The game offers moderately entertaining combat and sad girls in snow, but these can be obtained elsewhere at a fraction of the aggravation. At its core, the story is a familiar one that isn’t able to justify its retelling with a new twist. There is something to be said for a game that embraces zoning out and rhythmically blowing things up, but it’s not always a straight-up compliment. Look, but don’t touch