Imagine for a moment being able to soar through the sky on wings. Perhaps the wings are the typical angel’s wings, soft and white; maybe they’re more like a butterfly’s. They could even look like a peacock tail. Imagine these wings are created with the mien of your heart. Then fly through the skies of Baten Kaitos: Eternal Wings and the Lost Ocean. Though it seems like it may be, at first, the usual card-based RPG fare, Baten Kaitos stands out in a number of ways that other RPGs don’t. It’s interesting to see this game on the GameCube, where few RPGs haunt and fewer good RPGs lurk. Though the story is a bit on the weak side and it lacks much originality, it manages to have beautiful sound, impressive visuals, and a solid battle system.

Ready, Set, Deck. Baten Kaitos uses a card battle system to deal even the hardiest foes defeat. Each card (called Magnus) has a number between 1 and 9 (though ‘9’ cards are rare). If cards are played in such a way that the numbers make pairs or straights, the total effect for the cards played will be greater. So, attacking with cards that have three 2’s or 2-3-4 would both earn extra damage added on. Straights must be in order ascending or descending, and give a higher prize than pairs. Prizes are always given in percentage, and can get quite high with the better combinations. Combos also work for defending (using a helmet with 3 and a chestplace with 4 would reduce the damage), as well as healing items (playing two cheeses that are both 6’s nets an additional healing bonus). There’s one more big thing to remember during battles: each item has an element attatched to it: None, Fire and Water, Light and Dark, Wind and Chronos, with each element grouped with their opposing one. This can work both in the player’s favor and against them. Playing a Water spell and a Fire spell in the same turn will subtract the smaller from the larger and the remainder is the actual damage. So, if Mizuti casts Fire Burst for 40 and Aqua Burst for 30, it will only do 10 of Fire damage to the enemy. So, cards of elements must be played carefully. This can be a blessing in two ways. First, many enemies are weak to an element (and generally strong against the opposing element). Second, many pieces of armor have an element attatched to them which will block aditional damage of that element. Ice Armour, for example, blocks a set amount of regular damage plus fire damage, as water opposes fire. 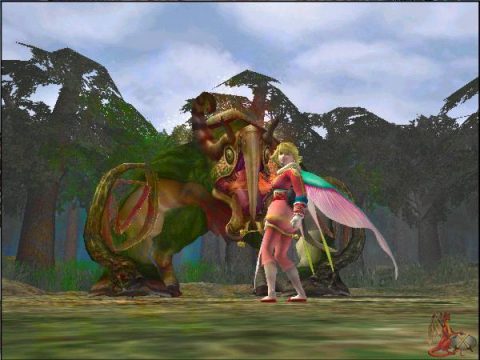 At first the maximum playable cards is three and the hand size is four, but as the characters explore the game they will find items which will increase their rank. At each rank gain a character’s max playable cards and hand will each increase by one, and the maximum size of their total deck will increase by five or ten cards. In addition, at rank 4, a timer is added to force the players to choose well and within a specific time limit, giving the game an extra edge of excitement. Levelling up is not done in the traditional fashion of when the character reaches a certain experience plateau. Instead, characters must go to a church, which they can teleport to at most save points, and pray. This is where the items which increase rank are activated, and levels gained. If a character has enough experience, they may gain several levels at one time; gaining multiple levels is quite common, as the save points are somewhat spaced out.

The one thing that Baten Kaitos shines in above anything else is its music. It’s beautifully done, far surpassing many other games, and as an added touch, the soundtrack is even included with the game. Many an RPGamer will be listening to the music long after the game has been completed. To compliment the phenomenal soundtrack is voice acting that actually won’t induce any ear bleeding. Though there is one character who is rather poorly done, the two characters heard from the most (Kalas and Xelha) were done well, with solid personality backing the voice acting. Also very nicely done is the graphics. As the game explains why humans are living up in the sky as the player goes along, it’s not surprising to see such nicely made clouds, along with other important details on enemies both monster and human alike. Additionally, there is a visual twist to the game: photos. Instead of monsters dropping money in the usual fashion, spending cash is acquired by snapping photos of the enemies the party fights using a camera Magnus. Like real pictures, these take time to develop. Undeveloped pictures sell for less but can be sold sooner. Also to take into consideration is the lighting of a particular area – fighting outside will often lead to overexposed pictures while fighting in very dark areas will create fuzzy pictures. Casting Light and Dark spells will affect how a picture turns out, so some of this can be compensated for. At the end of a battle, one Magnus can be chosen from any drops or pictures that were taken during the fight, and so the player must be judicious choosing between useable items and the valuable pictures. Thankfully, any important Magnus (mostly at the end of boss fights) is automatically picked up, so the decisions aren’t too hard.

More often than not, the type of cards acquired is random, so the game can be more difficult for some than others, but even without comboing up Magnus, most enemies can be defeated with time and patience. The game is on the easy side, with few places the player could possibly get stuck. Most should get through the game at a good pace, dusting off the final boss in about 35 hours. The game does not carry a whole lot of replay value since the story, once spoiled, doesn’t hold as much appeal, but there are two specific mini-quests which may bring an RPGamer back for another serving. The first is the collection of 50 missing Constellation Magnus which, when put together, create a Constallation Map on the church’s roof. An elderly man there will ask you to take up the task of finding them for him, and each time one is turned in he forks over a card, usually of good quality. The second task is to find the relatives of a 100-year old man. He’s had several wives over the span of his life, so his tree does branch out considerably. Like many families, not all the members get along, so a bit of coaxing may be needed to get one member or another to return home to see their family head. Both are quirky quests that require keen eyes and a good problem-solving mind. Solving both the first play through may prove to be more difficult than it seems. 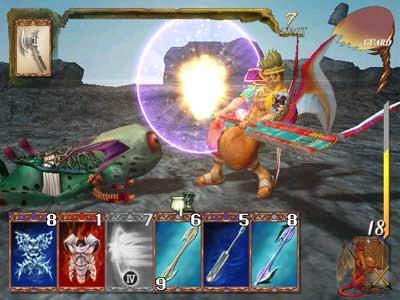 Building a Deck for Straights

Menus are an unusual setup, requiring an odd sort of combination to get around – the c-stick is used to control the character selection, while the normal d-pad is used to select the menu choice, such as using Magnus outside of battle or equipping a special Magnus accessory. Thankfully the translation didn’t go quite as oddly, including the voice acting. While it wasn’t a job that stands out in a particular way, it carries little to no flaws and helps give the game a lot of personality and sheen it would have missed without the voice acting included.

The one thing Baten Kaitos really lacks is originality, especially in the first half of the storyline. The story takes a surprising twist midway through the game, but prior to that, and near to the end again, it is rather bland and a tad on the predictable side. The music is where it shines the most in originality, but that’s really all. The battle system, while neat and apt to keep an RPGamer on their toes seeking the highest combinations, is very similar to other card-based games of non-RPG genres. The voice acting does unfortunately have one rather annoying character as well. This lack of originality does hurt the game, but thankfully doesn’t cripple it.

Despite its flaws, Baten Kaitos isn’t a bad game. It is definitely fun to play and once the initial boring story has been hurdled, and it does a much better job at keeping the player hooked to continue further. Though a second sojourn will not always be in the future, the first time playing through is definitely something to look forward to, and the challenge of building the best deck for each situation and character keeps the game entertaining. As each character plays different, there are many different ways to play the game as well. Though it doesn’t brilliantly blind with amazing light, it certainly sparkles with its own little appeal, and is worth another look for GameCube owners.