The whole “X as female characters” is a curious genre to have risen to prominence in recent years. Azur Lane: Crosswave is one such entry,  starting life as the very popular Chinese mobile title Azur Lane before Felistella and Compile Heart created this console action RPG take on the title, where real-world ships take the form of excitable maidens called Kansen and battle it out in a much more lighthearted manner than their original versions. Its novelty value holds up acceptably for the time it takes to get through the fairly brief story mode, though the lack of gameplay variation and much else to do means it’s not one to stick around long in the memory.

Azur Lane: Crosswave’s world is built very much around friendly competition rather than anything resembling serious conflict. There are some references to a pair of large conflicts in the past, though even those are treated as being much less destructive than the real-world versions. The game’s story mode stars Shimakaze and Suruga, two members of the Sakura Empire, which is hosting the Joint Military Exercise, a get-together of Kansen from the world’s four main powers — the Sakura Empire, the Royal Navy, the Iron Blood, and the Eagle Union — along with a couple of entries from elsewhere. As the exercise begins, however, the interventions of a couple of outsiders threaten to cause havoc instead.

The narrative is not deep. The lighthearted nature of the majority of the cast overpowers the game’s few attempts to instill actual drama, though this isn’t in itself a bad thing. Most events — selected from a basic map — go quickly, some being just a couple of sentences, but it does mean that players have little reason to feel invested in events. The game is quite happy to let players skip through everything if they wish, knowing that there’s no real reason to drag things on and attempting to at least provide some humour. Despite this, the cast largely succeeds at encouraging players just to come along for the ride and it’s hard to be annoyed at the game for not trying to do more. 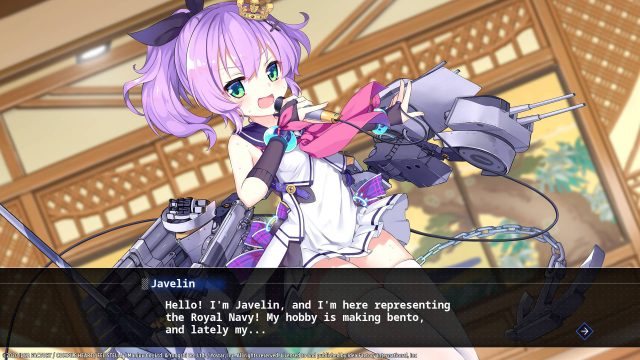 The early introductions set the stage for the seriousness of the story.

Azur Lane: Crosswave’s gameplay is made up of a series of short missions, the vast majority of which easily come in at under two minutes in length. Players control one of up to three active ships, with up to three others filling support roles and providing boosts during a mission. Control can be readily switched between each of the characters on the fly, with the AI taking over the others. These fights see players tasked with destroying ships (the big slow kind), aircraft, or other Kansen.

The controls are straightforward and work well. The four buttons fire the equipped weapons and special abilities of each Kansen, while movement is controlled with the left-stick and aiming and camera with the right-stick. A very friendly auto-aim works as long as players have the enemy within their general sight and means that combat is pretty much all about staying on the move and firing as much as possible. There are different types of Kansen — destroyers, aircraft carriers, etc. — and there’s a welcome difference between each type due to the different armaments, though the game doesn’t offer any encouragement for players to do anything other than find something that works and stick with it.

Generally the difficulty is very easy and as long as players follow the basic move-and-shoot mantra they won’t have much trouble. Challenge comes if characters become under-equipped, but collecting resources to upgrade is easily done. Experience is doled out liberally, and a recently-unlocked level 1 Kansen will catch up with the others very swiftly. The one exception to this in the story mode comes from the massive leap for the final battle in its epilogue, which clearly appears to be designed for players who have put plenty of time towards the side content to get their characters as powerful as they can. Rarely is it not immediately obvious whether a battle will end successfully or not. 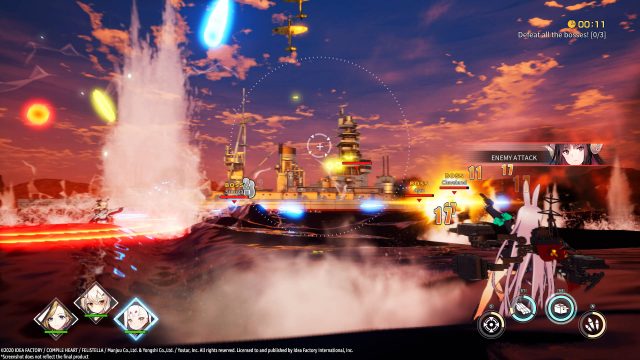 Kansen are much more manoeuvrable than their real-world counterparts.

The additional content cannot be described as particularly exciting, as it amounts to a very lengthy set of battles against a group of other Kansen, just without the brief narrative facade preceding it. Outside of this, as players unlock more Kansen by spending points earned from battles, more side episodes become available. These events are short and superfluous, but sometimes entertaining, while not adding anything to the overall story, but help provide a bit more character to the cast. There is also a photo mode, and the option to “marry” a Kansen if their relationship stat gets high enough, but there’s very limited value in keeping going once the story mode’s credits roll.

Azur Lane: Crosswave’s strongest point is its character designs. It’s fun to see how the real-life ships are incorporated and all the designs showcase each Kansen’s personality well. Elsewhere, the visual-novel event scenes simply use those designs with slight variations in facial expressions, while the 3D combat is chaotic enough to hold interest in what’s going on with the designs translating acceptably to the 3D models. Meanwhile, the audio is entirely forgettable. The game is fully voiced in Japanese and though there’s no real complaints to be had about it, it also doesn’t add anything to the experience given how little of consequence actually happens in the narrative, while the sound effects and music both feel on the weak side, adding no weight to the combat.

Azur Lane: Crosswave doesn’t harbour ambitions to be more than it really is and, though it may be a bit underwhelming, it at least doesn’t outstay its welcome. It’s perfectly happy to just provide some hours of mild entertainment without trying to reinvent the wheel and that may be enough for some, but certainly not all.