Spiderweb Software has been steadily at work for over fifteen years now, crafting multiple titles that don’t get a great deal of attention from mainstream outlets. Avernum 2: Crystal Souls is one piece of a by-now substantial series, and in many respects it resembles the late ’90s PC RPGs that were its original form’s contemporaries. That means its interface and inventory demand some work from the player, but it also means there is a great deal to see and do in its world. My time with Crystal Souls was rather enjoyable, and it has made me attentive to future Spiderweb titles.

The world of Avernum is a vast underground cave, one to which many people have been exiled from the aboveground Empire. While living underground was not necessarily the location most would have chosen, the transplanted populace was doing a decent job at it until someone assassinated the Emperor, thus ensuring retribution would swiftly come. The Empire has the slight problem of not being able to transport very many soldiers at once into Avernum, but is nevertheless doing a pretty good job of starting its conquest. Avernum 2 begins with a group of new recruits far from the battleground with the Empire, but close to several new barriers that have appeared to block transit between parts of the land. Learning who made those barriers and what needs to be done to get rid of them is the impetus for a sizable quest.

Its core tale is interesting, but Avernum 2‘s narrative succeeds best at capturing this specific location and making it come alive. Plants are rarities underground, and mushroom farming is the major agricultural food source, while protein tends to come from lizards that are herded like domestic animals. Most of the people here have adapted in some way to the unusual location, and NPC dialogue often reflects this. The writing is also consistently strong, allowing players to keep interest in the proceedings thanks to the lively prose. An enormous quantity of side missions are also available to flesh out the world further, and they do a fine job of it. A few distinct references to the first Avernum are made, but the game is in no way dependent upon familiarity with what occurred in that title to make sense for a newcomer. 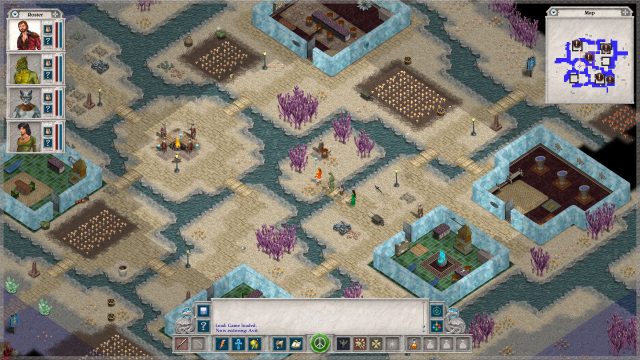 We don’t look all THAT pale for having been underground years, do we?

Avernum 2‘s interface requires work in order to investigate its world, however. Everything is mouse or keyboard-driven, and the sheer quantity of things with which interaction is possible ensures that a great deal of time has to be devoted to the task. Some of the background objects are gratifying to discover, such as switches to open hidden passages or goodies left behind by a corpse on the ground. Huge quantities of detritus must be sifted through while doing this, such as rocks or stray skulls from earlier unfortunates. Each character has thirty-five slots for items, and that number does not include what is currently equipped, but the game will still manage to fill their packs with all the sundry materials that are encountered. The gargantuan sum might not be so bad if cheap equipment from defeated enemies could stack in the menu as consumables do, but each fresh bow piece demands another slot. Selling all of it is also extremely time-consuming, plus many merchants don’t even offer to purchase things from the player, which means the ones who do will get a lot more business. It’s certainly possible to adapt, but doing so is not a source of joy.

Combat is akin to early Fallout titles in some respects, looking rather like a tactical game in which movement and attacking both take up crucial action points each turn. Spells are also akin to tactical games in their ranges, and careful placement is essential if an inconvenient ceiling support is not to block a huge area of effect. Things move quickly in battle, which is good considering the frequent number of times a few foes will appear to get in the way. The automatic positioning of characters is often rather stupid, but moving a step at a time is a good way of preserving a good location. At any time the difficulty can be turned down, which helps in cases where the opposition is a little too powerful for comfort. Fighting is mostly tolerable and sometimes entertaining, though the quantity of inconsequential encounters gets obnoxious at times. The considerable variety of techniques characters can learn as they improve helps keep things from getting too stale, and learning everything will require a Herculean effort so some planning is needed to get the abilities most desired.

Taking care of the core story in Avernum 2 is a sizable enough endeavor, but the plethora of optional missions to be undertaken can easily take the total time past sixty hours. Some of them are simple quests to deliver messages between towns, but many demand that the player investigate the huge quantity of non-mandatory locations during the game’s course. Most of these are worth looking into at least once, and few side missions are without some kind of gain. Turning them in is another matter entirely, as they always require finding a specific NPC to chat with, and doing this is a bit tiresome when only a few towns have a warp pylon for fast travel. Exploration is also required to find spells, as they are taught by NPCs instead of suddenly being learned by the protagonists. 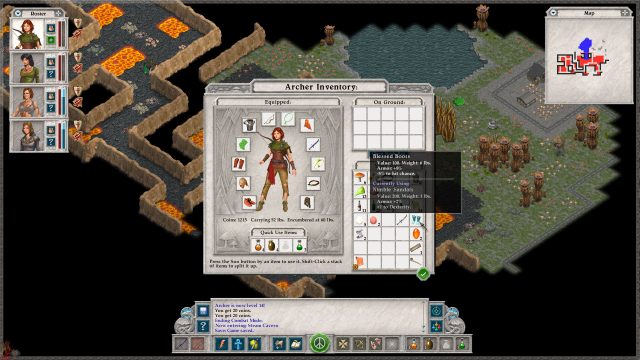 Does that seem like a lot of space? Just wait….

In some ways the visuals of Avernum 2 are understandable, since the game’s roots are in 2000. Constant reuse of assets is understandable, and enough sprites are around to keep NPCs or enemies from ever seeming too repetitive. Reading text descriptions of important NPCs that are made distinct by such traits as an unkempt wardrobe or considerable youth, however, are tougher to reconcile with sprites that look identical to numerous others in the game. The text does a fine job of bringing this world to life, but it is not matched by the visuals very often, which do not replicate the grandeur or menace of certain locations according to the descriptions.

Aside from the tune that plays while the opening title credits appear upon starting the game and two-second jingles that appear during area transitions, Avernum 2 is free of music. In the place of music, several varieties of sound effects will be heard, of which the most effective is indistinct conversation and crowd noise for towns, while the sound of creaking doors and chains rattling will be heard in almost every dungeon. None of this paltry audio is riveting enough to warrant closer attention, so investing in an alternative accompaniment is a good idea.

My time with Avernum 2 involved a lot of backtracking, and plenty of hunting around with the mouse cursor for just the right spot to produce a reaction. Yet the time was spent exploring a mammoth and intriguing world, slaughtering plenty of its nasty inhabitants, and enjoying the journey. This is not the sort of game that can easily be recommended to a mass audience, but for a certain group of players it definitely delivers an experience worth having.