Atelier Ryza: Ever Darkness and the Secret Hideout Review

You Are What You Love

Those who have been around the site have likely heard about my struggles with the Atelier series. It’s a series I have fondly played since Atelier Annie, but became less inclined to recommend when the Mysterious subseries began. I despised spin-off Nelke and the Legendary Alchemists and felt like the series perhaps wasn’t for me anymore. Then I started to hear the buzz surrounding Atelier Ryza: Ever Darkness and the Secret Hideout, and my curiosity was piqued. I told myself this would be the last straw if the series didn’t improve, but thankfully Atelier Ryza is a great example of how to reinvent a series without making it feel completely unfamiliar.

Reislin “Ryza” Stout is a farmer’s daughter with a thirst for adventure. Bored of her day-to-day routine, Ryza wishes to find a purpose for her life that extends beyond the family farm. Living on a mysterious island, Ryza dreams of exploring the mainland, and without her parents’ permission Ryza and her friends, Lent and Tao, decide to “borrow” a boat and sail off for adventure. After a run-in with a wild animal, Ryza and friends are saved by Empel and Lila, two mysterious strangers who wield the power of alchemy and have been displaced from their world. Ryza vows to learn alchemy and assist Empel and Lila in finding a way to save their world, and soon learns that her home, Kuriken Island, may also be in just as much danger. 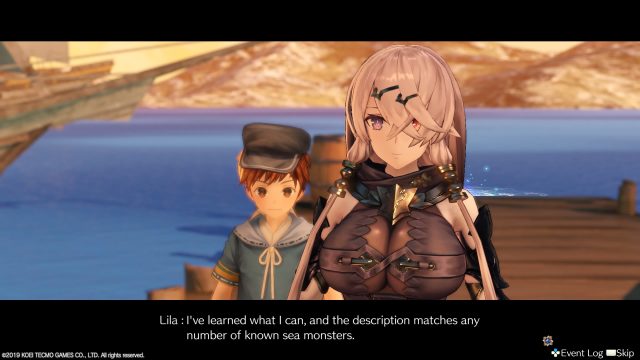 Do Lila’s boobs make sense? No they do not.

One of the elements sorely lacking in the Mysterious subseries was strong storytelling and characters. Thankfully, Ryza rises to the occasion in the narrative department, telling a convincing story about a girl yearning for adventure and her strong will to save her village from a looming darkness, even if it is a bit cliché and not always compelling. The beginning of the game drags on a bit longer than necessary in order to guide the player through the story and its mechanics, but after the six-hour mark, particularly once players have built the Secret Hideout, the story moves at a more rapid pace, with a sense of urgency feeling much greater than what the novice alchemist, Ryza, can handle.

While the cast feels a bit two-dimensional, they are a sweet bunch to root for. Ryza’s best friends Klaudia, Lent, and Tao are adventurous and kind, while Empel and Lila have a real stake in the story given the eponymous Ever Darkness that plagues their home. Ryza herself may be among the best heroines in the Atelier series. She is chock full of determination and humour; she is sensitive and has empathy, offering players a heroine who is multifaceted in a way that the previous entries lacked. Her desire to learn alchemy to help people and share kindness is commendable

Alchemy has also taken a new form in Atelier Ryza. Unlike the previous Mysterious subseries, which opted for alchemy-Tetris, Ryza focuses more on recipe transformation. As Ryza creates new items, she has the ability to transform recipes to create newer items within a synthesis loop. Parts of a recipe may require certain elements or ingredients to unlock them. What is fantastic with this new system is the amount of experimentation it offers players, bringing back the addictive quality that recent games have been lacking. Synthesizing new items from old recipes is an interesting approach to item creation, and while the system looks daunting at first, it’s surprisingly robust and intuitive, making it one of the best alchemy systems the series has had in a long time. Atelier Ryza encourages experimentation, which more games in the series should have been doing. 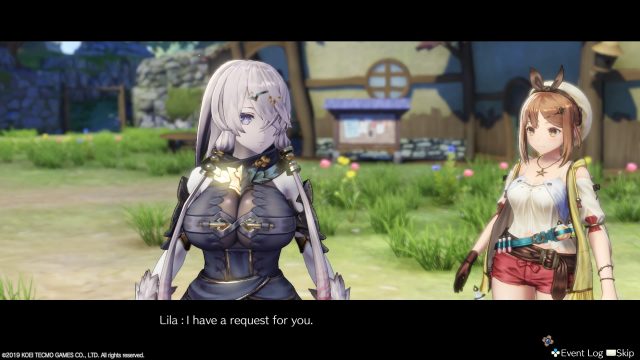 What could it be? Do I want to know?

Combat has also taken a different form in Ryza, with a battle system that feels very active. Players take on the role of one combat participant, though they can swap freely between them. Based on the turn order and depending on which character is being controlled, party members will provide “Action Orders” or shout out commands to the player. If the player grants the command, the other teammates will perform combos and additional support.

All characters share attack points (AP), which dwindle with each move use. AP is recovered through basic attacks, and more AP can be gained from Tactics Levels. Every ten AP gained can be used to power up the entire team, and give them access to strong abilities. The battle system moves quickly, and the difficulty can be adjusted based on a player’s preference. Battles are fun, but sometimes require quick judgment, and never feel completely unfair. It’s an interesting twist on previous games, and while it feels very different from previous Atelier titles, the changes are welcome for those who prefer more speed in their JRPG battles.

In terms of visuals, Ryza is pleasant to look at, though many of its areas feel uninspired or have bland colour palettes. While there is a desire for a burst of colour in the visuals, the softer colour choices suit the overall tone of the game. The soundtrack is very catchy, particularly the battle and boss themes. A lot of the music is whimsical, providing a sense of adventure for the player, and it does a great job of complementing the small changes in the graphics, such as at night when the Milky Way is visible. The Japanese voice acting is solid, with everyone cast member pulling their weight.

After the disaster that is Nelke, I wasn’t sure if I would ever get back to playing and reviewing the Atelier series. While Ryza is a shorter experience clocking in at just over thirty hours, I admit to enjoying nearly every second of my time with the game. Atelier Ryza ushers in something new while still feeling like a familiar experience. Sure, it’s not the perfect Atelier experience, but I appreciate the changes in Ryza in a way I did not with any of the Mysterious subseries or recent iterations. Ryza is easily the best heroine since Totori, and while her game has some ups and downs, I would play another game with her at the helm.