Collect the eight gems and have your wish granted. While this sort of thing has become somewhat cliché in games and anime, this common starting point can be built on to create something very interesting and unique indeed. Unfortunately, this is not the case in Atelier Iris 3: Grand Phantasm. The Atelier Iris series isn’t exactly known for its strong central plotlines, rather for its alchemy system and character interaction, but this iteration goes in a bit of different direction. What once set the series aside has been toned down a bit to make room for a generic dungeon crawler.

As with many dungeon crawlers, the players are given a number of tasks to complete, such as fetching items from the depths or defeating some monsters. Grand Phantasm mixes this with a guild system that becomes the focal point of the game. By taking on a multitude of quests and exploring dungeons, or Alterworlds, the players will rank up and unlock new dungeons or tools. From time to time, this game’s heroine, Iris, will find or devise a new alchemy recipe and will be able to create some items, though item customization has been diminished since the last game. 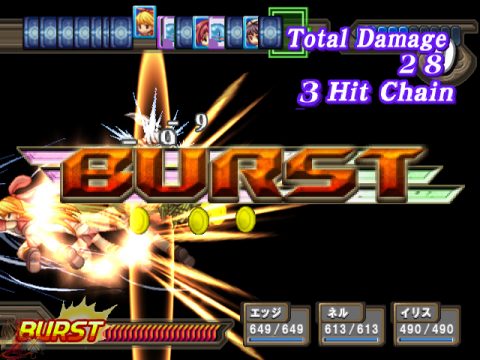 The battle system is fun, but…

This formula starts off well enough, but it quickly runs into some very serious problems. Perhaps the largest flaw is that the number of dungeons is rather low compared to the number of quests or even the number of chapters in the game. The tools attained later on can unlock a few new areas in certain dungeons, but the majority of the game’s exploration takes place in the first chapters. The remaining time will mostly be spent going through the exact same dungeons. To make things worse, advanced quests will often point the heroes to the furthest edges of a particular dungeon, or in some cases, to points in multiple dungeons. Some quests will also only give a very vague idea of where to go, so the player will need to carefully search each map in order to complete the objective. By the end of the game, players will probably have explored all of the dungeons a few dozen times each, more if they take on optional quests. It is, of course, possible to take on quests for the same dungeon in order to cut down on trips, but this too is impeded by the fact that dungeons are timed and only a few quests are available at the same time.

The moment the heroes enter a dungeon, their hourglass icons will begin ticking away. When time runs out, the party will be forcefully removed from the dungeon. They will then have to head all the way back to where they were in order to continue whatever quests they were in the middle of. On the plus side, there are some changes that occur in some dungeons after a large amount of time has passed, but these are so underused that the time system seems to mostly exist for the purpose of padding playtime. Time also passes during battle, though not in real time.

Battles are also, thankfully, far more interesting than the dungeons. They are fast-paced and designed to encourage strategy. Though there are only three playable characters this time around, all of the characters except for Iris will gain the ability to change classes, which are known as Blades. Depending on how a party is set up, the heroes will take turns using attacks or skills in order to inflict damage and build the burst gauge. Skills are very powerful, and some of them will increase the burst gauge very quickly, but they are also expensive. Since the party also shares the skill gauge, it is very difficult to abuse skills in order to win. Instead, players need to use skills wisely or else focus on filling the burst gauge, which will temporarily power up skills immensely and also fill the skill gauge completely. As an extra incentive to strategically defeat enemies as quickly and efficiently as possible, no time will pass if the enemy party is conquered quickly enough.

Though it can sometimes be difficult to defeat enemies quickly enough to not lose any time, winning is rarely a difficult task. Huge experience bonuses are given for defeating strong enemies, so it’s difficult to be underleveled unless monsters are repeatedly avoided. Taking on a few optional quests will also reward the heroes with a number of powerful items to assist them on the mandatory ones. Overall, Grand Phantasm doesn’t pose much of a challenge, but players looking for one can still test themselves by attempting to complete all battles without wasting time or by taking on some of the more difficult monster hunting missions. 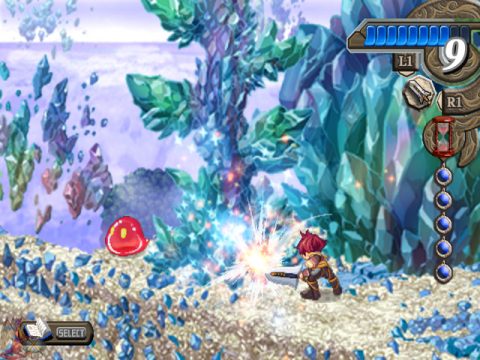 …going through each of the game’s five dungeons dozens of times isn’t.

The process of exploring Alterworlds, fighting enemies, and increasing the party’s guild rank will naturally require a number of meetings with the townsfolk that act as the clients of the guild, or at least the guild’s receptionists. While this character interaction is nice, it is too minimal to really carry the game on its own. Luckily, this is where missions come in. Each time the party ranks up, a mission will begin. These missions typically involve the heroes going through a dungeon in an attempt to locate one of the eight gems. This is also when the storyline progresses the most, though it is still a bit underdeveloped and cliché overall. The pacing is also a major issue, because the storyline progresses very little except at these points, with the normal quests filling up the majority of the game’s twenty-five to forty-five hours.

Another important thing to note is that missions force a temporary freeze on all quests, incomplete or complete, that have not been reported. If a quest’s objective is timed, it will continue to tick, even if completed, with no way to report it before the mission is done. Luckily, there aren’t many other major interface issues. In general, the interface is actually pretty good, though certain jumps can be a bit tricky due to the invisible borders. The only other real issue is that all stocked skill charges are reset after achieving burst, but that’s only inconvenient if players are attempting to save a large number of charges for a more difficult fight or attempting to meet an Alterworld bonus point condition.

Aside from the battle system, the visuals are one of Grand Phantasm‘s strong points. They may not seem particularly impressive around town or in dungeons, but the sprite artwork is especially detailed and smoothly animated in battle. Many enemies have similar design, but rather than simply palette-swap them, these similar enemies are often given other minor differences as well, such as a different head or spots instead of stripes. It isn’t much, but it’s a nice touch. Additionally, in the game’s many cutscenes, character art is very large and detailed.

The visuals may be nice, but the music is largely average. There are some good tracks mixed in there, but they are outnumbered. Unfortunately, the music is another part of the game that is hurt by the lack of exploration later on, due both to the number of times each area needs to visited and to the fact that each area’s background music remains the same throughout the entire game. Even some of the better background music can become grating after listening to it for several hours.

Many of the aspects that set Grand Phantasm‘s predecessors apart from others RPGs have been toned down or removed entirely. In their place is a dungeon crawler that is well below average. Perhaps the largest saving grace is the fast and enjoyable battle system, but it isn’t enough to fully make up for the game’s larger flaws, especially for those that can’t tolerate large amounts of repetition.