Retro games have been something of a fad in recent years, among both indie developers and industry behemoths. But while most would claim to be inspired by timeless classics like Earthbound or Chrono Trigger, Kemco’s Asdivine Hearts seems to aim for something more like Lunar: Silver Star Story. Which in this case means it’s loaded with talking cats, well-worn anime tropes, and a simple but serviceable battle system. Ported from mobile, it’s no surprise that the graphics and sound don’t live up to modern standards, but they somehow manage to fall below SNES standards too. That said, it can be fun to break the battle system, and the game’s short enough that it doesn’t outstay its welcome too much.

The setting is the world of Asdivine, a fairly peaceful fantasy land with exactly one kingdom. It was created by two gods, one representing light and the other darkness, but apparently the whole yin-yang thing wasn’t working out for them because a year before the game starts they had a spat and the goddess of light got kicked out of heaven. This imbalance in the heavens caused monsters to become more vicious, giving rise to a vague sense of uneasiness among the populace. The pompous goddess is eventually forced into the body of a cat owned by the protagonists, and together they begin a quest to save the world from the god of darkness. Despite the straightforward set-up, it takes a while for the plot to gain any sort of direction, and the party spends most of the time bouncing between towns and dungeons on fetch quests. In fact, it’s so formulaic that each town sells equipment exactly twenty points stronger than the previous town, with no exceptions. Naturally, all these shops also helpfully provide armor fitted for a cat, along with the standard array of combat fans and parasols and whatnot.

The hero of the story is Zack, a man who is never explicitly called perfect but seems to have no flaws whatsoever, and who everyone else in the party inevitably falls in love with. This includes the cat-goddess, dubbed Felix against her will. While the game lazily tries to misdirect the player into thinking the Light Deity is male, mostly by using the slightly awkward term “Light Deity” instead of anything gender specific, the world is filled with enough goddess statues that it’s not much of a twist. The other three characters in the party are all women who fall into the classic tropes, from the childhood friend who hides her embarrassment with violence, to the warrior who secretly loves cute things but thinks acknowledging this will make her seem weak. All of them will eventually have meaningful conversations with Zack where he helps them overcome their flaws. The cat-goddess shows both the arrogance of a goddess along with the silly instincts of a cat, which on reflection is exactly like a normal cat. The status screen shows all their likes, dislikes, and hobbies, which ends up being an outline of all the jokes that will be made in the game. That said, the characters aren’t completely intolerable, with the possible exception of the childhood friend, who routinely responds to compliments by whipping. The entire game revolves around these sorts of antics though, and those who aren’t amused by them will have very little reason to play this game. 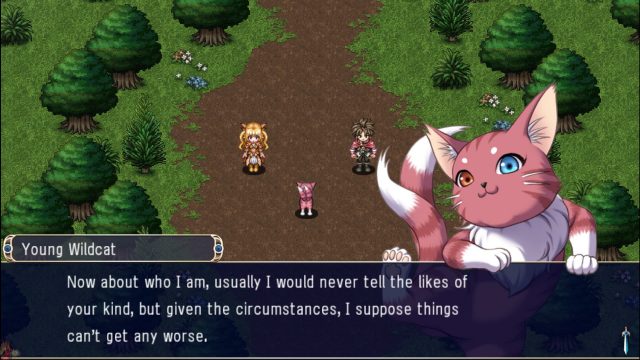 Everyone hates this cat for some reason.

Combat is the sort of turn-based affair where the speed stat will make the character’s next turn come sooner, and more powerful skills will add a longer delay. There isn’t all that much in the way of strategy: use the most expensive spells, which, thanks to the lack of detailed descriptions, the player can only assume will be stronger. The most interesting spell in the game is one that switches turns with another character; the rest are extremely straightforward. While the difficulty is adjustable at any time from the options menu, the game’s idea of a challenge is simply to give the enemies much higher stats, giving them many more actions that could each potentially kill a character. It’s even possible for certain bosses to wipe the entire party at the beginning of the battle, before the player can respond. The solution to these challenges is either to grind a lot of levels or make liberal use of stat buffs and debuffs, which can stack like in Shin Megami Tensei or Pokémon. Slowly, over the course of multiple battles, the party also builds up a super move meter, which should usually be saved for bosses. However, actually using one of these super moves often ends up trivializing the fight, especially the move that lowers all stats and causes all status ailments. These ailments include one that deals damage equal to a quarter of the target’s current health each turn, as well as Paralyze, making it both possible and recommended to nuke bosses before they can get an action. This even works on the final boss, although it requires optimized stats to actually deal sufficient damage fast enough.

Characters are customized using something called a Rubix Box, which can be best described as Materia Tetris. Each character has their own grid that holds jewels of various Tetris-like shapes that provide passive effects. Early in the game these effects are mostly limited to marginal stat increases, and by the time the player gets access to more interesting effects the stat increases have become significant enough that it’s often better to stick to those. The game has a strange fascination with jewels that give normal attacks interesting new mechanics, which is disappointing because normal attacks are so weak that there’s almost no reason to use them at any point in the game. Unfortunately, the controls for fiddling with jewels already in the box can be awkward and annoying.

The jewel box also interacts with the magic system. Each character is innately attuned to one of three elements, either Light, Dark, or Void, and will naturally level up their affinity with that element and learn new spells. However, by putting a special elemental jewel into their box, they can also learn spells of that other element, along with combination spells that require ranks of two or more elements. However, since there are only three elements, it’s not all that difficult to give every character access to most of the party’s available spells at all times. This makes it less a matter of customization and more of a persistent limitation on your Rubix Box space. 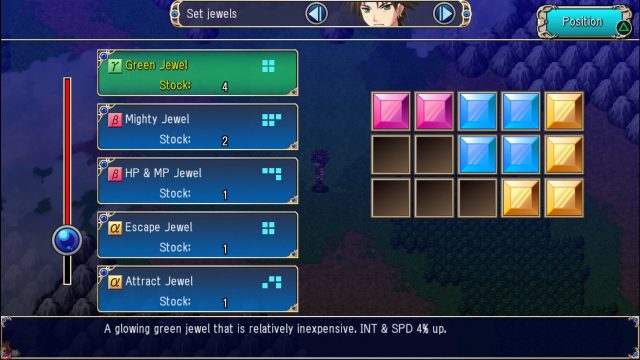 Every year I ask Santa to give me 4% more INT and SPD.

The game uses sprite-based graphics of the sort you’d expect to see from a low-budget RPGMaker game. The world map in particular is large, ugly, and empty. It doesn’t even reward exploration, as new locations don’t appear on the map until the plot demands it. Bland tilesets are reused again and again, so it can be difficult to tell towns apart from each other, and there are only about four to five types of dungeons. What few sprite animations exist are reused so heavily that there’s even a running gag made out of the fact that there’s no door-opening animation; all doors either explode off their hinges or simply vanish. The lack of animations actually makes the slapstick somewhat more awkward than it should be, as a lot of it involves people hitting the cat. Without any Loony Tunes effects to make this seem silly, the viewer is forced to imagine an adult man kicking a cat across the room, which is an unpleasant image at odds with the tone of the game. Important characters get high-resolution anime-style portraits for dialog, although there are less than a dozen such characters throughout the entire game. In battle, things are slightly better, with a few more animations per character. Enemies “breathe” via slight distortions of their relatively hi-res sprites but otherwise have no animation. Attacks sometimes use particle effects, but are generally unremarkable and perhaps a bit overlong for how often they’re repeated.

The sound direction is also generally bad. The game uses a slightly retro chip-tune style, but none of the melodies are memorable. While the music does change during cutscenes to match the mood, it often does so in an extremely abrupt way that doesn’t feel natural at all. At one point in the game there’s a section where the dungeon music keeps playing during battle, but rather than being a cool, immersive moment like it might be in other games, it only emphasizes how obnoxious that track is when looped for that long. Sound effects can also misbehave, such as when an all-targeting heal spell is cast and the game plays five separate sounds that combine into a high-pitched screech. There is no voice acting.

All that said, this is not the worst game ever. Somehow, the experience adds up to more than the sum of its parts, and it manages to be a mostly inoffensive adventure. Its predictability is a bit like comfort food, in that it recalls a childhood of being easily entertained. The battle system isn’t interesting enough to hold up the game on its own, but fiddling with stats to avoid a level grind can be rewarding in its own right. There are probably worse ways to spend a couple dozen hours, but on the other hand there are also better.