Arc the Lad: Twilight of the Spirits was an interesting and enjoyable tactical game that did some things differently, but its sequel is not so lucky. Arc the Lad: End of Darkness killed the series not necessarily because it shifted to an action-RPG format after four tactical games, but because it did a bad job with that idea. Cattle Call had no idea how to design an effective action game, and with this ill-advised title the Arc the Lad series was struck dead.

Edda is a young man with native talent for exorcism, a unique gift in the current world that prompts him to leave his isolated home for a shot at the bigger picture. Creatures called malademons, angry things that won’t stay dead no matter how hard they’re hit, are causing serious problems in the wider world, but Edda’s ability can put these things down permanently. This fact is somehow not trumpeted to the skies, and Edda goes on the path of a hunter to make the world a better place while training himself.

End of Darkness seems to have taken its structure from Arc the Lad III, as it consists of accepting missions from a hunter guild until the plot advances. Where III had a number of amusing side characters to keep things interesting when the central story wasn’t advancing, however, End of Darkness feels very slow-moving until the latter portion. Several of its early junctures are barely related to anything else in the game and manage to be unintentionally hilarious with their easily-resolved dilemmas, and Edda’s single crisis of conscience might as well not have been included when it amounts to nothing. The ending is somewhat effective, but getting there feels like a long haul in a game that can easily be finished in under fifteen hours.

Combat has diverged radically from earlier Arc the Lad games by taking the action route. Edda possesses a single physical attack that can proceed into a four hit combo, and a different kind of blow that is necessary to exorcise certain enemies but comes out slowly enough to be useless the rest of the time. Fighting a single adversary is usually a cinch due to the predictable AI letting itself be hit in a pattern, but interference by another opponent makes the control deficiencies apparent. Edda can only sidestep foes if he’s locked onto that opponent, which zooms the camera in and makes it very hard to be sure something else isn’t about to hit him in the back. Most of the time a methodical reduction of the enemies one at a time is the way to proceed, which can take a long time against adversaries that require over a dozen hits to down. 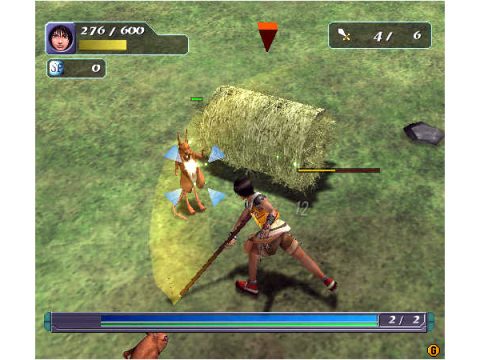 Why, of course! The hay bale was behind everything all along!

Edda’s magical abilities can be changed, but only outside of battle because Cattle Call made the asinine decision to prohibit any kind of pausing during a mission. This was probably due to the online functionality it once possessed, but keeping such a thing intact for single player sessions is unpleasant. Combat interface issues don’t stop there, for the maps supplied to guide the player around landscapes are so small that exits frequently don’t appear on them until Edda has wandered over most of the ground.

End of Darkness attempts to be a streamlined action title by dispensing with most forms of character advancement. With the exception of his magic meter increasing in length at set points along the plot, Edda can only improve himself through equipping new things, and getting most of the good stuff requires dealing with a slow synthesis system that doesn’t even record worthwhile results so the player can forgo use of a FAQ. Enemies sometimes drop things that can be sold or used as synthesis ingredients, but otherwise there is no reason to fight them except to clear a path.

Plenty of characters from past Arc the Lad games will appear in this one for use while playing, but only in the many missions that have no bearing on the story. For narrative missions there is unfortunately no option except Edda. Their innate statistics and styles of attack vary notably from Edda’s, but getting used to any of them isn’t a good idea when story missions are much longer than the others. This feature was probably intended to be an online showcase, and nowadays is a sad reminder of the earlier games in the series via explicit references. 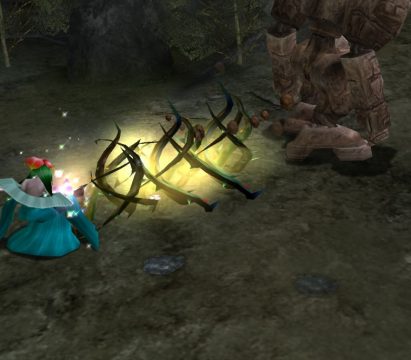 Keep your mind out of the gutter, there is nothing untoward happening here as the flower lady hits the golem from behind.

At first End of Darkness can be quite frustrating with its difficulty, since there are no items to replenish HP and enemies like to deliver cheap hits. The solution to this problem is to acquire an accessory that automatically regenerates the character, and with this in place the game becomes quite simple. The exception to this rule comes in a few plot missions where moronic companions appear and must be kept alive, but Edda himself is much less breakable.

Cattle Call took the lazy route in designing End of Darkness‘s audio and visuals, recycling huge quantities of them from Twilight of the Spirits. Town locations are barely altered, while the new environments found in this game get repetitive very quickly. There are a few pieces of new music to be heard, but most of the score is also taken from the prior game, though the composition quality is still high.

End of Darkness contains a fairly large amount of post-credits content for the curious, but I’d had enough by the time the final boss dropped dead. Sales were not stellar for this game, and so far the Arc the Lad series has been left dormant as a result of the reception it got. Remember Arc the Lad for its four earlier entries, not for this wannabe action game.