No game is a perfect simulation. Otherwise it would be a contemporary remake of Borges’ On Exactitude in Science: an awkward, oversized 1:1 model. As a result, the careful gamescrafter whittles away every element that confuses the heart of the simulation. A game that takes place in a familiar environment like the present day can’t be a perfect emulation of our world–instead, it’s a tool for allowing the player to explore the elements of the real world the designers have chosen to highlight. Vagabond Dog’s Always Sometimes Monsters highlights moral choices, but not the clear-cut, textbook decisions that have you saving a fat man on roller-skates without a second thought. Instead, it highlights sleaze, devotion, sandwiches, drudgery, toy-collecting, cash acquisition, and countless other elements that complicate the hope of a simple moral binary.

Always Sometimes Monsters is the story of a person traveling across the country to attend an ex-lover’s wedding. The journey is hindered by poverty, a series of transportation-related mishaps, and one last shot at making it big as an author. The two ex-lovers are selected early on from an ethnically diverse cast, allowing a myriad of relationship possibilities usually unseen in RPGs. The main character’s race, gender, and sexual orientation influence how certain NPCs react to them, although not to such a degree that it locks anyone into a specific, stereotyped story. The character art is diverse and generally well-formed, but doesn’t always resemble the sprites it represents. The sprites themselves are undistinguished and chubby, a choice that feels more natural in the humorous scenes than the serious ones. The chiprock soundtrack gets the job done with synths and solid percussion.

Despite the freedom allowed in character creation, certain elements of the protagonist are immutable. Dialog options, especially in key scenes connected to the central love story, are limited and constrained to a small number of outcomes. Answering these questions can reveal a tug-of-war between the player and the scripted character. Just because Zach, the player, wants a certain outcome doesn’t mean Zacho, the character, is willing to play that game. He has his own emotional hang-ups and ways of talking. Several NPCs don’t like him for actions he performed before the story began, creating an enjoyable dynamic that requires accounting for past sins while simultaneously creating them. Unfortunately, the hard-wired character Zacho is fated to become by the end fails to cleave to the game’s stated thesis of judgment-free choices. The game’s handful of endings allow multiple paths to success or failure; however, regardless of the ending there are certain fates and emotional responses that are unavoidable. 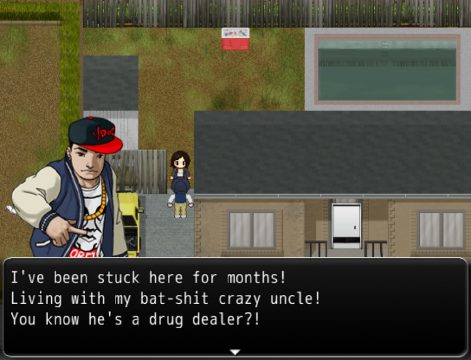 Mechanically, the game is a dialog-driven balance between stamina, money, and time, all of which are complicated by morality and unexpected consequences. The day is only so long, and each stop on the road trip is full of back alleys to explore and mini-games to challenge. Who are you willing to befriend if it’ll shave a day off your travel time? Is it OK to steal from someone if they wouldn’t notice? What if the alternative is starving to death? Is it better to work safe, stable jobs that take extra time, or risk getting your hands dirty if it means getting to the church on time? The clock is always ticking — and that last-ditch publishing contract is always hanging around rattling its chains. Of course, it’s valid to decide the dumb book doesn’t matter. There’s always a lucrative career available in election fraud.

Not all of Always Sometimes Monsters‘ concessions to reality are welcome. Some paths have more story and moving parts than others. Despite the seeming lack of moral judgment assigned to each choice, a system of slaps and bennies evolves as the game progresses. Choosing to get mixed up in the lives of others provides more gameplay than skulking around the edges of society or choosing the safe path. Getting a steady job at the tofu factory or the medical marijuana co-op makes a lot of money, but the related minigames aren’t a lot of fun. Moreover, important choices encourage paranoia. Enough NPCs are looking out for numero uno that it’s worth interrogating the motivations of everyone — old lady, lovable hobo, or childhood friend. Despite the trappings of everyday life, the drama in Always Sometimes Monsters is dialed to the max. It’s nice to see the explosive reactions unchained from a good-evil binary, but whether a gradient of cynicism is better is up to the player.

This isn’t to say Always Sometimes Monsters doesn’t have feel-good scenes or quiet moments, but they are the minority. The moral choices go far beyond the boring dichotomies of other games, where encountering a troubled orphanage means the opportunity to become either a haloed philanthropist or a purveyor of orphan-skin slacks. It takes a devious scenario to make blackmailing a doctor or cutting someone’s brakes tempting, and Always Sometimes Monsters has those. Unfortunately, this freedom can also lead to the point where the choices suddenly narrow until they don’t make sense narratively or in-fiction. Zacho knows how to have fun, but a brief bachelor party that turns into a 12-day orgy of drunken amnesia comes as an unwelcome surprise. The bite of the rails is all the more harsh when they plow through what looks like a sandbox. 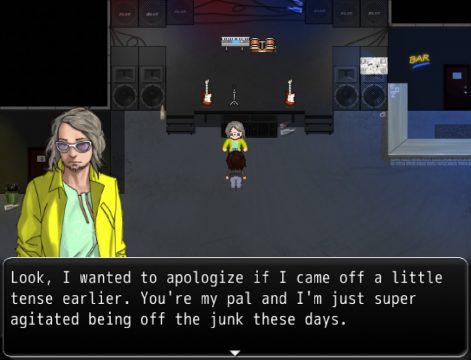 How important is friendship?

The map of morality becomes further muddled when its modelled reality falls short. The two primary creators insert themselves as NPCs, offering what feels like directors’ commentary. Early on, they explain how the lack of a tutorial makes the game more real. Reality doesn’t have a tutorial, so why should their game, which echoes reality? It’s a question worth pondering, but ultimately a dodge that obscures the limitations of each scenario. For example, not every background element is usable in the way that it should be, and most inventory items are deadweight except in the scenario they were designed to be used.

The creators’ meta-commentary extends to the worry they’re making the game too much of an in-joke. They ultimately decide, “we gotta make ourselves laugh first.” In other words, the game has a well-defined sense of self. The blend of fart jokes, pop culture parodies, and contemporary issues such as gentrification and political corruption make the game feel like a unique personal project. Its warts also show its humanity, as distracting as they can be. Frequent typos include mistakes in names, genders, capitalization, and on one occasion, a reward amount changing between dialog boxes. Worse, some choices are improperly scripted. After a fumbled drug deal, I had the dealer’s respect and the drugs I was supposed to deliver. Other polish issues crop up from time to time, including getting trapped in the corner by NPCs and text scrolling outside its box.

Always Sometimes Monsters falls short of its potential. The developers have already released one set of bug and typo fixes, so hopefully some issues will improve over time. The branching paths suggest the game was intended to be played multiple times, but the limited endings and mostly localized consequences limit the possibilities. Nevertheless, the choices are a quick burst of novel experiences. The individual scenarios are interesting, but don’t ultimately gel into a compelling story. Fans of tough moral decisions are encouraged to pay attention to how Always Sometimes Monsters complicates seemingly simple decisions. The twist of the knife isn’t always welcome or the most narratively satisfying outcome, but it’s apt to carve out some food for thought.