Akihabara: the shopping neighbourhood in Tokyo, Japan, that has turned into the Mecca for all nerd kind. Anime, games, music, idols, maids, if there’s a fandom for it, you’ll find it in Akiba. Akiba’s Beat is a celebration of all things Akiba, a place where any RPGamer would feel right at home. With a great cast of characters and a surprisingly engaging story, Akiba’s Beat has a lot going for it, but a slew of design flaws hold it back.

Akiba’s Beat begins on a Sunday “morning” in the small apartment of Asahi, a 19-year-old NEET (Not in Employment, Education, or Training) living in Akihabara. On his way to meet his far more responsible friend Mizuki, he encounters a girl named Saki who enlists his help in putting a stop to a “delusion” that is encroaching on the real world. After taking care of the delusion and totally bailing on his friend, Asahi returns home, only to discover that the Sunday that just ended has begun yet again, creating a Groundhog Day-style time loop from which he must figure out a way to escape.

Thanks to a terrific localization and a great cast of characters, the story of Akiba’s Beat really shines, and is far and away the highlight of the game. Although it meanders a bit at times, it also has a number of great twists, and a slew of awesome geek-culture parodies. The characters are the real highlight, however, with distinct personalities and their own personal brand of geekiness. Whether it be Asahi’s laid back NEET lifestyle, Yamato trying way too hard to look cool, or Kotomi needling everyone with her prickly demeanor, all the characters play off each other wonderfully, leading to a number of standout moments and memorable quips.

Unfortunately, the rest of the game has a huge number of problems. Let’s start with the battle system. Fans of the Tales series will be immediately familiar with it, as it’s lifted almost entirely from it. Characters move towards or away from enemies in a straight line, and can use special skills by pressing a button in conjunction with a direction on the left analog stick. Sadly, this system hasn’t benefited from the past ten years of Tales Studio’s iterative improvements. The system in Akiba’s Beat is clunky and stiff, and most closely resembles 2007’s Tales of the Abyss. It’s not terrible by any means, but it’s definitely far from what one would expect in 2017. 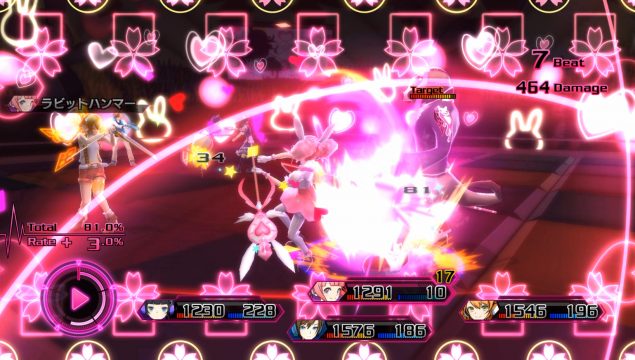 The combat does have one unique aspect to it in the form of the Imagine Drive. Each character can equip a variety of pop songs, and once a gauge is filled, the battle music changes to the equipped song. So long as it continues and characters build up combos, damage starts to rise, reaching a peak at the song’s chorus. While this creates a great stylistic effect, the game unfortunately relies far too heavily on it during boss fights. Enemies have a ton of HP, and it’s very difficult to deal significant amounts of damage without activating the Imagine Drive.

The problems continue outside of battle. The level designs are uninteresting and often too long for their own good, and players will have to traverse each of them several times over the course of the story. That said, each dungeon has a terrifically inspired visual motif, so while they might be boring to explore, they are at least fun to look at. However, it gets old after retreading the same dungeons three or for times over, which Akiba’s Beat will have you do constantly, both for the main story and for side quests. In fact, in order to get the game’s true ending, players will have to go through five particular dungeons twice in the last chapter alone. The needless repetition is far and away the biggest issue plaguing Akiba’s Beat.

Character customization is much more interesting. Each character has three sets of gear they can equip. The first is PP parts, which affect their weapons. PP parts include CPUs, hard drives, graphics cards, and RAM, each of which affects the weapon and Imagine Drive in different ways. They can also equip armor and accessories in the typical JRPG fashion. Finally, each character can equip two trading cards, which offer up a variety of bonuses. 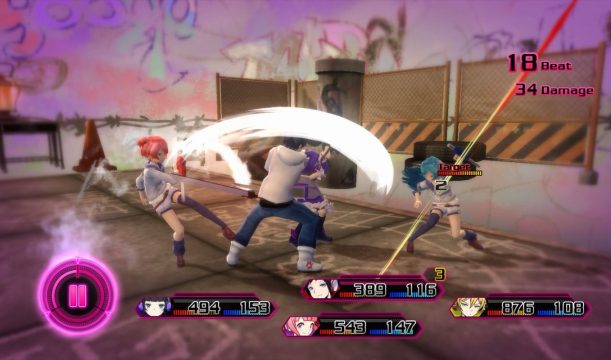 Combat is lifted almost directly from Tales of the Abyss.

Trading cards are one of the more unique and enjoyable aspects of character customization. They’re purchased in booster packs, each of which includes five random cards of five different rarities. Rarer cards provide more powerful bonuses, and new cards and booster packs are unlocked as the game progresses. The only downside to the system is that the cards are acquired completely by chance, and there’s no guarantee of getting a powerful card in each booster pack. Cards of the highest rarity are extremely hard to come by, and duplicates are commonplace.

Akiba’s Beat sports some pretty solid visuals. On top of the stylish dungeon designs, the neighbourhood of Akihabara is faithfully recreated, with colorful silhouettes filling out the crowds and giving the illusion of a busy district. The character designs are terrific, and the Imagine Drive’s music is accompanied by terrific, song-specific art overlays that add great visual spice to battles. Unfortunately, the enemy designs, despite being solid, are minimal in quantity. In fact, aside from bosses, there are less than a dozen enemies that are palette swapped in every dungeon.

The sound is also excellent, featuring a top-notch English voice cast that stands out as one of XSEED Games’ best, and a terrific collection of pop songs in addition to regular score. Sadly, that score is far less catchy than the game’s pop song collection, and the pop songs themselves are criminally underused. Since they only play while the Imagine Drive is activated, and can’t be listened to outside of battle, many players may never hear all of them all the way through.

Despite a great localization and plenty of solid aspects, Akiba’s Beat‘s strengths never manage to overshadow its glaring problems. Its copy-paste combat system, constant revisiting of dungeons, and other minor problems all add up to a bland and occasionally irritating experience.