I Have a Feeling We’re Not in R’lyeh Anymore

The most telling reason why Achtung! Cthulhu Tactics fails to impress is not because of its dull combat scenarios, lazy enemy AI, lack of tactical options, or uninspired presentation. The true culprit behind Auroch Digital’s disappointing adaptation of Modiphius Entertainment’s pen-and-paper tabletop campaigns is its perplexing lack of content related to the Cthulhu mythos. With such an imaginative intellectual property as “Cthulhu, with Nazis”, not to mention the greater Lovecraftian mythos as a whole, it’s a real shame that the developers didn’t see fit to stretch the bounds to include at least a little of the sanity-destroying Great Old Ones connected to its title.

Cthulhu Tactics directly takes its setting and plot setup from its tabletop inspiration: the year is 1944, and World War II is at its height. As part of their global campaign, the Nazi forces have delved deep into occult research, in the process breaching the door to other, horrific universes. Subsequently, two distinct factions within the German military, the Nachtwölfe and the Black Suns, have learned to develop experimental weaponry and harness eldritch forces from the Void for their own twisted attempts at world domination. The Allied forces’ answer to these new threats are four troops of their own, each with experience in the supernatural: French resistance leader Ariane Dubois, Corporal Akhee “The Eye” Singh, Sergeant Carter, and Captain Eric Harris.

This four-man team is taken straight from the game’s source material, including the characters’ concept art. Likewise, the general conflict between the supernatural arms of the two opposing armies mirrors the works the game is based on. In terms of content, Cthulhu Tactics certainly doesn’t overreach by introducing a lot of purely original concepts and characters, which could almost be a good thing. But a bit of post-game research on the tabletop content reveals just how limited the scope of the content included in the game actually is. The majority of enemy units consist of various types of Nazi stormtroopers; they range from sharpshooters to hulking brutes, and from commanders to cultist acolytes, but they’re all human. There’s a grand total of just one single type of eldritch creature that puts in an appearance, and it certainly isn’t The Great Old One himself. 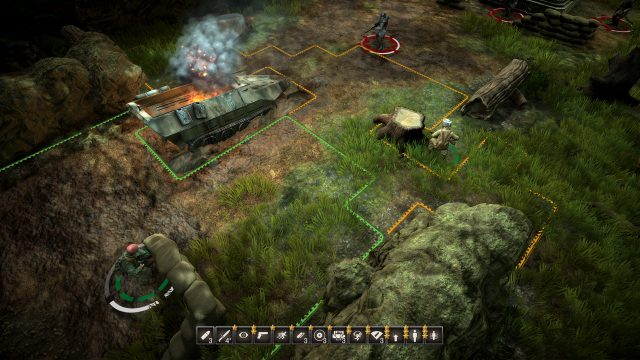 This lackluster forest environment is unfortunately par for the course for a good chunk of the game’s runtime.

Unfortunately, the boredom summoned by the underwhelming enemy variety is just further compounded by the dull, generic settings that play host to the game’s just-over-twenty missions. The story begins in a nocturnal forest, which is understandable as the team is tasked with rendezvousing with troops that have parachuted into this enemy territory. But all hopes of an eventual change of scenery are dashed as mission after mission reuses the same bland forest environment, followed by an equally generic underground military bunker complex. The worst offense here is the lack of tactical options, as there is rarely the chance to, for example, divide and conquer, and there are even entire battles that take place in straight, narrow corridors entirely devoid of opportunities for cover.

Combat itself, especially on the game’s suggested Normal difficulty setting, doesn’t win it many points either. The player’s four-man squad doesn’t evolve too much over the course of the game, save for acquiring some new abilities using earned experience points prior to capping out at level ten. A number of the unlockable skills are interesting and entertaining, but the uninspired enemy variety and point-shoot-win environments all but squander some of the late-game abilities entirely. The team doesn’t grow as a unit, its members fail to evolve or connect with each other in interesting, character-building ways. While other tactical games may give an option to grind in order to even the odds, Cthulhu Tactics‘ main campaign simply begins to feel like one interminable grind to the end before long.

Though Normal difficulty is explicitly suggested for players new to the game, many will realize that doing so is a mistake. Calling the enemy AI at this setting forgiving would be a kind understatement. There are countless times when an enemy unit will rush right past one of the poorly-concealed protagonists, and perhaps remain within range and choose not to attack at all. Other times, enemies just shuffle impotently back and forth from one place to another, expending all their action points without actually going on the offensive at all. Though I feared the AI to be broken, starting a new campaign on higher difficulties, while not improve the enemy or location variety and design, at least gives them some sharper teeth to bite with. An exception to the hastily slapped-together combat encounters, though, is the game’s final boss mission, which required strategy, perseverance, and some tactics not required at any point prior to it; it’s the kind of mission that this game sorely needed more of, but instead just feels like trying to put a band-aid on an open sore; simply too little, too late. 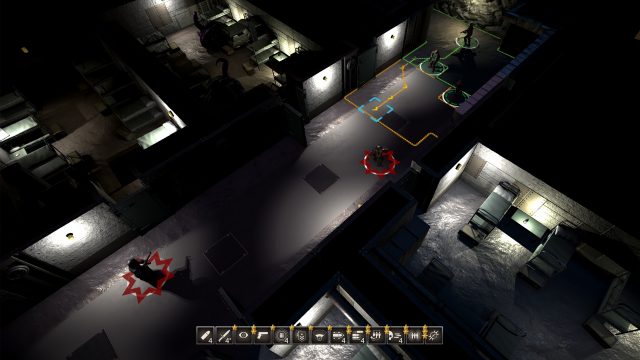 Nothing says “tactical approach” quite like a long, narrow hallway.

The game’s grind is further dragged out by the repetitive musical score during combat. Players are exposed to the same looping audio track that kicks in whenever the group encounters an enemy patrol such that by the time a second, equally repetitive track joins the line-up several hours in, it almost comes as a relief. A nice touch, however, are the vintage radio tunes that play during the mission select screen, and having each mission briefing fully voiced is likewise appreciated. The graphics, however, lack any true polish to help them stand out, while the inclusion of a cinematic battle camera could have done wonders to spruce up the action and highlight some character models more favorably.

Achtung! Cthulhu Tactics is the kind of mash-up property that by all rights should have the right ingredients to hit that sweet spot. By all accounts, the original property actually does manage to do just that. But the digital adaptation lacks on several fronts, not the least of which is the unfortunate underusage of the occult element of its namesake. The grindy battle system with little enemy and environmental variety is also nothing to write home about. Cthulhu Tactics sounds like an intriguing mix of its two titular elements, but fails to deliver on the promise of either.