It’s a bit of a surprise that more games have not followed BioWare’s Jade Empire in combining martial arts and RPGs. However, French developer Sloclap and publisher Devolver Digital have joined forces to provide a game that does look to combine the two and provide RPGamers that close-range kick-punching action. While Absolver seems to get the combat aspect of things down well enough, it fails to back it up with any meaningful direction and content for players, resulting in an entirely forgettable experience.

Players control a Prospect, a disciple looking to become one of the titular peacekeeping Absolvers. To do so they must don a mask and enter the ruined city of Adal and prove their worthiness by defeating other Prospects and characters within. Outside of this intriguing premise, however, there is hardly any story to be told. A very small number of characters get intro cutscenes before fights against them, but even these are limited to a couple of sentences that have zero context. A couple of sporadically-appearing NPCs give a tiny sliver of background to what Adal itself is, but again aren’t enough to add any interest. The little nuggets all sound potentially interesting, but nothing remotely worthwhile is done with them.

Absolver isn’t shy about throwing players into the thick of it after a short tutorial section to provide its controls, and can seem a little overwhelming at first because of it. With players able to fully edit their move sets, it seems quite technical, however, players can get by with a couple of simple combos. The difficulty might seem a bit punishing at first, but once players realise that the one-on-one fights are more about being patient and exploiting openings than simple aggression it becomes a lot easier to get by. Combat generally feels nice and intricate, but isn’t too hard to get the hang of. Unfortunately, a lot of the time regular fights against AI opponents ruin the occasional beauty of these solo encounters, becoming simple mass brawls as multiple enemies turn up and get in the way.

To complete the “story” campaign, players wander through Adal’s interconnected areas and defeat six Marked Ones and three other bosses, after which the path to the final boss is unlocked. This can easily be done in around five hours, and though quick it’s not a riveting experience. These major fights are engaging, but the opponents just feel too similar to the unnamed regular opponents everywhere else. The location designs are poor as well, with nothing to find outside of the required opponent apart from some average loot, and the lack of memorable landmarks often makes it very confusing to figure out where players are in relation to anything else. 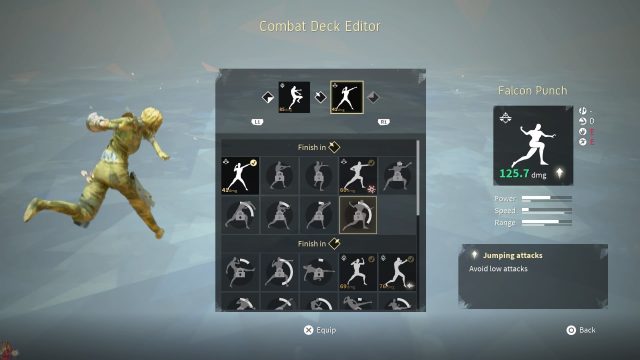 Sadly the proper cry is not used when this attack is performed.

As players beat up on opponents they will gain experience and level up, which provides a point to spend on one of six attributes. There are plenty of slots for equipment, which is dropped by some enemies or found scattered throughout Adal and features an interesting trade-off. The greater defence provided by a piece of equipment, the heavier it is. Heavier equipment will reduce the player’s attack power and potentially drop their movement speed. That said, the drop-off point for when the more defensive equipment isn’t worth the drop in power and speed is pretty lenient. New moves are learned from others by successfully defending against them enough times, though players will need to win the relevant fight for it to be taken into account. There’s no real punishment for dying otherwise, which can also happen quite easily through falling; players are just dumped at the last checkpoint they came to.

Arguably Absolver‘s best area is its visual styling. The idea of having everyone’s faces hidden behind a mask adds a nice flavour to the world and the flow of combat is great to watch at times, though it’s far from every encounter. The colours are generally pleasing throughout, including in the architecture, though as mentioned above the difficult-to-navigate layouts and lack of memorable landmarks are major issues. The audio is also decent, there are plenty of satisfying thuds in combat, and the background music creates some atmosphere without standing out. 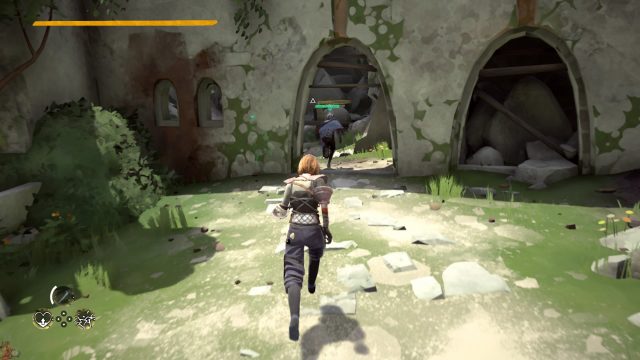 Say hello to the new doorway, same as the last doorway.

The network performance from my experience hasn’t been terrible — other reviews indicate this is an area that has been improved upon since launch — but it hasn’t been perfect either. There have been times when the game has lagged, obviously having an impact on a combat system where everything is about timing and reacting. It also appears that when in online mode, there are more occasions of meeting larger groups of opponents. This is fine when players are able to team up with others — any in-game communication is done through gestures — but for those who aren’t it just becomes a pain. The tradeoff is that players either have to deal with slightly inferior performance and extra frustration, or an offline mode devoid of interest.

The list of things that I had yet to unlock after going through the campaign show that Absolver is intended to have some long legs. Unfortunately, during those first few hours it doesn’t provide anywhere near enough reason to actually stick around. The single-player feels mostly meaningless and the few flashes of interesting aspects are quickly lost in the labyrinth that is Adal.