Chained Echoes is an upcoming JRPG-inspired game developer by Matthias Linda and published by Deck13, described as a combination of a fantasy world with mechs, magic, and airships. It is planned to be released in the 4th quarter of 2022 on PC, Mac, Linux, PlayStation 4, PlayStation 5, Xbox One, Xbox Series X|S, and Nintendo Switch. RPGamer was able to talk to Matthias Linda about what awaits players in the game.

(Update — Shortly after the publication of this interview, Deck13 and Matthias Linda announced a December 8, 2022, release date for the game.)

Johnathan Stringer (RPGamer): Can you give a quick overview of the game’s setting and game mechanics as well as its inspirations? Who should be interested in Chained Echoes?

Matthias Linda: I would describe the setting as a mix of fantasy and steampunk. Mechs meet magic. In a world where birdmen and lizardmen are just a normal thing running around, it is a turn-based RPG where you fill up your party with up to 8 members and try to save the world. It is heavily inspired by games such as Suikoden 2, Terranigma, Chrono Trigger, and Final Fantasy VI. And I’m not telling anyone to be interested in the game, but if you grew up with the mentioned games, I really hope you would enjoy my game as well. 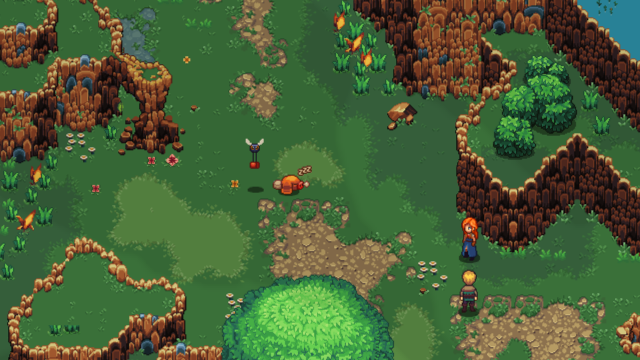 JS: What new twists to the turn-based battle mechanic are in Chained Echoes that will set it apart?

ML: I hope to have created a system which will be enjoyed by fans of turn-based JRPGs. However, it indeed comes with a small twist called the Overdrive System. Every action by the player, and by the enemies, influences the bar. Some actions will raise it, others will lower it. In the normal stage, everything is normal. If you reach the Overdrive section of the bar, you do way more damage and take less. However, if the bar reaches the Overheat, it is the other way around. From the feedback I received through the Kickstarter backers and my publisher, I seem to have succeeded in creating a combat system which feels super tactical and yet fast-paced.

JS: What is the overall tone of the game? More light-hearted and silly, or does it tend to be a darker and more serious adventure?

Long answer: It heavily depends. See, I love puns, even bad ones. So there are enough moments in the game where you will most likely hate me for a bad pun. Some enemies might seem like a joke as well. I mean, who would expect a toucan hummingbird mixture which attacks you with a massive fist? That’s rather silly, isn’t it? On the other hand, the whole continent suffers from war. The story itself has very serious topics and there are quite a bunch of very dark scenes in there. 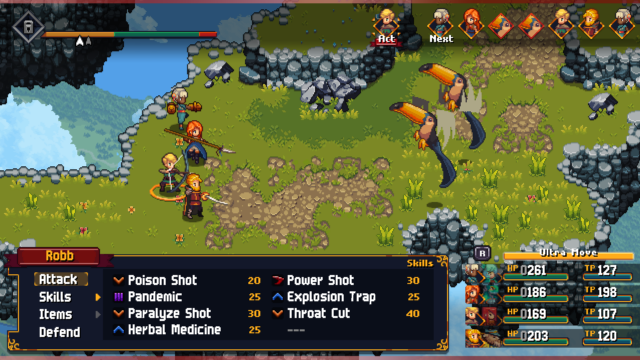 JS: In the provided game description, you remarked that this was created by a one-man developer. Which aspects of the game’s development were the most challenging for you?

ML: Finishing it. Honestly, I must have been insane when I started all this. When you hear horror stories of new indie studios trying to create a massive RPG with tons of mechanics and they fail… I can understand that. It is natural to fail when you try this as your first project, and I have no idea how I made it this far.

JS: In the promo video, it seems there are times you can switch between being in or out your mechs at will. Are their limitations to this? What benefits are there in fighting out of your mech rather than in?

ML: There are certain limitations. In dungeons you can’t use Sky Armors. And you can’t call them if the ground is not made for it. Certain areas can only be reached with them, and once you get them, which takes a while, you will also need them. Some fights can’t be won without them.

ML: Characters can’t be customized. There are 8 main characters, to fill up one full group. But there are also a lot of side characters you can pick up. And in between the main protagonists it differs how important they are, of course. What you can customize, however, are your mechs and airships.

JS: How many recruitable characters are there?

ML: Quite a bunch. I don’t know the exact number out of my head, but there are some combinations which are super helpful in certain situations. 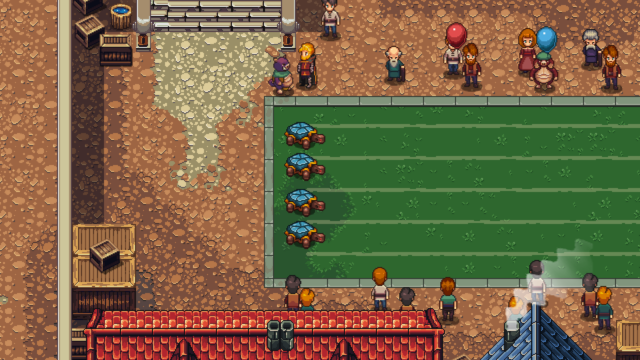 JS: With one of the game themes being airships, is there freedom of exploration during the game, or is it a more linear experience?

ML: It is a mix. Especially in the beginning, the game is very linear and follows a strict path. Once you get the airship and can travel around, the world opens up and you can go for sidequests and easily revisit older locations to fully complete them.

JS: Chained Echoes was supported by a successful Kickstarter campaign. How was the experience being involved with a Kickstarter during the development of the game?

ML: Exciting and exhausting. I am among the lucky ones who reached their goal and it was a lot of work preparing and keeping up the momentum during the Kickstarter. But it was fun, at least for me. I was well prepared and did my homework upfront and had also an agency who supported me.

JS: Once finished and released, and assuming some level of success, have you any thoughts on what is next? Potential sequels for Chained Echoes or a completely new game?

ML: Oh god, please let me finish the game first! Jokes aside, I have tons and tons of ideas in my head. And there are definitely stories in the world I’ve created I could tell. But the honest answer is, I don’t know yet. I haven’t made a decision yet.

We would like to thank Matthias for his time answering our questions about the upcoming release of his first developed game. Chained Echoes promises a classic story-driven RPG experience and will be available by the end of 2022 on PC, Mac, Linux, PlayStation 4, PlayStation 5, Xbox One, Xbox Series X|S, and Nintendo Switch.