NIS America announced that it is releasing a dedicated PlayStation 5 version of Nihon Falcom’s action RPG Ys IX: Monstrum Nox. The PlayStation 5 version will launch in spring 2023 and come with cosmetic DLC from its other versions included. It will be available physically and digitally, including a $89.99 Limited Edition, which is available to pre-order from NIS America’s online store in North America and includes: 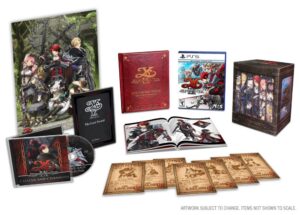 Ys IX: Monstrum Nox takes place in the “prison city” of Balduq, where Adol finds himself imprisoned. In prison, a mysterious woman named Aprilis turns him into a Monstrum, a being with supernatural Gifts and the power to exorcise monsters. Ys IX: Monstrum Nox originally released for PlayStation 4 in North America and Europe in February 2021, with PC, Nintendo Switch, and Google Stadia versions released later in the year. Those looking to read more about the game can check out Joshua Carpenter’s review of the PlayStation 4 version.