Monster Menu: The Scavenger’s Cookbook Being Served Up Next Year

NIS America announced it is releasing Monster Menu: The Scavenger’s Cookbook in North America and Europe. Released in Japan as Shikabanegurai no Boukenmeshi, which translates as “Eating the Corpses as an Adventure Meal”, the game will release for PlayStation 4, PlayStation 5, and Nintendo Switch in spring 2023. It will be available as a physical Deluxe Edition through selected retailers, while an $89.99 Limited Edition is available to pre-order through NIS America’s North American and European online stores that contains: 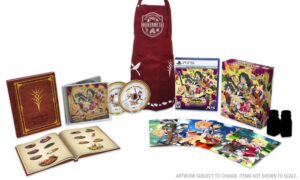 Monster Menu: The Scavenger’s Cookbook is a tactical dungeon-crawler that follows a group of adventurers who become stranded in a large dungeon. They need to survive using whatever resources they can find, including eating the monsters they defeat.