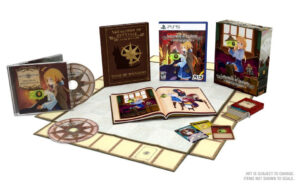 Labyrinth of Galleria: The Moon Society was released in Japan under the title Coven and Labyrinth of Galleria and is a follow-up to Labyrinth of Refrain: Coven of Dusk. The game features a brand new cast and is set in a remote estate that is said to have a labyrinth filled with mysterious treasures. Madame Marta and her assistant Eureka travel to the estate to investigate the labyrinth, tasking players with exploring the labyrinth using soul-infused puppets.