Atlus released a new trailer and details for the upcoming Soul Hackers 2. The trailer focuses on party member Arrow, one of the game’s major characters who is marked as a “protection target” for main protagonist Ringo by the Aion system that watches over mankind.

Arrow is a Devil Summoner, one able to command demons to fight using customisable devices called COMPs, and part of the Yatagarasu faction. His COMP is a gun-type that uses gun and ice-based skills. Arrow is good with support skills and has strong endurance. 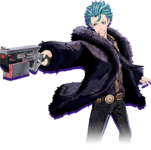 The update introduces two other characters associated with Arrow. Raven is former member of Yatagarasu who has retired and now runs an orphanage. He was Arrow’s mentor and Arrow still goes to him for advice. Meanwhile, Kaburagi is a member of the rival Phantom Society faction. He and Arrow have run across each other in the past, and he ends up managing to kill Arrow, though Ringo revives him as part of her mission by interfering with his soul.

Soul Hackers 2 is a new title in Shin Megami Tensei’s Devil Summoner spin-off series. The game is being developed for PC, PlayStation 4, PlayStation 5, Xbox One, and Xbox Series X|S and is planned to release in Japan on August 25, 2022, and in North America and Europe on August 26, 2022.