Demeo successfully emulates the collaborative experience of tabletop games, with players very much encouraged to discuss strategy and potential actions between themselves.

Resolution Games’ Demeo has been giving VR players a virtual tabletop experience since May 2021, but now the studio is giving non-VR players the chance to get in on the action with Demeo: PC Edition, which arrives on Steam Early Access on April 7, 2022. RPGamer was given the opportunity to join a short play session and chat with Resolution Games’ CEO and founder Tommy Palm and producer Gustav Stenmark to learn how the game makes for an enjoyable collaborative experience.

Demeo puts players in a virtual gaming room, complete with appropriate decorations and a game table in the middle where the action takes place. While the VR version lets players view where their friends’ hands are and may be pointing, the PC Edition lets players look around as they wish, with visual communication made possible by letting players draw lines to highlight or point to things of interest or make suggestions about where to go next. Any story seems to exist largely as an excuse for the dungeon-crawl, and the demo was very much simply about the fun of teammates strategising and fighting their way through dungeons, though this isn’t a bad thing and feels more geared towards Demeo’s strengths. 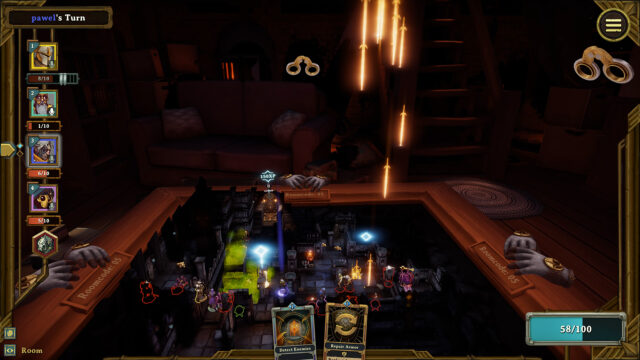 The game features a set of adventures, with three available at launch, each of which task a party of up to four players venturing through a three-floor dungeon to defeat the boss at the end. It is fully turn-based, with each player able to select one of five classes at its launch — hunter, sorcerer, assassin, guardian, or bard — although the bard wasn’t available for this session. The goal of each floor is to find and defeat the enemy that has the key before reaching the floor exit. Line of sight is a major mechanic, and players will get nervous as they work through corridors and rooms waiting to find out what enemies are hiding behind doors and around corners. The tabletop emulation comes complete with character and enemy miniatures and an attack die to roll on the table, augmented with visual skill and attack effects as well as pertinent information readily available through the UI.

Each class has a regular movement range and a standard attack, while each player has a hand of cards given at the start, with further cards obtained through the adventure. Movement and attacking both use up one of two action points per turn; certain action cards such as drinking a potion are free to use on the player’s turn, though most also use up one action point. Demeo hedges between set classes and flexibility — the guardian is clearly designed to act as a tank — but are balanced in a way that players can adapt with what’s at their disposal.

Downed players can be revived freely by their nearby allies, but are considered defeated after being downed three times. Care does need to be taken; while our first demo encounter started off well with a couple of powerful AoE attacks, we clustered around an ice lamp that caused the entire party to be frozen when it was hit by an enemy. However, despite a couple of scrapes and a few enemies breathing down the party’s necks, we managed to get through to the exit and gained a satisfying feeling for doing so. Being able to combine attacks and status effects is one thing Resolution Games has prioritised and certainly helps encourage teamwork between the party. 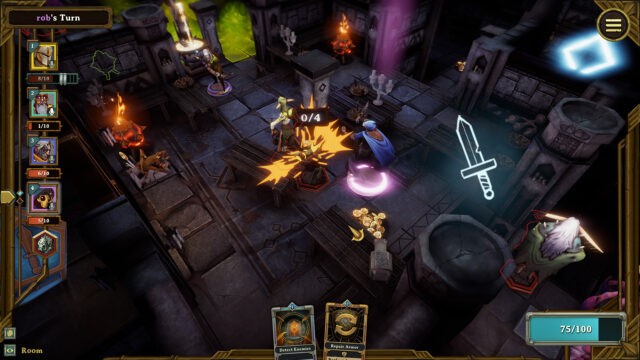 Throughout each floor, players can find gold, as well as treasure chests that usually grant a new card to every player. Picking up the gold by placing one’s piece on it gives players more to spend at the store between floors on new cards such as potions. The controls and camera behaviour have transitioned effectively from VR into non-VR and are very intuitive, though it’s easy to be careless and inadvertently activate an ability while still pondering moves. Visuals are fairly colourful and work well for the game’s playability, making combatants, environmental hazards, and other points of interest clear. The music, sound effects, and late dungeon master commentary provide a straightforward audio backing without getting in the way of player chat.

Demeo successfully emulates the collaborative experience of tabletop games, with players very much encouraged to discuss strategy and potential actions between themselves. The game is intended to be challenging. It makes use of board game-style randomisation, changing the layouts and positions of monsters in each playthrough. This provides plenty of reasons for players to take multiple shots at each adventure, including potentially setting their own challenges like selecting an all-bard party. While it can be played solo, with the game adjusting the challenge based on the number of players, it definitely feels like one best played alongside others. It’s incredibly satisfying to work together to come up with and execute a series of effective moves. 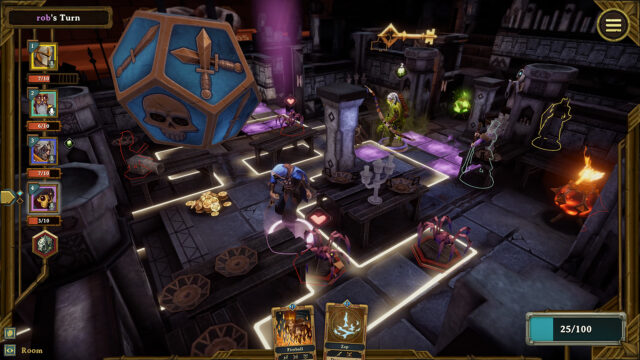 The PC Edition will support cross-platform play with its VR version, something that Resolution Games wanted form the outset and one of its challenges of development. The structure of the game should make it easy to add more content in future, with at least two additional adventures coming down the line along with more classes. Additions have been steadily coming to its VR version, including a newly-added player hangout area for between adventures, while a PvP mode is coming later this year. The opportunity for mod support to be a major draw is also something the developer is keenly aware of.

Demeo feels ideal for groups planning a few gaming evenings together, streaming or in private, with each successful adventure planned to last for a few hours, similar to a regular tabletop session. The shared satisfaction in emerging victorious, or concern at rounding a corner to a mass of enemies, brings it in line with its inspirations. Those looking to have virtual fun together will do well to give Demeo: PC Edition a look. The Steam Early Access version will launch on April 7, 2022, with a full release expected to follow around a year later.