In this edition of the column, we take a look at Pupperazzi on PC.

One of my favourite things about going out for a walk is meeting dogs. Even when you’re having a rough day, the bright and cheerful greeting of a dog can really take the blues away. Sundae Month’s Pupperazzi is a relaxing photo game where players will meet lots of good doggos, give them lots of pets, and have them strike a pose.

In Pupperazzi, players are tasked with photographing and cataloguing a variety of dogs. Zooming around Muttropolis and neighbouring areas, the goal is to photograph dogs, sending the best photos to DogNET for social media praise. Each area can be photographed during daytime, evening, night, and during fog. Visiting each area has its own unique set of photo objectives that will help with the player’s social media ranking. As players build their social media reputation, they will receive bonks (the game’s currency) and unlock new camera equipment and unique styles of film for purchase at the shop.

Taking photos in Pupperazzi is such a joy, as there is always something new or different happening in each of the game’s areas. From dogs driving motorcycles to climbing the largest sandcastles, there are tons of crazy photo opportunities, and the game does a great job of varying the objectives for the player each time they enter an area. In fact, Pupperazzi is not only very big on experimentation with the types of lenses and film, but also in terms of the kinds of photos being requested. These requests can include black and white old-timey portraits of dogs or using a pixelated lens filter to distort the subject of the photo. This constant encouragement for players to experiment is truly appreciated, allowing them to get interesting shots. 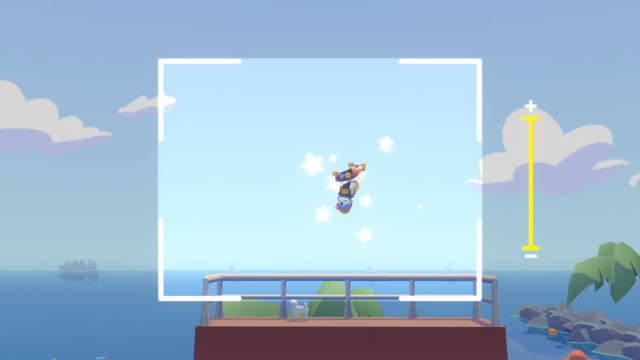 That is a lot of air time, Tony Bark!

Furthermore, the varying objectives also help keep the game fresh, as sometimes there are specific dogs to photograph or events that are happening in the game worth investigating. There are also tons of objects to interact with, such as sticks, balls, and frisbees to help players get more dramatic shots. Players can also pet the dogs, because who wouldn’t want to pet a new friend?

Playing Pupperazzi with a mouse and keyboard feels very comfortable. Players can right-click to snap a photo, use the scroll-wheel to zoom in on a subject, and even change the camera’s rotation from landscape to portrait. Players can also crouch to get close-ups, and even take videos. Players are limited to ten photos in the beginning, but as they gain social media presence, that number can be increased up to fifteen. If players dislike some of their photos, they can recycle them to gain the film back. Players can also save photos as favourites to share on social media or use in their dog catalogue.

When posting photos to DogNET, players will get ratings from social media followers, sharing their opinions and expectations about the content. Reading the social media comments is delightful, as there’s nothing worse than thinking you have a nice centre shot of a dog, only to be ragged on because they weren’t wearing a cute enough outfit. Some followers will even tell the player that spamming dog photos is “too much” — but I am sorry if there are so many good boys and girls; how can I not spam billions of photos? 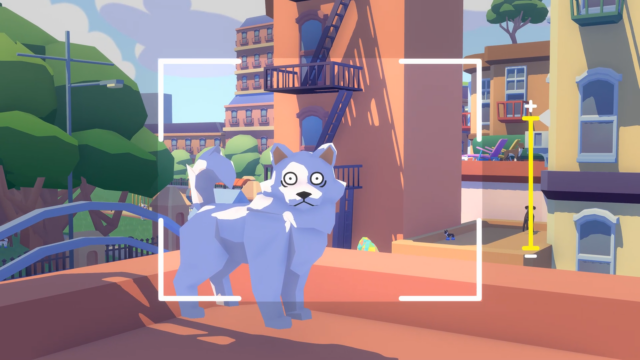 The horror of being photographed!

Completing the main game will take players anywhere from two to four hours tops, though every area has lots to uncover upon revisiting. While the areas are not large in scope, they don’t feel underwhelming either. There’s a good amount of content in each location, though players may feel the fatigue of revisiting the same areas over and over again just to complete new objectives. My favourite location was the Moon because the idea of dogs bouncing around with no gravity makes for some hilarious photo ops and, given physics, a lot of hilarious moments of dogs being thrown around the map can occur.

There are not a lot of games that make my heart feel full of joy the way Pupperazzi does. Being able to leisurely take photos of dogs acting adorably, crazy, or sleepy is incredibly relaxing, and it’s definitely helped ease some of the anxiety I often feel every day. Every photo is unique, and there’s always something new to find in the game that will bring a smile to your face. In a world where everything feels so exhausting, it’s nice to enter such a wholesome world that Sundae Month has created. While my real dogs don’t appreciate constant daily snaps (or fake dogs borking inside the house), it’s nice that the dogs of Pupperazzi are always ready to make me laugh and put on a show.