Fans of the series should be able to feel like its in safe hands with Frima Games.

Over a decade since the last release, the Disciples series is making its return. Kalypso Media enlisted Frima Studio with the creation of the new title, Disciples: Liberation, which is set to launch on October 21, 2021, for PC, PlayStation 4, PlayStation 5, Xbox One, and Xbox Series X|S. RPGamer was given the opportunity to watch a brief demo of the game and check out a few hours of a recent closed beta build.

Although the game is set in the same world as the three previous games, Disciples: Liberation is built around the story of its new main protagonist and thus doesn’t require any previous knowledge from players. The game puts players in the role of Avyanna, a mercenary destined for bigger things. After an assassination contract goes wrong, she manages to open a portal that brings her to the ancient but empty city of Yllian. Sensing the opportunity to create a new home for her and her companions, Avyanna sets out to find allies from the four major conflicting factions on the land of Nevendaar.

Like previous entries, Disciples: Liberation includes three main elements: adventure maps where players explore the world and move to their next quest and story markers, tactical combat, and a base city where players build up their forces and upgrade facilities. After the brief prologue, the beta provided a choice of four decently-sized maps in which they begin their campaign proper, each corresponding to one of the factions as Avyanna begins her search for allies. In these maps players can come across numerous combat encounters, capturable points (such as mines) that provide resources every hour, and various quests, some of which may not be accessible until later on the game. Disciples: Liberation ultimately branches out into an almost open world with thirteen distinct regions that players will be adventuring through. As a new feature to the series, it includes more personal dungeons with lots of paths and smaller rooms to explore. 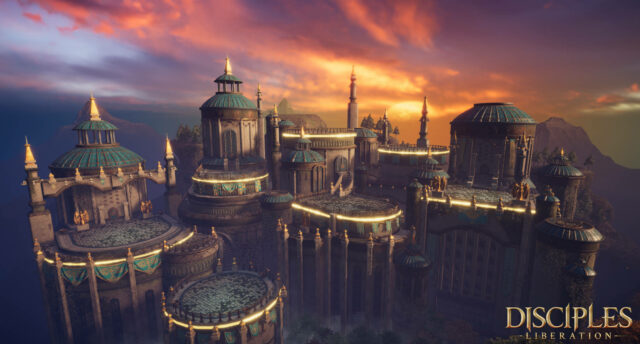 Player choice is a big selling point for the game and comes across in multiple ways. Not only are there choices in Avyanna’s character build and the make up of their forces, as well as the immediate choice in which faction they seek out first, but also players are given lots of choices in conversations and how they approach quests. Choices are given with an icon that shows the moral nature of that response, such as peaceful or intimidating, but to make players think or stick true to character, the reception of those responses depends entirely on the context. It wasn’t apparent in the brief time available with the game, but Frima Studio promises that player choice will have big impacts on Nevendaar and how it ends up. Companions are another part of this, with their own stroyline and an evolving relationship with Avyanna based on her actions through the game.

There are many opportunities for combat, and it’s likely that players will spend the majority of their time in it. Combat is turn-based and sees the two sides lining up on either side of a hex-based grid. The player’s active force can have up to ten units including Avyanna, up to two story-based companions, and any additional other soldiers providing Avyanna’s leadership total permits then, while three more units can be assigned as backline troops that provide buffs to the frontline fighters.

Combat rounds feature individual unit turns, with the order based on an initiative score, and each combatant has two actions. However, the actions available differ between combatants. The two actions available are given a designated colour on the UI: red, blue, or gold. Red actions can only be used for an attack or skills, blue actions can only be used to move, while gold actions can be used for anything. There is a bonus to not using available turns, as each unused action restores 10% of that unit’s health when they end their turn. Players can also choose to delay a unit’s turn until the end of the round before taking any actions.

The combat and turn basics are very easy to get the hang of. Additional depth comes in various buffs and status effects, which can be supplied by special hexes on the map in addition to combatant actions. In addition, Avyanna stands out as a unique character thanks to her access to a spellbook. This gives players a wide variety of extra abilities and spells that expands as they research new spells throughout the game. Each spell uses up Avyanna’s limited mana supply so players can’t just go flinging them around as they please. 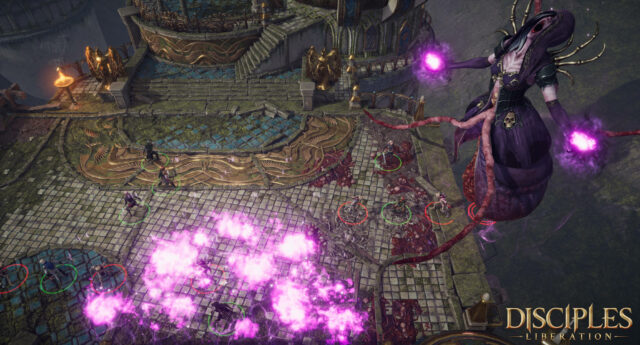 Once units on the player side are defeated, they are moved to the graveyard, where they can still be involved in battle thanks to certain abilities that utilise it. However, any units in the graveyard at the end of combat are lost forever. This doesn’t apply to companions, however, as they are revived after combat, albeit with only a small amount of health. The main challenge that it looks like the game will have, at least early on in the beta, is that combat can become repetitive quickly. Hopefully, as players expand their city and get more units, a greater variety in encounters will be able to keep players interest, especially as Disciples: Liberation promises to be a lengthy title in the eighty-plus-hour region.

Most units have a single equip slot for a mana shard that is the total of their customisation. Otherwise they all have a regular level that be increased naturally through experience points or trained up by spending resources in Yllian. Story companions are similar, but can also receive a weapon on top of the mana shard. Avyanna, however, has multiple elements that can be changed, including a full set of equipment that is visible on her character model. After a certain point, she can change to one of four classes — Warlord, Hexblade, Seeress, and Witch — each with an additional advanced class unlocked down the line. She also has a skill tree, divided into three sections, and upon each level up she gains a point to spend on it. Players can readily reset Avyanna’s skill tree and change class for a low cost, so they aren’t locked into any character build decisions.

Avyanna is able to teleport back to Yllian at any point. Here, she can place facilities, which are used to recruit and train new troops or craft and upgrade equipment. Each recruitment building is associated with a faction and provides specific troops, with more unlocking as the building is upgraded, which first requires that Avyanna is on good terms with the faction. Players have some flexibility with these buildings and can phase out an upgraded building and replace it with something else, with the ability to restore it later with the upgrades intact. These buildings use the resources gathered from across Neverdaar, found during exploration and regularly supplied from captured points.

Fans of the series should be able to feel like its in safe hands with Frima Games. It’s definitely a game that’s built for the long-haul, as well as having lots of replay value through the choices available, so it’s tough to come to any conclusions from a short time with it, but what I’ve seen indicates it has a solid foundation. It certainly won’t be lacking in contact, with lots of quests and potential points of interest or challenges, but the main question at the point is if it has the necessary variety to keep players engaged. RPGamers will be able to find the answer when they arrive in Nevendaar in just a couple of months.