In this edition of the column we take a look at some Victorian courtroom drama with Capcom’s The Great Ace Attorney Chronicles.

Though the first three games originally released on the Game Boy Advance in Japan, in North America and Europe Capcom’s Ace Attorney was one of the standout adventure series of the Nintendo DS/3DS era as players followed defence lawyer Phoenix Wright and his later understudies’ attempts to defend their clients and get to the truth behind their cases. However, while the West ended up with all of the mainline entries, a number of its spin-offs sadly didn’t follow suit. Fortunately, with the release of The Great Ace Attorney Chronicles, that oversight has been fixed for two of those titles, and western players are now able to dive into a pair of the series’ strongest titles, made all the better by a superb localisation.

The Great Ace Attorney Chronicles takes place around the turn of the twentieth century as Victorian Britain and Meiji-era Japan make a significant breakthrough in their relationship, including the signing of an important treaty. The game follows student Ryunosuke Naruhodo, an ancestor of main series protagonist Phoenix Wright, who starts the game accused of murdering a visiting English professor in Japan. After successfully conducting his own defence with the help of friend Kazuma Asogi and assistant Susato Mikotoba, Ryunosuke ends up travelling to Britain as part of a student exchange program, where he is swiftly given hands-on experience acting as a defence lawyer in the British courts. The Great Ace Attorney Chronicles is perfectly good jumping-on point for new players, only containing minor references to other titles; everything else works just as well with fresh eyes as experienced ones. 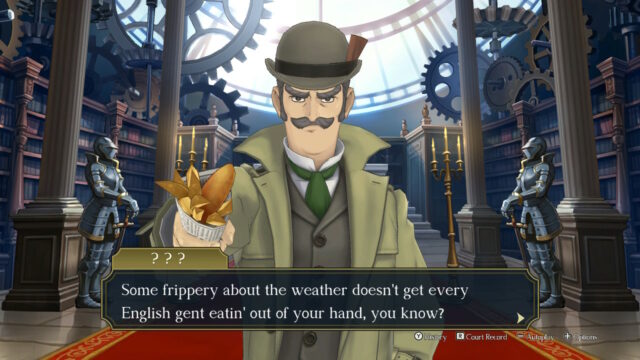 The format and flow of the game will be intimately familiar to fans of the series. Each game is split into five episodes, with each episode focusing on a particular case, though there are story threads linking all of them together. The first case in each game takes players straight to the courtroom, but all of the other cases include some investigations to set up the cast and establish the likely arguments and evidence that will come up in court. The formula has been successful for many titles now and continues to be so here, and it’s further helped by The Great Ace Attorney Chronicles streamlining its cases a bit more, with the first multi-day trial not even occurring until the second game. Cases are still of a good length, averaging around five to seven hours, but it doesn’t feel like there is unnecessarily padding or twists thrown in just to extend things. Some of the logical leaps and practicalities are dubious and all of the secrecy gets a bit messy towards the end, but the pacing makes it easy to let it go and enjoy uncovering all of the mysteries.

The Great Ace Attorney Chronicles very much continues the series’ liberal take on what happens in court, but brings some new and effective twists. Though a small number of cases feature the series’ traditional format of requiring a single judge to be swayed, cases in Britain make use of a six-person jury. It’s still a patently ridiculous take on actual legal proceedings, as jurors are entitled to cast their vote for guilty whenever they wish, and will readily do so, while the ostensibly “random” selection process is very much a running joke. This threatens to derail defenses before things can really get started, but fortunately Susato and Ryunosuke uncover a mechanism to directly challenge the jurors’ reasoning for their votes and pit them against each other. Another new element is that multiple witness will regularly be on the stand at the same time, adding both more flavour to testimony and opportunities to challenge individual statements as the other witnesses react to them. 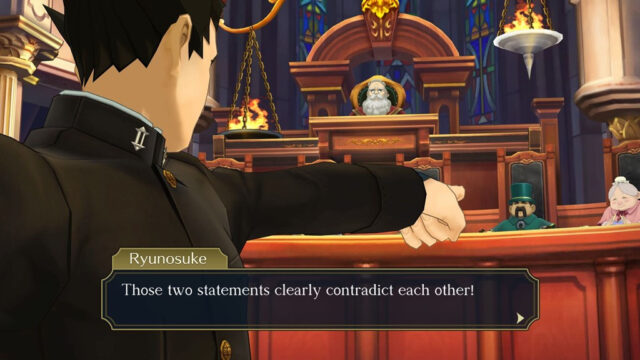 Jurors are quick to cast judgment, but fortunately their reasoning can also be cross-examined.

Investigations continue to take notes from point-and-click adventure titles as players move between locations, get information by talking to characters, or find pieces of evidence activating the triggers for progress. Courtroom proceedings are somewhat similar, with players needing to press witnesses for more information or produce evidence that proves a statement to be incorrect, though this might first require that players poke around all of their evidence to find things that might be hidden away.

Some contradictions can require a good memory for small details, but The Great Ace Attorney Chronicles always feels on the player’s side in terms of difficulty; it always offers hints at suspicious statements or whether it’s time to simply gather some more information, and there’s nothing in the way of traps to try and trick players. It doesn’t do anything revolutionary or too far from its comfort range, but what it does, it does with aplomb. For those wishing to just let their brain relax, The Great Ace Attorney Chronicles includes a Story Mode option, which requires no input from the player and just lets them enjoy watching the proceedings.

One of The Great Ace Attorney Chronicles’ greatest successes is its colorful and truly likable cast of characters, and its notable interpretation of a great literary detective and his trusted partner. Renamed Herlock Sholmes in homage to Maurice Leblanc’s version of the character for his Arsène Lupin stories, the eccentric detective provides much of the game’s comic relief thanks to his wild energy, offering deductions based on chaotic abductive reasoning that ends up somewhat missing the boat, requiring some course correction from Ryunosuke. Sholmes’ relationship with his partner Iris Wilson is also an enjoyable twist. Ryunosuke and Susato also make for a great partnership and are endearing primary protagonists, while the supporting cast is filled with memorable characters across the board. 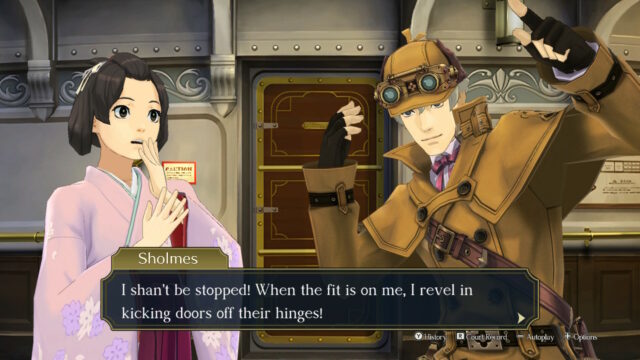 The great detective is an entertaining presence throughout.

The writing is a large part of what makes The Great Ace Attorney Chronicles so enjoyable. It is often humourously over-the-top, but never too much, and is filled with lots of entertaining comments, small touches, and characterisations that bring everything to life. There is the usual reliance on stereotypical speech patterns, but it’s at least done in a consistent manner across the games. It also has its fair share of camaraderie and still manages to pack plenty of emotion into the backstories and motivations of much of the cast. Capcom’s localisation, led by Janet Hsu, is a fantastic example of the art and works wonders with the mixture of Japanese and British culture at the heart of the game while keeping everything approachable and easy to understand.

Though other recent releases have certainly drawn my interest, once I started The Great Ace Attorney Chronicles, it was almost impossible to put down. The characters and writing just sucked me in and when one case ends, the desire to jump straight into the next is palpable. It’s a hearty recommendation for existing fans of the Ace Attorney series and anyone else interested in jumping into a new series of adventure mysteries in general.