1C Entertainment and Koch Media have opened pre-orders for King’s Bounty II. The game is available to pre-order physically and digitally for PC, PlayStation 4, and Xbox One and physically for Nintendo Switch with digital orders to open soon. The physical and digital standard edition is available for $59.99, with pre-orders including the Day One Edition Pack featuring in-game items. The digital Lord’s Edition is available for $64.99 and includes additional in-game items plus the Day One Edition Pack. The digital Duke’s Edition is exclusive to Steam and the Epic Games Store and contains the contents of the Lord’s Edition plus a digital art book and digital soundtrack download.

In addition, the companies announced the physical King Collector’s Edition, which is not yet available for pre-order. The edition contains a crown, a double-sided poster, a 36-page hardcover art book, and a soundtrack selection CD.

King’s Bounty II will launch on August 24, 2021, for PC, PlayStation 4, Xbox One, and Nintendo Switch. Those looking to read more about King’s Bounty II can check out RPGamer’s recent preview. 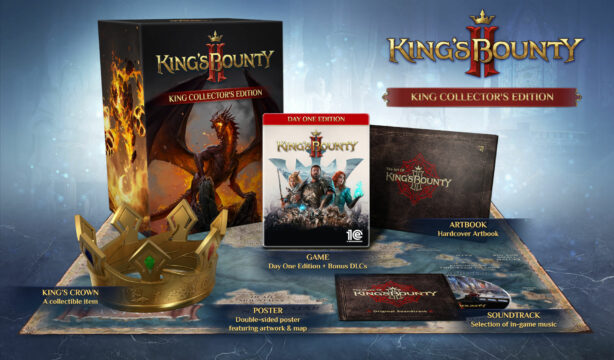