The game has managed to strike a decent balance between its exploration and combat, and the world itself is visually interesting and has plenty of quests to undertake.

A brand new King’s Bounty game is on the horizon, looking to combine the series’ traditional hex-based strategy gameplay with third-person open-world exploration. As King’s Bounty II launch is just a month away, Prime Matter and 1C Entertainment afforded RPGamer the opportunity to try out the game’s opening portions. Given that much of the information about the game and its systems is already present in our June preview, we won’t go into too much detail here and focus largely on how everything in coming together.

The game starts with players selecting one of three protagonists, each with distinct backgrounds and combat styles. King’s Bounty II doesn’t waste too much time setting up the world and plot, getting players up and sending them on their adventure fairly quickly. The story sees the player character tasked with investigating some mysterious goings on in the kingdom of Nostria. A tutorial area introduces players to both the combat and exploration, including some exploration-based puzzles. After this, players are sent into the game’s primary large-scale area, which offers much more freedom and plenty of sidequests to sink their teeth into.

King’s Bounty II doesn’t try to establish a deep story at the outset, but provides enough motivation in its quests for players to follow them. The characters so far have been largely forgettable, and very little time devoted to examining anyone’s motivations. The voice acting is quite variable in quality, with some of the dialogue being very stilted. However, the fact it doesn’t waste time time in sending players to the more engaging gameplay elements is to its benefit. It may be as wider threats emerge and plot elements come together that the narrative comes into its own, but it seems happy enough in a supporting role so far, with much of the more interesting lore found in books and scrolls. 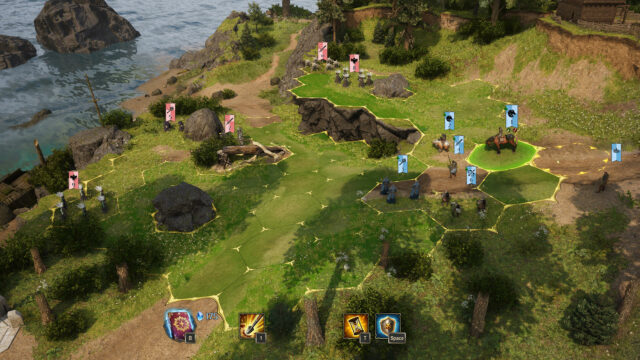 Paying attention to the turn order is an important part of combat.

The battle system doesn’t see the player character engaging opponents directly. Instead they sendg out up to five units from their army to do take on up to five enemy units on hexagonal maps. After battle, players have the opportunity to spend money to bring any units that lost part of their force back up to full strength, though any completely wiped out unit is lost and must be replaced. Though it may be less of a concern when players have built up their forces, there’s a danger of a Pyrrhic victory, especially if players are lacking in reserves and resources. The balancing has generally felt fair but challenging, with the game sufficiently punishing strategic mistakes and rewards smarter thinking. However, certain battles will offer large steps in difficulty compared to others nearby, so players may find themselves forced to carefully pick which ones to take on when.

Combat on the whole is engaging and moves along at a good pace, with each unit able to move and attack on their turn. During each combat round, the player character can also directly interfere using the spell book or whatever scrolls they have to hand, but otherwise they are largely there to act as the commander and provide bonuses. Paying attention to the turn order, indicated by number on each unit’s banner, is important as it can be easy to send a unit to find them swamped by enemies before the slower ones catch up. Choosing the correct units to go into battle with is also an important part of strategy, and it pays to be flexible, though the system of passive bonuses and the fact that individual units can level-up and get stronger as they fight means there’s always a trade-off.

1C Entertainment has done a good job making the world feel vibrant and populated. The opening areas have plenty of great views and lots of nooks and crannies to explore, each often housing some extra resources in barrels or chests and making it worthwhile to explore. Players have quick access to a horse and can fast-travel between various plinths dotted around the landscape, and there is a hefty selection of sidequests available for players to dive into. 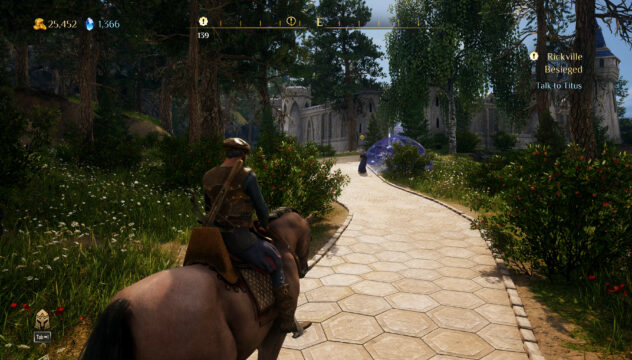 A horse is readily at the hero’s beck and call.

The game’s Ideal system, which sees the player character earning points in four categories — Order, Power, Anarchy, and Finesse — through their quest choices, affects both how quests play out and their character and army attributes. Players will want to create an army with units that match up towards their ideals in order to fully utilise their bonuses. It’s an interesting take on player choice and it helps give a feeling that there isn’t a binary good versus evil dynamic on the whole, though many of the individual quest choices feel like they have an obvious moral slant to them. Nevertheless, having the options there is welcome and gives appeal to making different choice in subsequent playthroughs.

King’s Bounty II should be able to find plenty of fans. The game has managed to strike a decent balance between exploration and combat, while the world itself is visually interesting with plenty of quests to undertake. RPGamers will get to dive into the kingdom of Nostria themselves when King’s Bounty II launches for PC, PlayStation 4, Xbox One, and Nintendo Switch on August 24, 2021.

Disclosure: This article is based on a free build of the game provided by the publisher.