What I’ve seen from King’s Bounty II stoked more interested than I was anticipating going in, and its systems look to be significant steps up from the previous titles.

The King’s Bounty series has an interesting history. The original game, designed by Jon Van Caneghem, came out for MS-DOS in 1990 and is the precursor to the long-running Heroes of Might & Magic series. After some ports, including a rather different Sega Genesis version, things went quiet until the late 2000s, when 1C Entertainment (then known as 1C Company) obtained the rights to the series and created a new set of titles beginning with 2008’s King’s Bounty: The Legend and followed by four standalone expansions. Now 1C Entertainment is returning to the series once again with King’s Bounty II, and RPGamer was able to check out some gameplay and learn more about the game from CEO Nikolay Baryshnikov and brand manager Iliya Svanidze.

King’s Bounty II looks to combine third-person open-world exploration with its traditional hex-based strategy gameplay. Players start the game choosing one of three protagonists, each with their own story, though the overriding arc of dealing with a mysterious blight afflicting the kingdom of Nostria and causing strife is shared between them. The three protagonists fall into the three fantasy RPG archetypes, with the gameplay shown focusing on the warrior option and starting with a quest to find some missing guards investigating hidden passages underneath a building in town. The guards were found fairly quickly, but so was a force of skeletons, allowing an immediate look at combat. 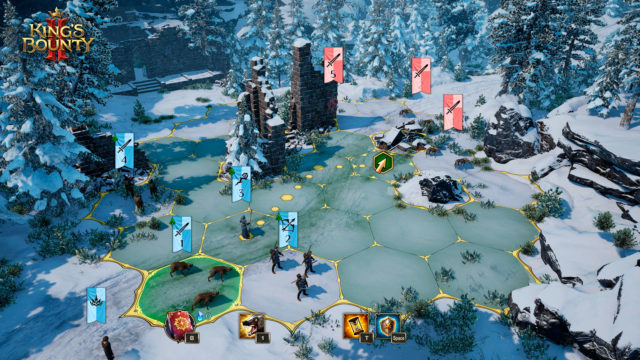 Players build up their own army of units throughout the game, with a wide assortment on offer, from regular human soldiers to magical elementals. In combat, which uses maps built on the areas players are exploring, each side can select and place five units. The player character does not directly participate in combat, but acts as a commander, providing passive bonuses as well as being able to cast a spell or use a scroll each turn. Turns are side-based, so the player will direct all of their units before the enemy’s units all get to act, and so on in that fashion until one side is defeated.

Positioning is more important than in previous entries as now elevation and the environment can play a part, including the addition of line-of-sight for ranged units. The developers are aiming to encourage players to keep mixing up their army; unlike the previous games, it won’t be possible to blast through by amassing an army of thousands of peasants and archers, and players will eventually want to replace their starting units with more powerful options. Players will also have to deal with battlefields of different sizes as well as potential enemy resistances and weaknesses, further making flexibility a bonus. While dealing with the blight and corruption, players will also encounter special battles where they control other armies, with one example shown seeing players controlling a dwarf army.

Though the player character doesn’t participate in combat themselves, their attributes, equipment, and character build all have significant impacts. King’s Bounty II features an Ideals system, with players able to spend Talent Points in one of four Ideals — Order, Power, Anarchy, and Finesse. Spending Talent Points unlocks or upgrades perks, with the Ideals helping to determine an effective sub-class for the protagonist’s main class. Each troop type within King’s Bounty II is also associated with one of these Ideals, and player characters that have spent more points in the same Ideals will be able to get more out of those troops in combat. Ideals can also have a role-playing impact, with certain groups more likely to agree with a player character of similar Ideals. 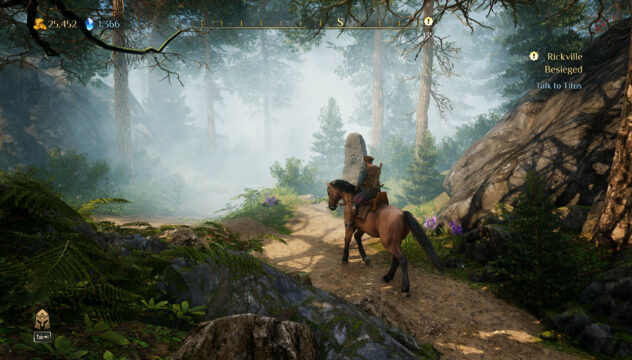 Between combat, the game plays much like other third-person open-world RPGs, complete with plenty of sidequests, areas to explore, and loot and resources to collect. The game map looks fairly large, and players have access to a horse for quicker travel between areas as well as a number of fast-travel points. Choice will play a large part in many of the game’s quests, with players often given multiple ways to proceed, which will result in different outcomes and different opportunities in future. Though the main quest and its conclusion is largely the same, the game encourages multiple playthroughs not only through the choices in sidequests but how the different protagonists play. Some quests even have different potential solutions based on which protagonist is being played.

The area of the game’s world that was shown is vibrant, with plenty of areas of interest and a good mixture of thriving plant life, medieval buildings, impressive marble, and more, with lots of hills and vistas overlooking mountains and lakes. The voice acting has a few stilted deliveries, though as many of the story and quest events were skipped it’s difficult to fully judge how it will hold up across the game at this stage.

What I’ve seen from King’s Bounty II stoked more interested than I was anticipating going in, and its systems look to be significant steps up from the previous titles. It will be interesting to see how well it manages to blend the different elements of third-person RPGs with strategy combat, but there isn’t long to wait to find out as King’s Bounty II is set to launch on August 24, 2021, for PC, PlayStation 4, Xbox One, and Nintendo Switch.