The Wirebug adds mobility and options that older titles lacked, yet it does not feel as instrumental as the clutch claw from Monster Hunter: World. This means that the new mechanic feels like a nice complement to the hunter’s arsenal rather than a required mechanic for success.

Standing on top of a rock formation, I survey the land. Thanks to the handy new Wirebug, I managed to pull myself up here rather quickly. The mini-map clearly indicates where my quarry roams, but I like to plan my approach. I see the bear-like Arzuros, fishing in the water for food, and I think I’ll call him “Smokey.”
Satisfied, I quaff down a buffing potion and jump on the back of my palamute, a dog-like companion strong enough to carry me despite the obnoxiously heavy gear I wear. He jumps down, with my palico not far behind meowing in glee at the prospect of a fresh hunt.

As we approach the creature, I jump off my mount and fire off a Wirebug wire to pull myself forward, just above the beast. I quickly slash at it with my weapon as I land on the other side. My hunting partners spread out, helping me to surround the creature. As Smokey rages forth, attempting to eviscerate its closest assailant, I pull out my bow and shoot it a few times in the back of the head. It stands on its back feet, roars, turns, and rushes to attack me with speed that defies its large size. I sidestep out of the way, charging my bow in the process, and nail it in the leg. This causes it to fall over, allowing me enough time to charge up a Dragon Piercer shot for massive damage.

After a few minutes of this dance, the winded creature attempts to run away. I rush at it, using the Wirebug to close the distance quickly. I then pull up into the air, point my bow down, and stun the creature with another shot to its cranium. This stuns Smokey just long enough for me to mount it, using the Wirebug to form reigns needed to control the creature’s movement and attacks. Looking at my map, I see my real target. A Great Izuchi wanders nearby. “Come,” I say to my hunting partners. “The real hunt begins!” 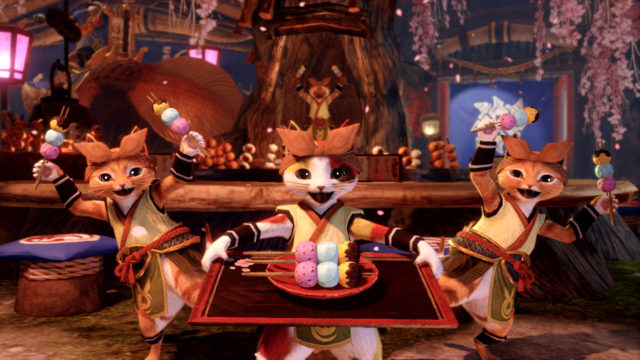 Welcome to Monster Hunter Rise, a follow-up to the insanely popular Monster Hunter: World, and the latest entry in the Monster Hunter franchise. In these action role-playing games, players track down monsters and turn them into fashionable, yet effective, weapons and armor. With this new gear, hunters are able to take on stronger creatures, yet tougher hunts require more than simple hacking and slashing with stronger gear. Good hunters prepare properly for each trek by creating foods and potions to heal, buff, and maintain stamina. No one hunts well on an empty stomach! Monster Hunter games lack any leveling up mechanics or individual character attributes. Passive skills and increases to all stats come completely from the player’s gear and created consumables.

While the Monster Hunter franchise has enjoyed a dedicated but growing following for some time, Monster Hunter: World opened the series to an entirely new and much larger audience with increased accessibility, enhanced graphics, and refined gameplay. Yet veterans longed for some of the deeper systems and greater variety found in older titles. When Capcom announced the development of Monster Hunter Rise, RPGamers tempered any anticipation with concern that Capcom would make compromises to what they enjoyed most about these older titles.

Thankfully, the demo addresses some of those concerns head-on. For example, hunters seek out their prey in a single, large, and explorable land instead of the partitioned areas the older games featured. The area experienced in the demo is much easier to navigate than some of the more labyrinthine hunting grounds found in Monster Hunter: World. Gathering reagents in the wild follows the one-button quick pick-up style introduced in World, as few RPGamers will miss the more drawn-out gathering animation and processes found in older games. Yet, if the demo is any indication, Monster Hunter Rise implements a deeper buff system along with a greater range of alchemy products, reminiscent of the older titles. Indeed, even the UI looks like it has been lifted from one of the 3DS Monster Hunter titles. 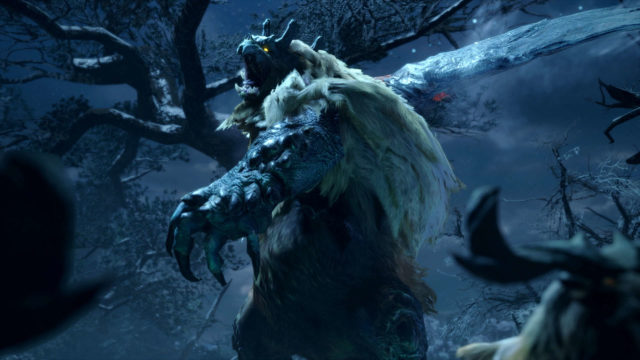 Expect some old favorites to return.

The demo shows off a number of new features hunters can expect in this new title. The Wirebug allows players to reach higher ledges, similar to a grappling hook. However, since the hunter grabs onto a magical insect, the same mechanic may be used to zip around an open battle field to get better positioning against a monster. Once a monster is worn down, hunters can also use the Wirebug’s glowing wires to tie it up, so they can mount and control the beast. In many ways, this feels like an evolution of the clutch claw and mounting mechanics.

Combat itself feels smooth and polished, as expected from the series. While the pacing and certain weapon combos give nods to the older games, Capcom also kept what worked from the previous game, such as the bow’s ability to charge up during a dodge. The Wirebug adds mobility and options that older titles lacked, yet it does not feel as instrumental as the clutch claw from Monster Hunter: World. This new mechanic feels like a nice complement to the hunter’s arsenal rather than a required mechanic for success.

While the environment offered in the demo lacks the complexity, graphic detail, and size of Monster Hunter: World, RPGamers will still find plenty of things to discover by carefully exploring every nook and cranny. Hidden passageways not shown on the map offer rare reagents and shortcuts around the zone. Utilizing the Wirebug, hunters can quickly reach the top of normally untouchable mountains and discover even more hidden secrets. Monster Hunter Rise utilizes Capcom’s RE Engine, making it a joy to look at as the detail seen in the environment and monsters rivals the vast majority of games on the Switch. The game ran at a steady 25-30 frames per second with no noticeable slowdowns in both handheld and docked modes.

Monster Hunter Rise releases on the Nintendo Switch on March 26, 2021.