Koei Tecmo has announced western release dates for Atelier Ryza 2: Lost Legends & the Secret Fairy. The game will launch for PlayStation 4, PlayStation 5, and Nintendo Switch in North America and for PC worldwide on January 26, 2021. The European PlayStation 4, PlayStation 5, and Nintendo Switch releases will follow on January 29, 2020. A limited edition is currently available for pre-order from NIS America’s North American online store or Koei Tecmo’s European online store for $119.99/£79.99 that contains — 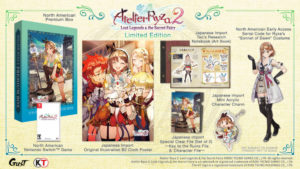 Pre-orders of the standard physical edition at selected retailers will also receive the “Beware of Puni!” and “Blue Puni Costume” Ryza t-shirt costume DLC. Those who purchase Atelier Ryza 2 physically or digitally during its first two weeks on sale will receive a code for the Summer Fashion Costume Set, while those who have save data from the first game can unlock the Classic Costume Set. In addition, those who purchase the PlayStation 4 version of the game will be able to upgrade to the PlayStation 5 version for free.

Atelier Ryza 2 is a direct sequel to Atelier Ryza: Ever Darkness and the Secret Hideout with Reislin “Ryza” Stout returning as the protagonist. The game sees Ryza depart her home of Kurken Island to travel to the Royal Capital of Ashra-am Baird and set up her own atelier to use as a base for her exploration of the land’s ruins.