In this edition of the column we take a look at the third title in MAGES’s Science Adventure series, which makes its western debut this month as Robotics;Notes Elite.

For a good while, it looked as though the visual novels in the Science Adventure series wouldn’t make their way west. However, the combination of the success of the anime adaptations — particularly Steins;Gate — and the rising popularity of visual novels has given the series its opportunity to shine, with Robotics;Notes being the latest title to head on over. Robotics;Notes Elite is an enhanced version of the original 2012 game, adding a few events and some improved animations, and its launch for PlayStation 4 and Nintendo Switch in Japan last year afforded Spike Chunsoft the opportunity to at least bring it over for western audiences. The game’s launch comes alongside that of its direct sequel, Robotics;Notes DaSH, which is planned for coverage in a future column.

Robotics;Notes is set in an alternate version of the year 2019, nine years after the events of Steins;Gate, where robotics are much more advanced and have more widely permeated society. It’s a distinct tale, so players do not need to have played (or watched) Steins;Gate to enjoy this particular entry, but there are a few major connections between them, which get further ramped up for the sequel. The game is set on Tanegashima, an island to the south of Japan, and follows the exploits of Central Tanegashima High School’s Robot Research Club, which aims to build a giant robot based on the incredibly popular (fictional) Gunvarrel anime series. Unfortunately, at the time the game starts, the club is down to two members: the robot-obsessed Akiho Senomiya and the main protagonist Kaito Yashio, who is only there as Akiho’s childhood friend and spends all of his time playing a fighting game called Kill-Ballad rather than helping. 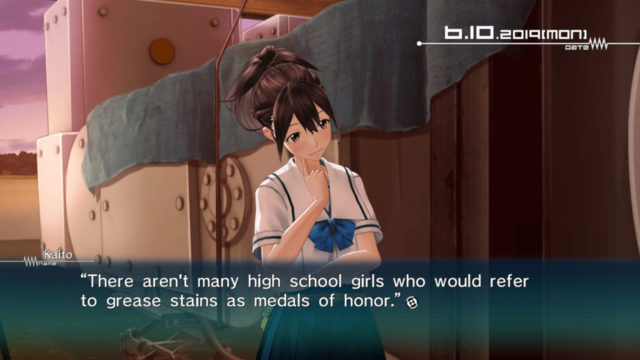 Akiho is not a regular heroine.

There are plenty of plot threads running through the game. As it begins, Akiho is desperately seeking both funding and members, which drives most of the first half of the game. Meanwhile, Kaito’s attempts to become the number one player in Kill-Ballad’s worldwide rankings eventually see him stumbling across an AI girl who inhabits a popular augment reality app called IRUO. This leads him to finding a set of reports that detail a worldwide conspiracy and a particular plan utilising solar flares, while yet other mysteries crop up concerning the sudden cancellation of Gunvarrel’s final episode and curious behaviour from Akiho’s elder sister. Also coming into play is Akiho and Kaito’s “Elephant Mouse Syndrome”, a condition that the two picked up after an incident on board a ship nine years prior that sometimes causes Akiho to witness time massively sped up, and for Kaito to similarly condense it.

Robotics;Notes’ main characters are a curious and ultimately entertaining lot, though there are times when their lack of social sense can begin to grate. Saying that, the game is largely about growth and it does ensure that all of the characters’ tendencies to hide behind their eccentricities are largely confronted by the end of the game. It’s also satisfying seeing the relationship between the characters eventually build up despite the missteps and difficulties along the way. The character growth stories are some of the best parts of the game, and Robot Club recruit Junna’s story is one of its high points with a surprisingly emotional tale of reconciliation and overcoming of misplaced guilt. There are plenty of entertaining and more humourous moments, with one character who will be familiar to series fans in particular really helping to brighten up the game at multiple points.

Robotics;Notes has multiple routes but is ultimately linear, with a clear singular order of events. While Steins;Gate used text-messages as its choice mechanism for routes, Robotics;Notes uses replies on its trademark-free Twipo social media network. The reply system is interesting and gives the characters more chances to naturally interact and display their personalities, but is also aggravating. The game doesn’t make it clear how the route process exactly works or what the order players should seek to unlock things as — despite the linearity of events — they all unlock from the same point in the game. The game at least comes with a welcome calendar option, so players can jump to any day in the story they have previously reached rather than having to rely on save files or unnecessarily skip through everything beforehand. Adding to the challenge of the route system are some parts where Kaito must manually search around a set of locations for a particular icon that can be very difficult to spot, though the game at least eventually provides an audio cue when he is in the correct location. 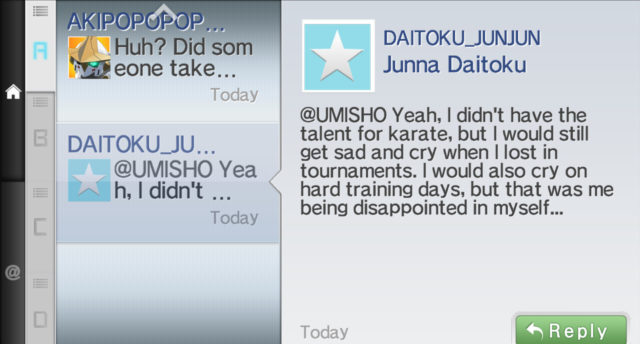 Responding on Twipo is the game’s somewhat obtuse “choice” mechanic, though it helps add to the characters’ personalities.

Robotics;Notes also suffers from one of the traditional caveats that come with the large majority of visual novels: there is a lot of navel gazing and it often takes much longer than it really needs to get to the point of certain events. On the other hand, there’s a sense of charm to its generally laid-back nature. Players will find that it can easily take forty hours or more to get through, so shouldn’t expect a quick tale. The game can also be rather obtuse at times with its talk of conspiracies and faux tech. In the end, however, it’s still an enjoyable and appreciably deep story that uses its emotional elements well enough to overcome those parts that feel particularly plodding.

Rather than the traditional visual novel portrait system, Robotic;Notes uses 3D models during the vast majority of its conversations and events. A few moments are given the full-sized artwork treatment, and some animated sections, though these are very brief and ultimately don’t feel like they really gain all that much from the animations. The 3D models on the whole look very nice and are pleasingly animated, giving life and illustrating the characters nicely. The backgrounds are also very pleasing to look at and successfully evoke the rural quietness of Tanegashima. Takeshi Abo returns to provide the game’s soundtrack, offering plenty of highly enjoyable tracks that go hand-in-hand with the visuals and make for a very pleasant listening experience. The game features full Japanese voice-acting, which is strongly performed.

While Robotics;Notes certainly doesn’t attain the same incredible level of Steins;Gate, it nonetheless offers a highly engaging tale with plenty of interesting threads. The character growth takes a little while to get there, but there are lots of enjoyable moments in the process and it successfully manages to tie together all of its plot threads in a rewarding manner. The obtuse elements make it challenging to offer an unreserved recommendation, but for those who enjoy visual novels, it’s a highly satisfying experience.