In this edition of the column we take a look at Guildlings, available now exclusively via the Apple Arcade.

The Apple Arcade is home to a wide variety of games, and that includes some interesting RPGs.  Guildlings opens with a simple story setup: Coda, the main character, has moved away from her childhood friends and is now on an island with her sister and father while he cares for a lighthouse.  A new phone, gifted to Coda, is actually an ancient tome which transforms her into a Guildmaster.  As Guildmaster, though she is trapped in a protective bubble and must now take the form of a wisp, it will be her job to recruit more Guildmembers and save the world.  The plot is absolutely outrageous, but as it stays internally consistent, it’s really quite fun.

Setting off into a world where goblins are as common as humans, Guildlings appears very similar on the surface to other RPGs – there’s exploration, combat, NPCs to talk to, and conversations to be had with Guildmembers.  The player will have a large variety of conversation options to choose from, which can directly impact the mood of current party members, and even grant experience.  As each party member levels up, their phone battery capacity will increase. 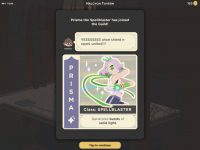 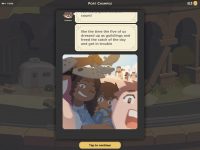 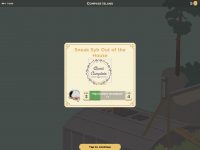 Both mood and battery life play a large role in combat, which is one of the strongest components of Guildlings.  Enemies have a finite number of turns, displayed at the top of the screen when the player enters combat.  Using abilities that an enemy is weak against will deplete one of their turn icons, and depleting an enemy’s final turn before it can be used provides bonus item drops, and is critical to completing many fights.  Each party member has their own class and abilities, which typically do not focus on attacking the enemy; instead these powers range from restoring battery life to changing and protecting the party’s mood.  Mood directly influences not only abilities and effects that can be used in combat, but also dictates whether each Guildmember can use their special talents outside of combat, which is very important for exploration and progression.

Players can expect the first episode to last around three hours, though with so many different choices, the game is highly replayable, and diving in a second time immediately after being left on an exciting cliffhanger teasing the second episode is highly tempting.  For those who simply must know what happens next, another episode is expected around summer 2020, and I can’t wait to see what happens next in the continuing adventures of Guildlings.