Arboria is one for roguelite fans to keep an eye on as its release approaches in 2020.

All in! Games and Dreamplant’s Arboria is an action roguelite planned for launch for PC via Steam in 2020, and RPGamer was given the chance to check out a demo version of the game. The game puts players in control of members of an underground tribe called the Yotunz, which faces extinction after its Father Tree, the source of life, becomes sick. These members are sent out into the world, via a hole in the middle of the village, where they must defeat enemies to gather a resource called Veri to send to back to their village.

The start of the demo gave a choice of three Yotun to start as, each potentially stronger in different areas, giving players a choice in starting points for their build, but not so much as to make it impossible to refocus elsewhere as the situation or loot found might dictate. After selecting the Yotun, there was a quick section in the village, albeit with little to do there at this time, before the jump into the hole and the randomly-generated cave system that the demo provides. This looks to make up the bulk of the game, as players search for the exit to the next part of the map while coming across plenty of chests and other items of interest to provide consumables or equipment that will help them defend themselves from the many threats lurking around. 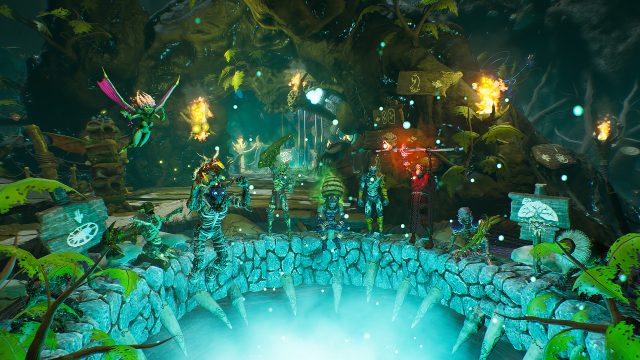 OK, throw him in the hole.

Players are accompanied by a fairy-type creature, which provides the tutorial instruction, but appears to serve its most important function when the player dies. Here, the fairy unceremoniously cuts off the Yotun’s head and brings it back to the village, where its experience and remaining Veri can be given to the Father Tree to help birth new Yotun. Depending on how successful players are in their previous runs, they may be able to ensure their next Yotun gets a better start as the cycle continues. Between maps, where they can send back their currently collected Veri, players also get the opportunity to level up and upgrade their current Yotun.

The game works with both keyboard-and-mouse and gamepad controls. On the 360 controller, attacks are assigned to the shoulder buttons; RB does a basic attack and RT a heavy attack with the current weapon, while LB and LR unleash sandard and alternate versions of the equipped special ability. Meanwhile, B is used to dodge, A to interact with anything in the environment, and X and Y to use consumables such as health potions. The third-person action combat seems a straightforward matter of getting in hits on enemies while simultaneously trying to prevent the opposite. It flows quite nicely, and it’s quite easy to get the hang of each weapon’s speed and range, while the dodge allows players to get out the way nice and efficiently.

A couple of elements stand out at this stage, but it is worth noting that it is an early demo with lots of opportunity for improvement before launch. Slight differences in elevation can easily cause attacks to miss that would normally hit, while the current content and set of enemies in those initial areas have the danger of becoming stale fairly quickly. The close camera angle also makes it a bit hard to keep track of multiple enemies at once, especially as those encountered in the demo were generally able to move quickly and freely. 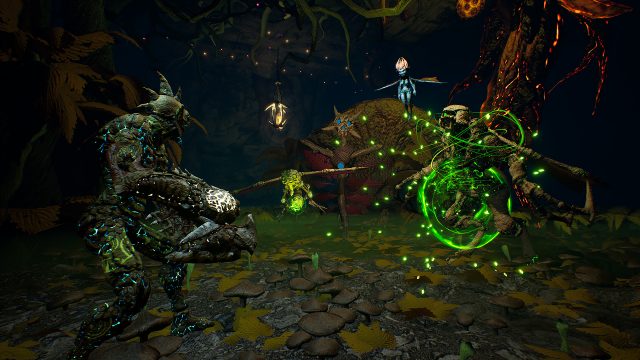 The fairy does what everyone would expect from their ally: chops off your head and brings it back.

Arboria’s dark fantasy theme and cave setting doesn’t hinder its use of colour. There are plenty of glowing elements of various hues and the connected rooms all have lots going on on the walls and floors. Outside of those few issues with elevation, the animations are strong and include some neat touches, such as how the symbiotic equipment attaches to the Yotun and changes the bodies.

With the demo being on the short side and primarily focused on the combat and exploration, there wasn’t anything glean about the story or how progress works across runs, making it difficult to give any judgement on Arboria at this stage. Producer Dominik Gnybek revealed that things like upgrading the village and giving weapons elemental effects such as fire and ice will help players as they go through they game. The challenge will be keeping players engaged fully and keep them coming back for more, but there is a nice pace to the early combat that will help prevent things from getting bogged down. Arboria is one for roguelite fans to keep an eye on as its release approaches in 2020.