Welcome back to the dystopian cyberpunk world first established in VA-11 Hall-A.  With the second game in the visual novel series, N1RV Ann-A: Cyberpunk Bartender Action, players are now taking on two characters — one being a bartender, much like the original game, and the other being…well, he’s going to have to figure out what he’s going to be.

Samatha (please, call me Sam) is the bartender at the N1RV Ann-A (commonly referred to as just ‘Nirvana’), a hotel infamously known for not being tied to any Syndicate families.  Also like the first game, the owner is apparently really scary…until you get to hear the stories behind their crazy actions, anyways.  Sam slings drinks from behind the hotel bar, and unlike the first title, this bar doesn’t bother with synthetics.  The players will have a much larger number of ingredients, numerous kinds of alcohol and non-alcoholic liquids they’ll need to learn to mix like a master.  There’s always a handy recipe book for those who struggle to remember drink orders, or want to focus more on the social aspects than the boozy ones. 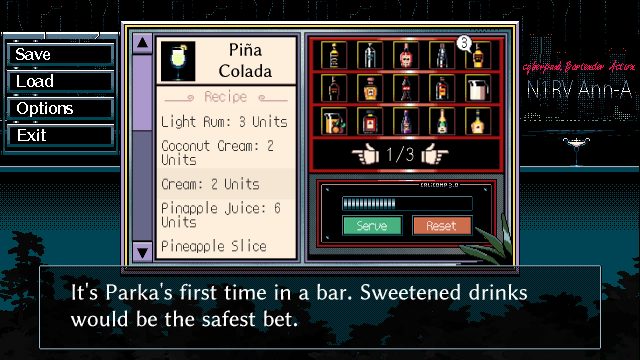 The social side of the game has also seen some serious polish and buffing.  Now, when NPCs bring their troubles sidling up to the bar with them, Sam has options as to the type of response she gives.  For example, when new client Olivia walks up and is rude towards Sam, the player has the choice to respond in a friendly manner, or be a little dour in return.  Later in the conversation, as Olivia grouses about her job, Sam can be friendly, flirty, or disapproving towards her.  This gives an interesting depth to the game, as it’s clear different customers will appreciate different attitude quirks.  Unfortunately, the demo ended after Olivia passed out from too much booze, so more information on the second character, Leon, will need to wait for a future time.

N1RV Ann-A has the same comforting feel that VA-11 Hall-A: Cyberpunk Bartender Action also possessed, but with an increased level of challenge in drink serving and choosing how to react to queries from clients, and it’s clear even from the short demo it’s a game that intends to pull on many heartstrings.   Launching in 2020 for PlayStation 4, Nintendo Switch, and PC via Steam, here’s hoping more details on the plot and playstyle will be served up in the near future.  Cheers! 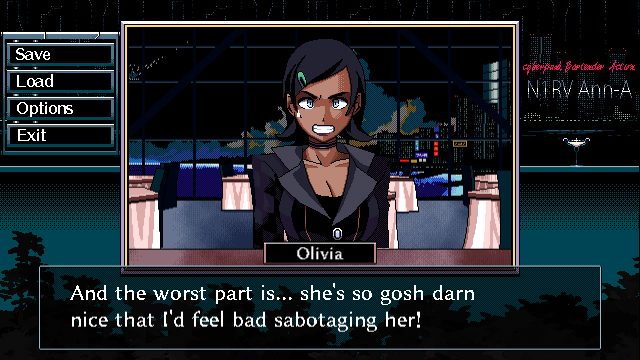