There’s a good base to build upon, while the graphical style and narrative have plenty of interesting elements about them, and the developers clearly have a lot of passion for it.

Ysbryd Games and Glitch Factory’s No Place for Bravery is a top-down action RPG following grizzled warrior Thorn on his search for his daughter Leaf. The game received a demo for PAX Online and RPGamer was given the opportunity to chat with Glitch Factory’s Matheus Quieroz and Tulio Mendes as well as Ysbyrd Games’ Jacob Burgess after trying out its very punishing combat.

To get the biggest issue out of the way first, the demo for No Place for Bravery is very hard. Small mistakes are gleefully punished, and the game shows that it is not for the faint of heart within its first few battles. There are certainly those who will relish the challenge, but equally there will be those who will find it frustrating. However, the developers revealed that the difficulty is very much one of the things the demo is being used to get feedback for and they have already identified a need for change on this front. The intention is to provide players with a challenge, but the developers will be looking to ensure players are able to enjoy the game’s story.

The combat system itself is relatively straightforward, with regular attack and dodge buttons, plus a couple of more powerful attack options that use up a stamina meter. As players travel through locations, they come across enemies to defeat in fairly fast-paced combat, with the team looking find a nice sweet spot between hack-and-slash action RPGs and the slower Souls games. Though players can defend, the game is really about managing to avoid getting hit, sussing out the tells of enemy animations and behaviours to move out of danger or take the opportunity to strike. 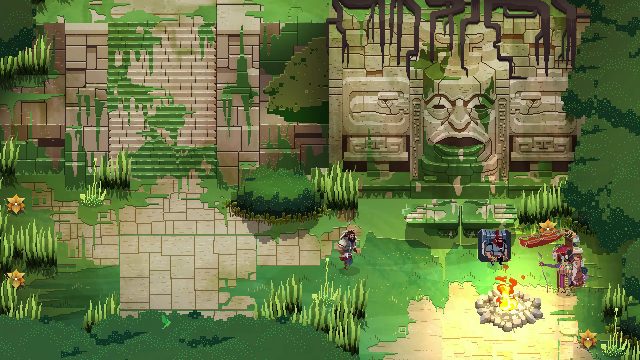 The game looks like it will offer plenty of striking locales.

In the full game, players will have access to multiple different weapon types. Rather than Thorn getting more powerful stat-wise as the game goes on, the developers compared No Place for Bravery’s progression to a Metroidvania; as they go through the game, players will find skills, weapons, or items to open up paths and expand the world. The game starts linear but will open up into multiple paths for players to explore.

The narrative and lore will be a large and important part of the game, though the developers were hesitant to reveal any major details to avoid spoiling anything about the story. Some of the team’s personal stories and experiences, particularly related to parenthood, are big influences on the plot. No Place for Bravery’s setting is clearly not a pleasant and peaceful place, and the environment itself will tell plenty of stories. The game’s pixel-based art style definitely gives its world a unique feel, with lots of interesting architecture, ruins, and the bodies of long-past gigantic beings. A noticeable amount of effort has been put into the animations, and it shows.

Given that the demo’s difficulty is unlikely to be representative of the final product, it’s hard to make any true conclusions about No Place for Bravery at this stage. Nevertheless, there’s a good base to build upon and the graphical style and narrative have plenty of interesting elements about them; the developers clearly have a lot of passion for it. No Place for Bravery is currently planned for release on PC and Nintendo Switch in 2021.