The Pokémon Company has released new details and media for the latest generation of Pokémon titles, Pokémon Sword and Shield. The update introduces the new feature of Gigantamaxing, an extension of Dynamaxing, as well as new characters, Pokémon, and details about the Galar region’s Gym Challenge and Pokémon League.

There are four newly-revealed Pokémon. The first is Alcremie, the Fairy-type Cream Pokémon, which produces whipping cream that becomes richer the happier Alcremie is. The second is Yamper, the Electric-type Puppy Pokémon, which has the new ability Ball Fetch that lets it retrieve the first Poké Ball thrown in a wild encounter if it failed to capture the Pokémon. The third Pokémon is the Rock-type Coal Pokémon Rolycoly, which used to be commonly owned families to use the coal it drops for heat and cooking. The final new Pokémon is Duraludon, the Steel/Dragon-type Alloy Pokémon, which shares it habitat and often battles with Tyrantitar in Galar’s mountainous areas. 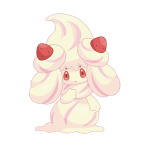 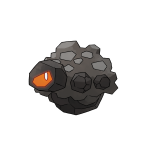 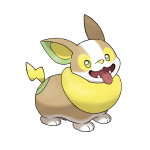 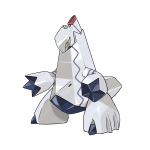 While Dynamaxing is a relatively common ability among Pokémon from the Galar region, Gigantamaxing is much rarer. While Dynamaxing causes Pokémon to become enlarged, Gigantamaxing builds on this by having the Pokémon’s appearance change as well as providing access to even more powerful moves called G-Max Moves. Only certain species of Pokémon have a Gigantamax form — with examples given being Drednaw, Corviknight, and Alcremie — and even within these species only rare specimens actually have the ability to take it.

Galar is a region where Pokémon battles are widely followed and regularly broadcast on TV. Its Pokémon League holds tournaments to determine the region’s champion and also hosts the traditional Gym Challenge. Trainers are tasked with collecting eight badges by defeating specially endorsed Gym Leaders. During the Gym Challenge, trainers wear a special numbered uniform, with players can able to choose the three numbers that identify them. The champion is determined by the annual Champion Cup tournament, which is attended by specially invited trainers, including those who complete the Gym Challenge.

Leon is the current Galar Pokémon Champion. He is immensely popular and became Champion the same year he completed his first Gym Challenge, without losing a battle. His main partner is Charizard. Chairman Rose is the leader of the Galar Pokémon League and a wealthy businessman, who brought the Pokémon League into popularity by implementing Dynamaxing in Gym battles. He is assisted by his secretary and his business’ vice-president Oleana, who does most of the day-to-day running of Rose’s company. 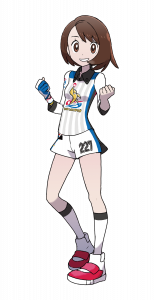 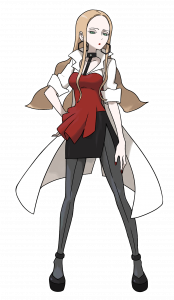 Also announced were some version-specific elements to the games, including one of each title’s Gyms. Pokémon Sword will feature Bea as one of its Gym Leaders, who is an expert with Fighting-type Pokémon. Those in Pokémon Shield, however, will face off against Allister, who is a Ghost-type specialist. Some version-specific Pokémon were also revealed. Deino and Jangmo-o will be exclusive to Pokémon Sword, while Larvitar and Goomy will only appear in Pokémon Shield.

Pokémon Sword and Shield will be released simultaneously worldwide for Nintendo Switch on November 15, 2019. A physical double-pack containing both games and a SteelBook is available to pre-order. Those who pre-order the SteelBook double-pack will receive a code for each game that lets them fight and capture Dynamax Larvitar and Dynamax Jangmo-o in special Max Raid Battles before they are normally encountered.