I have a feeling that Werewolf: The Apocalypse – Earthblood may turn out to be one of the most misunderstood games in recent memory to come through E3, following other supernatural-themed RPGs like Vampire: The Masquerade and Call of Cthulhu, the latter even stemming from the same development studio. Admittedly, I have no prior knowledge with the World of Darkness role-playing universe it’s based on, and so was not personally familiar with the terms and themes used within its world during the last couple of E3 meetings we’ve had about it. Despite the ferocious and horrific depiction of werewolves in popular media, this game is not all about its body count and amount of blood spilled. This year, the game was finally able to be shown, and it was definitely nice to finally put a face with the name.

For the uninitiated, Werewolf: The Apocalypse – Earthblood casts the werewolf, or at least the protagonist Cahal, as the good guy. A tough, denim-clad biker type when in human form, Cahal and his fellow lycans are on the side of nature, fighting to preserve Earth’s natural balance, though this does occasionally require destructive means. They fight against the evil corporations of the world, controlled by an entity known as the Wyrm, who are bent on the planet’s destruction in the name of profit. 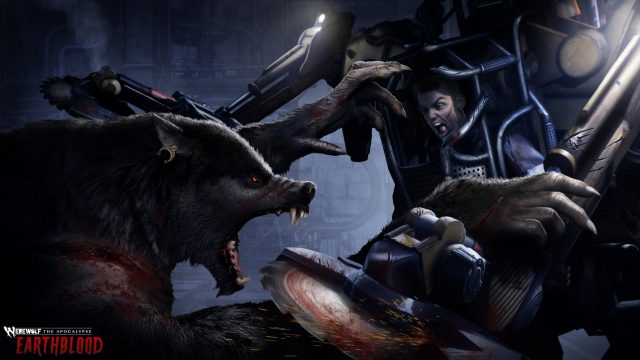 The game is a third-person action RPG with both hand-to-hand combat and dialog-heavy sections of role-playing. The story itself, however, is not an immensely twisted, branching undertaking based on player choice and consequence, but rather a bit more on the linear side with two distinct endings available. The hands-off demo incorporated two scenarios, the first of which saw Cahal under the merciless Nevada desert sun, approaching a power plant that is corrupting its surroundings with the intention of disabling it. Using a special Penumbra vision mode, Cahal is able to determine what areas and buildings are spreading the bulk of the corruption, and focus his sabotage efforts there.

Combat in Werewolf: The Apocalypse – Earthblood is a brutal and bloody affair. At any time, Cahal can shapeshift to lupine wolf form for its speed and agility, and, of course, into werewolf form for its lethality. Taking advantage of the werewolf’s strength, however, comes at a cost since it also opens Cahal up to the corrupting influence of the Wyrm. Shifting back and forth in short bursts, we watched as he took out the hapless armed guards at the power plant, eventually running afoul of a surprise adversary: another werewolf, this one corrupted by the Wyrm, a servant to the enemy. This battle was quite a bit more feral, with faces bashed in and limbs snapped and severed left and right.

Werewolves like Cahal wage a never-ending war against their inherent rage, represented by an on-screen meter. Should Cahal indulge his ferocious side, or come across a particularly egregious offense against nature, his Rage meter will rise, eventually causing him to lose control of his animal side and be unable to change back into human form. This can lead to some troubling complications down the line as it restricts his ability to communicate verbally, so the game is very much about walking that tightrope of emotional restraint. 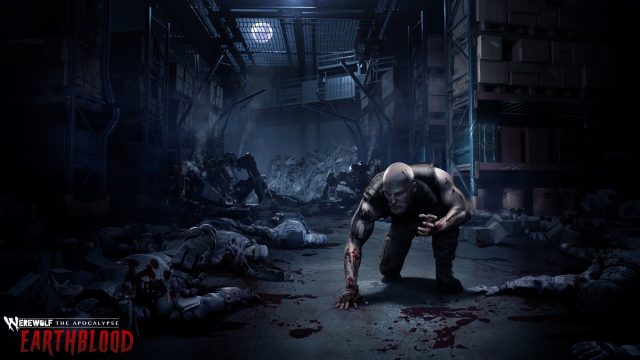 A second demo scenario was also briefly shown, this time finding Cahal in a nighttime forest, overlooking a river dam below. As Cahal stared from a cliffside at the man-made blight below, forest-dwelling wolves and bears took up their places on either side of him, coexisting peacefully with their protector. The theme of being one with nature, of serving its whims, was made even clearer when we approached one of the quest givers in this area: a large, centuries-old oak towering within a forest clearing. Even the game’s skill tree menu is designed with nature in mind, resembling a tree stump cross-section, with the outward-expanding rings representing successive character abilities.

Though the game wasn’t yet playable for us, Werewolf: The Apocalypse – Earthblood is slated for a release next year. The game is being developed for PlayStation 4, Xbox One, and PC.