I think Mighty Kingdom’s Conan Chop Chop is one of those “what it says on the can” games; the title pretty well sums it up. With a stick-figure art style, it’s not miles away from looking somewhat similar to The Behemoth’s 2D beat-em-up, Castle Crashers. With four-player couch co-op, it’s a game that lends itself best to experience with others, sitting around a table of snacks, having a great time smashing heads and swearing allegiance to Crom. In the absence of three other players, I sat with the studio’s executive producer Kim Forrest, and together we got our joint asses handed to us by the brutish dungeon boss. Oh yes, the game is hard.

The game lets you take control of one of several characters lifted straight from Conan‘s fictional universe, including the Hyborian himself. Rather than having preexisting character classes, all avatars are equal in strength, differentiating themselves only via player choice of what weapons and armor to purchase, and which artifacts to equip. I settled on the warrior queen, wielding a large blade soon upgraded with the ability to poison enemies. There are no levels or other such traditional RPG elements. Our party took on a quest in the village and proceeded traveling around the world screen-by-screen a la 1986’s The Legend of Zelda, entertaining ourselves by finding loot, slaying beasts, and maybe finding the dungeon entrance. Some areas were inaccessible due to sandstorms or high temperatures, hinting at some further exploration later in the game. 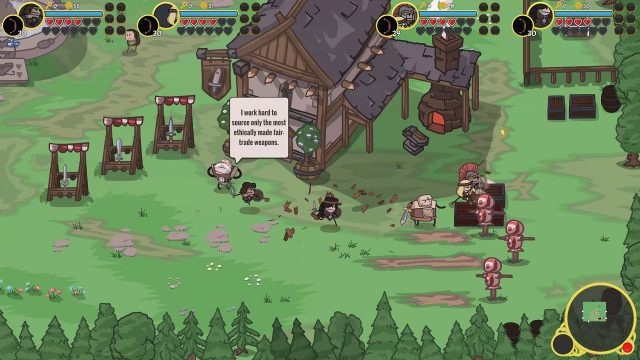 Eventually, we were able to fight our way through the dungeon to its boss, Thak. Conan Chop Chop incorporates some roguelike elements into its world and dungeon design, randomizing layouts. Like the overworld, dungeons are purely combat-centered, eschewing puzzle elements. Even prepared as we were, felling Thak was no easy undertaking, and I’m sad to say that we were unable to emerge victorious, even after several attempts, though we did get very close. Should an ally fall, it’s possible to resuscitate them via a button-mashing mini-game, but good luck finding the time to pull this off in the middle of a brutal boss battle.

Given some more time, I would have gladly went for another round with Thak, and even more so had a few others joined in. The game shines brightest when there are others around to yell and joke with. Armchair barbarians will still have to wait until September 3, 2019, before Conan Chop Chop releases for PC, PlayStation 4, Xbox One, and Nintendo Switch.