Square Enix held its keynote presentation at this weekend’s Final Fantasy XIV Fan Fest in Tokyo, wherein producer and director Naoki Yoshida provided many more details regarding its upcoming Shadowbringers expansion. The keynote began with the reveal of the full-length, six-and-a-half-minute trailer for the expansion, which can be viewed below.

The first details revealed concerned the setting for the expansion: The First. Over 10,000 years ago, Hydaelyn was split into fourteen dimensions. The world that players currently inhabit is known as The Source, which is the original realm. Shadowbringers will see players transported across dimensions into another known as The First. The First has been referenced before, as part of the Warriors of Darkness arc in the 3.x series of patches for Heavensward.

Shadowbringers sees player visiting The First for the first time, where the realm has been swallowed by the Flood of Light. The only place that remains is the region of Norvrandt. Players will aim to restore darkness to the realm, however, the conflict with the Garlean Empire will be raging in their absence. Yoshida promised that the story would primarily concern the Ascians and Zodiark threads that have been lingering since A Realm Reborn and will provide some answers to those. Square Enix recently announced that patch 4.56, A Requiem for Heroes Part 2, will go live on March 26, 2019, and effectively acts as a prologue for the Shadowbringers storyline, providing the final section of main story content before Shadowbringers‘ release.

Naoki Yoshida showed off some of the areas of Norvrandt. The region’s hub city is the Crystarium, which was built around a massive crystal tower, which plays a key role in the story. There is also another town called Eulmore. Eulmore is home to the affluent citizens of the First, who have decided to wait for the end of the world living in luxury rather than attempting to fight against it. Also shown was a massive new area adjacent to the Crystarium called Lakeland.

There was a quick reminder of some of the previously-revealed details for the expansion from the keynotes in Las Vegas and Paris. The level cap will be rising from 70 to 80; the combat system will undergoing some maintenance, removing and adjusting various skills, etc.; there is a new tank job called the Gunbreaker. There will be a lengthy Letter from the Producer presentation in May that will detail all of the changes planned to the combat system. There will also be nine new dungeons in the game, with a few screenshots shown. Shadowbringers will also include a Trust system, where NPCs can join the player in Shadowbringers‘ dungeons, as well as the New Game+ and World Visit systems, restoration of Ishgard, new end-game crafting and gathering content, and the YoRHa: Dark Apocalypse raid series.

Following this, the second new job in Shadowbringers was revealed: Dancer. Dancer is a ranged DPS that uses throwing weapons such as chakrams or shuriken. As with Gunbreaker, thre is no associated base class, it is tentatively set to start at level 60, and players will not need to progress through the Shadowbringers storyline to unlock it at Limsa Lominsa. Abilities are exectued by dancing, and some will let players act in a support role and boost party members.

Shadowbringers will also include a new Beast Tribe: the Dwarves. They are never found with out either their helmets and beards and are mining and meallurgy experts. In fact, the Dwarves are The First’s version of Lalafell, and this leads to the reveal that all of the races in the Source have different names in the First. Hyur are called Humes, Miqo’te are Mystel, Elezen are Elves, Roegadyn are Galdjent, Au Ra are Drahn, and Lalafell are Dwarves.

Some of the new enemies in the first were revealed and are known as Sin Eaters, or the Scourage of the First. These are effectively the counterpart to the Void monsters that have appeared in the game. A particularly powerful foe was shown and named as Innocence, who plays a large role in the 5.0 storyline.

In addition to YoRHa: Dark Apocalypse alliance raids, there will also be a high-end regular raid series. Shown was an artwork of a sappling growing in a desolate landscape along with the name of the series: Eden. The Eden series also features guest character and boss designs from Tetsuya Nomura, with one of his designs shown for the character Gaia. 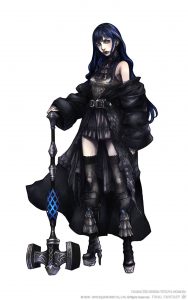 As announced in Paris, Shadowbringers will add the Viera race, but it will also include another new race, the Hrothgar. The two playable races will be gender-specific, with the Viera being female and the Hrothgar male. The Viera are known in the First as Viis, while the Hrothgar are known as Ronso.

Final Fantasy XIV: Shadowbingers is set to be released on July 2, 2019, for PC and PlayStation 4. Those who pre-order the expansion will be given early access to the content from June 28, 2019.