She Dreams Elsewhere is one hell of a gut punch. It deals with topical issues like anxiety, depression and social isolation by showing what it means to suffer within your own mind. I recently had the chance to sit down with the game’s two-hour demo, and I have a lot of feelings in regards to the subject matter. Hold on tight.

This is a game about social isolation, impostor syndrome, and above all else, suffering anxiety on a day-to-day basis. Thalia, our heroine, begins the game fighting her inner demons who are demolishing her self-worth. Failure, phony, screw up — these are the constant slings of insults that her mind has cooked up. Thalia suffers because she does not have the tools to climb out of this reality that she has, in a lot of ways, created for herself.

After escaping her dreamworld briefly, the player is transported to her bedroom. Her friend, Amia come by her place, trying to remind Thalia that she needs to get out and be social and invites her to a party. Thalia spends the next few minutes using self-deprecating humour as a means to cope with her emotions. Her dog Laury attempts to warn her about leaving the house, but Thalia forces herself to go to the party anyway. Dragging herself to the party reignites Thalia’s inner demons. Paralyzed by her social anxiety, she makes an excuse to ditch. Upon leaving, she sees Laury again. He leads her out of the apartment complex and into the world of Oblivion, a creation of her mind. 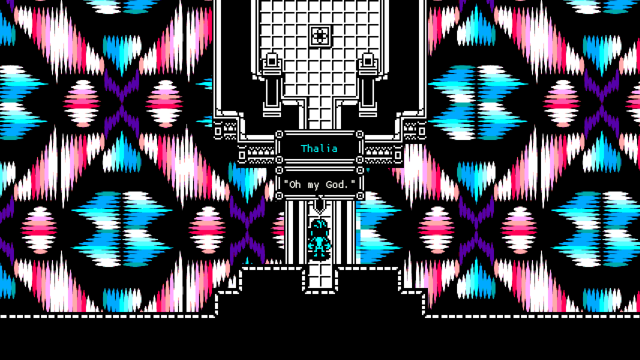 This introduction to Thalia and her anxiety is heavy, uncomfortable and for those who suffer from the illness, feels all too real. The excuses to get out of social situations, the feeling of being locked up entirely in your own mind, the assumption that everyone hates you or feels better when you are not around — these messages are bullshit. However, for many like Thalia, this is normal reality, and one that is difficult to navigate. This is a game about mental health and the way in which it can destroy your life and others. For players who are anxiety sufferers, this is going to be a hard game to play, but I have a feeling there’s a good message hidden in here.

Combat is a turn-based affair, wherein Thalia must fight her inner demons. She has a variety of skills, like the ability to cause “sick burns” or freeze enemies in their place. If Thalia can hit the enemy’s weakness twice in a row, it stuns them out of a turn. This can be very helpful for ensuring that the tide of battle works in the player’s favour. When Thalia or her party members are hit or stunned by enemies, their limit points go up. Once they hit a hundred, Thalia and her companions are able to unleash a devastating attack. The combat is fun, but it felt a bit too easy at times. I don’t feel like combat is the main draw for this game. 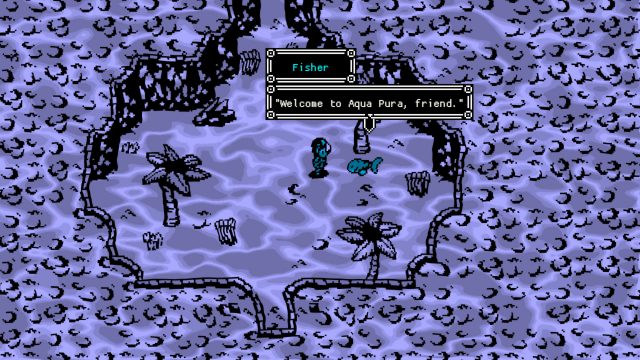 A lot of my experience with She Dreams Elsewhere is that it was a lot of exploration and story, which is what I would want from a game focusing on mental illness. I love and appreciate games that are not afraid to discuss harder-hitting topics or create large extended metaphors for the player to contemplate as they roam around the dungeon. Save points are sweet little doggos who are happy to provide you with tips in exchange for noggin’ pats, and, like Thalia, I would do anything for my furry friends.

I love the graphics in this game, and I appreciate that the majority of them are monochromatic. I think it offers a good sense of the emotional overtones that She Dreams Elsewhere shares with its player. It definitely borrows its style from games like Undertale or Earthbound, and it’s appealing and works very well. The soundtrack offers levels of discomfort for the player as well, adding to the overall package.

I felt depressed playing She Dreams Elsewhere. It’s not often I can say that playing a game, but I am hopeful. As someone who has gone to therapy and has been working on their inner demons for years, a lot of Thalia’s frustrations in life were things I could easily relate to, and I know others will once they’ve had the chance to give the game a try. I found on an emotional level I truly connected with aspects of this game, but I wish the demo hadn’t entirely been doom and gloom. What it lacked (which I am sure the finished product will provide) is a sense of hopefulness and recovery.

These were two hours of my life that reminded me of my own darkness, and that’s not necessarily a bad thing. I am intrigued by the concept and the story, and I am looking forward to going through the final product when it releases in 2019. Damn though, it’s heavy.